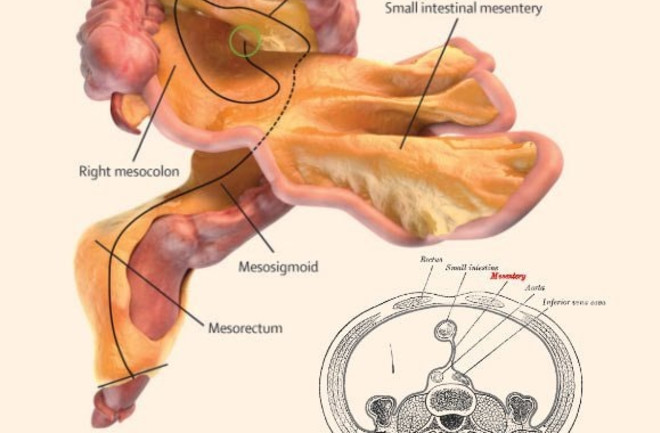 To the 78 organs that make up the human body, a group of scientists says we should add one more: the mesentery.

Located in our abdominal cavity, the mesentery is a belt of tissue that holds our intestines in place. While anatomists knew it was there, it was always thought to be composed of several different segments, as opposed to being one single structure. This knocked it out of contention for organ status, as our bodily organs must be continuous, as well as provide some vital function to our anatomy.

Read more: The Mesentery Isn't the Organ You Think It Is

A new study from researchers at the University Hospital Limerick reveals that the mesentery is actually one single band of tissue, beginning at the pancreas and continuing down through the small intestine and colon, wrapping around these vital organs to hold them tight and help them maintain their structure. It is made of a folded-over ribbon of peritoneum, a type of tissue usually found lining the abdominal cavity.

“Without it you can’t live,” says J. Calvin Coffey, a Limerick University Hospital researcher and colorectal surgeon. “There are no reported instances of a Homo sapien living without a mesentery.”

It was by peeling away the peritoneum and repeated observations that Coffey built his case for the mesentery. In 2012, Coffey’s team determined the mesentery was indeed a single, connected structure. In this most recent study, published in The Lancet, Coffey’s team outlines evidence collected over four years that it says affirms the mesentery’s organ status. The mesentery is highly integrated with the intestine, he says, and is located in an area of the human body that has not been fully explored — we still, apparently, contain new frontiers.

And, according to The Independent, the seminal medical textbook Gray’s Anatomy was updated in 2015 to include the new definition of the mesentery. However, Coffey isn’t exactly sure when an organ is officially an organ.

“That’s a fascinating question. I actually don’t know who the final arbiter of that is,” says Coffey.

In apes and other creatures that walk on all fours, he says that the structure of the mesentery, and the organs it supports, is slightly different, which affects the layout of their guts. Understanding how and why our digestive system is arranged the way it is could be crucial to our understanding of diseases like Crohn’s and irritable bowel syndrome.

“There are a lot of disease that we are stalled on, and we need to refresh our approach to these diseases,” Coffey says. “Now that we’ve clarified its structure, we can systematically examine it. We’re at a very exciting place right now.”

The era of mesenteric science has taken a new turn.