The Inheritance of Syphilis

The mother gazes at her naked, lethargic infant, wan with a pustular red rash dotting his chest. She’s dressed in the fashion of the day: a high-necked black blouse with leg-of-mutton sleeves, a heavy full-length skirt, a formless red feather jutting from her hat. She holds a white handkerchief to her distorted scarlet face, one arm hanging limply at her side, seemingly in despair over the lamentable circumstances that have brought her to this bare waiting room. The Norwegian expressionist Edvard Munch worked on his painting “The Inheritance” in the years 1897 to 1899, and the work shocked society with its portrait of a mother and child infected with syphilis. It was a frank and unsettling depiction of the taboos of that time, of sex and sexually transmitted diseases, of infidelity and prostitution. The painting was a grotesque inversion of the classic “Madonna and child” motif, an unflinching look at the transference of the sins of the mother (1). 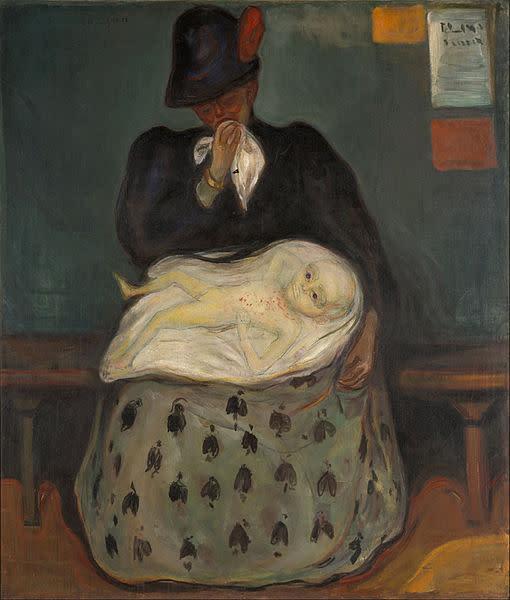 Syphilis is among several disfiguring and potentially fatal infections that can be passed on from mother to child, surreptitiously “inherited” with the mother’s genes, mitochondria, and antibodies. This bacterial infection is, at its onset, insidious in its subtlety, often presenting in the form of a painless sore on the genitals that disappears within weeks. Having dipped beneath the surface, syphilis can go on, over a period of years, to ravage the body as it infects the spine, impairs the ability to walk, and disfigures the face with weeping boils before it proceeds to ravage, too, the mind. Syphilitic ulcers are known as “gummas,” destructive lesions that erode the tissues and skin of the body, affecting the heart, liver, brain, blood vessels, and nervous system. The bacteria can attack the face, leaving cratered necrotic holes where a nose, a set of eyes, or a mouth ought to be. In its final stages, known as tertiary syphilis, the infected can go blind, become paralyzed and develop dementia before dying an agonizing death. The disease is just as disfiguring and deadly when passed onto those in utero. The symptoms of congenital syphilis included a vesicular rash, anemia, hydrocephalus of the brain, inflammation of eye, and a runny nose with secretions laden with syphilitic bacteria (2). For those so-called “syphilitic runts” that survived into childhood, their faces and body would bear the characteristic deformities of the disease: a collapsed “saddle” nose, notched front teeth, bow legs with swollen joints, deafness and blindness (3). For an artist whose work was infused with horror and dread, the grim ravages of syphilis on the mind, body, and family seem an apt and provocative subject. Edvard Munch is classically known for one of the world’s most recognizable pieces of art, “The Scream.” As typified in his most famous piece, his vast ouvre frequently featured ghastly figures and melancholy scenes of fear and isolation. Several of his artworks depict grieving forms hovering over the sick and dying in pieces such as “The Sick Bed, Spring,” “The Sick Child,” “By the Death Bed,” and, of course, “The Inheritance.” 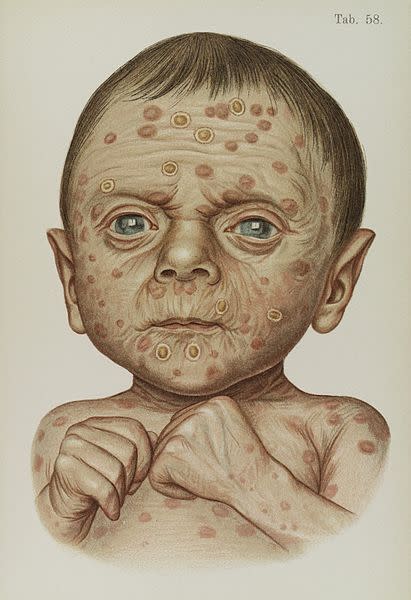 A lithograph from 1898 of an infant with congenital syphilis, illustrating many of the symptoms of the disease, including pustules, inflammatory keratitis, and wrinkled skin. Image: Wellcome Library, London. Click for source. Munch once wrote, “For as long as I can remember I have suffered from a deep feeling of anxiety which I have tried to express in my art.” The anxiety was laced with the fear of illness, both physical and mental, and of dying and death. During his childhood, his mother and a sister died of tuberculosis (4). Another sister was diagnosed with a mental illness in her youth, spending much of her life institutionalized, and Munch thought his physician father so consumed with religion that it reached a “point of neuropsychosis” (5). He himself believed that his own diseases of madness and obsession were inherited, and he would write in his journals that “illness, madness and death were the dark angels who watched over my cradle, and have accompanied me throughout my life.” These deep anxieties form the motifs that infuse and define his gloomy artwork. That Munch lived in an era of poor sanitation and disease can have been of little comfort to the artist. In the 1800s, the consumption, which we now recognize as tuberculosis, was afflicting millions across Europe in what was described as “the white plague.” Syphilis, too, was a deeply feared illness in Munch’s time - in some parts of Europe, an estimated 10% of men carried the infection. It was this insidious plague and a fateful trip to a hospital for syphilitic patients that inspired Munch to paint “The Inheritance.” In the mid 1890s, Munch visited the Hôpital Saint-Louis with a physician friend, one of just three hospitals in the cityof Paris (6). Besides providing treatment for people infected with syphilis, the Hôpital Saint-Louis also contained an impressive museum collection of moulages, wax models used to teach anatomy to medical students and artists. These moulages presented various dermatological conditions, one of them depicting an infant with congenital syphilis. It was in the same hospital, too, that Munch saw a woman with a young child “crying in the hospital for venereal disease”(6). 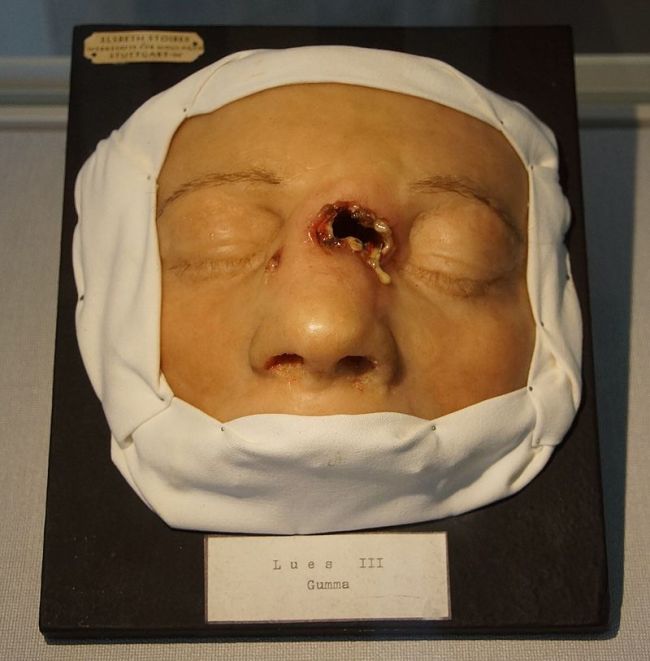 An example of a wax moulage. This 1950 piece shows a gumma lesion of tertiary syphilis and belongs to the Museum of the University of Tübingen (MUT). Click for source. Art historian Shelley Wood Cordulack comments on the physical manifestations of the disease in the figure of the mother, with her disfigured and reddened visage:

Munch’s choice of details, including the colors, underlines the figures’ pathological physiology: the crying mother with her black and flatly painted jacket that de-emphasizes her nourishing function ... The bright red plume on the mother’s hat accentuates the acuteness of both disease and emotional trauma. The focus of the painting is the ghastly body of an infant who has inherited syphilis from his mother, either a woman infected by a philandering husband, or, perhaps more likely, herself a prostitute (6).

From its arrival in Europe in the 1400s up to its effective treatment with penicillin the 1940s, syphilis ravaged society and destroyed families. The infection was transmitted through physical intimacy: one became infected by a sexual partner during a youthful dalliance or in a fit of infidelity, and it was then delivered to one’s spouse and then tragically transmitted by the mother to the unborn. For centuries, syphilis was considered a blight to society and to good morality, an infection of depravity transmitted through generations of families. "The Inheritance" is a plaintive examination of the pain, confusion, and loss bred from immorality. Munch, a man keenly aware of and even haunted by the legacy of disease, brings questions of morality and the plain and tragic facts of illness into sharp focus in “The Inheritance,” challenging European society to grapple with these taboos head-on. The painting is a truly dreadful one, supremely graceful in its execution, and a rare artifact of a time and place, of an epidemic of infection and fear. Previously on Body HorrorsPyromania! On Neurosyphilis and Fighting Fire with FireThe Magic Arrow: Penicillin & the Recurrin’ UrineResources

The Munch-museet in Oslo, Norway contains the largest collection of artwork of their native son.

To learn more about congenital syphilis in the 21st century, this is a great review on its dermatology and epidemiology. Reader beware: included are pictures of medical grade quality and these may be considered NSFW.