The inevitability of eugenics...as preventative health 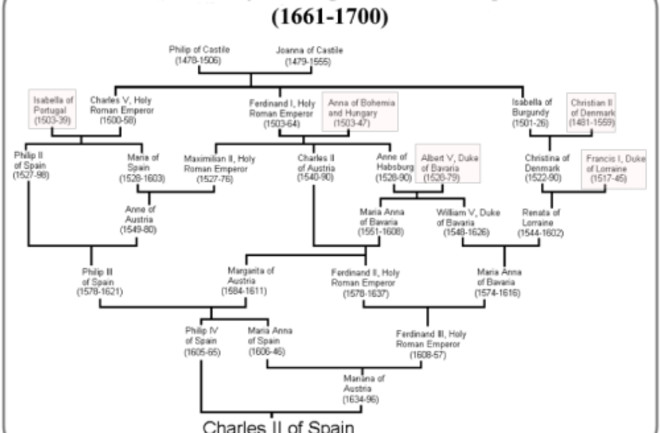 Inbred lineage. The Role of Inbreeding in the Extinction of a European Royal Dynasty, Alvarez et. al. Every now and then Richard Dawkins stirs controversy by bringing up the topic of eugenics. This is not surprising in terms of Dawkins' intellectual pedigree. The most influential British evolutionary biologist in the generation before Dawkins, R. A. Fisher, was a eugenicist. Arguably the most the most eminent evolutionist of Dawkins' own generation, W. D. Hamilton, clearly had eugenical sympathies, though he was keenly aware how unfashionable that had become.* University College London's Galton Laboratory still had the word eugenics in its title until 1965. More recently Dawkins has brought up the issue of consanguinity amongst the British Pakistani community. A practice which one might argue is non-eugenical due to the high rate of recessive diseases. First, let's define our terms. There is classical eugenics in the narrow and specific sense, whereby the long term trajectory of allele frequencies shift within the population as a function of their coding for positive traits. For example, if there was a law enacted in Britain that only individuals with blue eyes could reproduce because blue eyes was judged a positive trait, that would quickly change the allele frequencies within the British population. But today that is not the primary purview of eugenic methods. Rather, operationally eugenics encompasses practices which may maintain deleterious alleles within the population, or have no long term effect. In the first instance consider Tay-Sachs, screening for which means that selection against the allele via the generation of individuals expressing the recessive disease does not occur. In the second class one can bracket the various chromosomal abnormalities which lead to Down syndrome. These individuals are often infertile or have very low reproductive fitness. Because of its ubiquity it is the last case, prenatal screening for chromosomal abnormalities, followed by abortion in the case of a positive result, is the primary specter of eugenics today. But though these procedures may change the frequency of the trait in the population, there is no impact on inter-generational variations in allele frequencies. The classic anti-eugenic rhetoric, where eugenicists wish to create a better master race of some sort, falls flat substantively. The probability of having a Down syndrome child is a function of age, not one's "genetic quality" (at least primarily), so one is unlikely to discriminate against classes of people by ethnicity or class (in fact, the more educated are at greater risk because they tend to delay childbearing). One could argue that encouraging early storage of sperm by men to avoid excess mutational load in the germ line is also eugenical in intent. And to some extent I think it is arguably more eugenical in the classical sense, as one is presumably reducing the frequency of loss of function mutations. But I doubt anyone views the issue in such a manner. The goal is to produce offspring with lower risk of disease. The real fundamental issue here is that genes are at least somewhat in the picture, and genes are mystically powerful. But modern eugenics is really just part of the broader portfolio of preventative health. Since Neuroskeptic's post on the "new eugenics" a few years back there has been great advancement, such as noninvasive prenatal screening for chromosomal abnormalities. There has been moderate controversy, but in a world of routine in vitro fertilization and occasional surrogacy this does not rise to the level of alarm or salience. The primary point here is that the "new eugenics" is not going to be about a top-down agenda about remaking the genome of the human race and producing a lineage of Übermensch. It is going to come into being through a collective series of choices by couples and individuals in terms of what their vision is for a healthy and happy child. It will happen piecemeal, in banal and unnoticed steps. That outcome is not going to be uniform. Going back to some of the context of Richard Dawkin's debates about consanguinity in the British Pakistani context, genetics may be the problem, but genetics will also be the solution. Because of the persistence of parallel cousin marriage in Pakistani society there is some worry about pedigree collapse within these endogamous clans. Marriage between first cousins in an outbred population does increase the risk of recessive diseases, but repeated first cousin marriages within a lineage across generations compounds the problem. The ancient community of Samaritans in Israel has been facing this issue with two responses. One is to find brides outside of the community. In other words, change their cultural practices. But there is another option: genetic testing. Genetics may present problems, but it offers up solutions. And that is why I say eugenics, broadly understood, and seamlessly integrated into preventative medicine, is inevitable. There are more things in heaven and earth in modern genetic science than could ever have been dreamt of in Fancis Galton's original philosophy. * I am cautious about granting precedent to Fisher or Hamilton, as Haldane and Maynard Smith were both very accomplished thinkers in their own right. But I think if one has to pick that is the way one would have to rank them, though perhaps Hamilton and Maynard Smith are more equivalent (Haldane's interests were more diverse and variegated than Fisher's).