The history of evolutionary genetics

The first chapter of Evolutionary Genetics: Concepts & Case Studies gives a quick sketch of the arc of the field that the book covers via exposition of topical and current issues. Michael R. Dietrich focuses on the series of controversies which serve as "hinges of history." I have addressed the controversy between the biometricians & Mendelians before, below are the "highlights" over a longer period based on the outline constructed by Dietrich in his chapter, From Mendel to molecules: A brief history of evolutionary genetics. 1860sGenesis

Charles Darwin brings forth an evolutionary theory predicated on natural selection. He emphasizes heritable continuous variation within populations assuming a blending model of inheritance. Darwin's ideas are greeted with fury and adulation, and he becomes the world's most famous biologist. Gregor Mendel performs his experiments and formulates his discrete model of inheritance, elucidating the laws of independent assortment and segregation. Unlike Darwin Mendel's work is ignored and quickly consigned to the irrelevant bin. 1870s to 1890sForming of the ranks 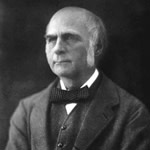 Francis Galton, Karl Pearson and W. F. R. Weldon forward the evolutionary model via natural selection in a formalized manner using statistical techniques such as correlation and regression. In the process not only do they delve into evolutionary biology, but they set the foundations for modern statistics (which R.A. Fisher, see below, would extent and build upon greatly). Other workers, like Thomas Huxley, and more marginal figures like Ernst Haeckel, accept the fact of evolution, but dissent from, or do not extend, Darwin's original insight in regards to process (e.g., natural selection upon continuous heritable variation). Though the Biometricians around Galton, Pearson and Weldon continue to carry the torch of Darwinian evolution, over time the idea that gradual selection on continuous variation could generate species or drive change was generally rejected by biologists. Before 1900 William Bateson began formulating his own theories which rejected the Biometrical school's emphasis on gradual evolution and analysis of extant variation in favor of a form of discontinuous saltationism (which, ironically, Galton himself was favorably predisposed toward). 1900 - 1920The Great War 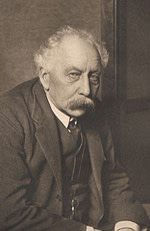 This is the period which I reviewed earlier this year, as two camps of biologists faced off, fortified by ego, arrogance and a stubborn constitution. In short, in 1900 Mendelianism was rediscovered simultaneously by multiple workers. Bateson became an enthusiastic Mendelian, as it was a plausible model for the discontinuous evolutionary processes he favored. Hugo De Vries and Thomas Morgan were two other prominent scientists who would make their mark as Mendelians. Against them stood Pearson, as Galton was aged and soon passed from the scene, as did Weldon. Within this period there was a period of defection as workers saw that experiments seemed to favor the validity of some form of Mendelianism, and an Eclipse of Darwnism ensued. But in the 1910s a new synthesis would emerge, as R.A. Fisher showed in The Correlation between Relatives on the Supposition of Mendelian Inheritance that Darwinian evolution and continuous traits emerged naturally from discrete Mendelian systems via polygenic systems. 1920-1940Darwnism Resurrected 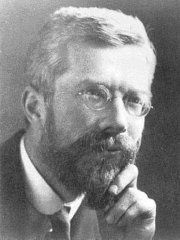 This period was the renaissance of Darwinism, as Mendelianism was absolutely absorbed into evolutionary biology, and the groundwork for the Neo-Darwinian Synthesis established. Central to the process was the work of three theoretical population geneticists, R.A. Fisher, Sewall Wright and J.B.S. Haldane. Though their specific methods differed these three workers used formal mathematical systems to elucidate the general principles of evolutionary theory via population genetic frameworks. Fisher emphasized the operation of selection upon large populations. Wright was pluralist, giving more room to stochastic processes, non-additive genetic variance and emphasizing the importance of population substructure, while Haldane tended to approach particular projects in an ad hoc fashion (e.g., genetic load, Haldane's Rule, etc.), though his general outlook lay somewhere between Fisher's and Wright's on most issues. The dispute between Fisher and Wright in regards to the salience of parameters like genetic drift and gene-gene interaction gave rise to the "Wright-Fisher Controversies," which continued for decades, and still echo down to the present in their heirs. While these three workers laid the theoretical groundwork, experimentalists like Theodosius Dobzhansky and E.B. Ford set out to test some of the models promulgated by the theoreticians. Ford was an acolyte of Fisher's who founded ecological genetics and showed the power of selection in natural populations. Dobzhansky focused on the fruit flie to illustrate the importance of population substructure and stochasticity. Naturalists like Ernst Mayr also joined the fray, while George Gaylord Simpson introduced a paleontological perspective. By 1940 these workers had cumulatively generated what would become the "Neo-Darwinian Synthesis," which would be set against macromutationist models like that of Richard Goldscmidt. 1940-1960Consolidation 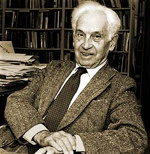 During this period workers like Dobhzansky, Mayr and Simpson were influential in crystallizing the gains of the synthesis. The early emphasis on stochasticity in Wright's model of the Shifting Balance transformed into a more nuanced system which focused on gene-gene interactions and rugged adaptive landscapes, as well as population substructure. Journals like Evolution were founded which promoted evolutionary biology as a separate and integrated discipline. In 1942 Julian Huxley published Evolution: the Modern Synthesis, encapsulating the general consensus in the field. Dobzhansky elucidated the difference between the "Balance" and "Classical" schools of evolutionary genetics, placing himself in the Balance School against Hermann Muller the Classicals (though one could argue that both were really proxies for the original ideas of Fisher and Wright). While the Balance School tended to favor maintenance of extant genetic variation in the form of heterozygosity (often via heterozygote advantage), the Classical School argued that homozygosity was the norm with polymorphism generally being an issue of observed transience (i.e., an allele is going to fixation, or is being swept to extinction). The extent of polymorphism found practical application in trying to understand the effect of radiation during the nuclear age. 1960-1980The Second War

The discovery of the molecular clock, coalescence and the twopapers on allozyme polymorphism by Richard Lewontin and J.L. Hubby broke the Wright-Fisher/Balance-Classical duopoly. Neutral Theory, promoted by Motoo Kimura, leapt in to fill the breach, arguing that the high levels of polymorphism, and the existence of a molecular clock, are evidence for widespread selective neutrality on the molecular level. In other words, transient polymorphism is very common, while overdominance in the Balance School sense is not. A "Selectionist vs. Neutralist" debate ensues which goes nowhere, but by 1980 Neutrality is held to be a reasonable "Null Hypothesis," and the relevance of selection and neutral processes seem to be important dependent on context for those not wedded to grand narratives. While the population genetic basis of evolutionary biology was diversified by the molecular dimension, Stephen Jay Gould and Lewontin attacked the "Panglossian Adaptionism" of some thinkers (e.g., Ernst Mayer). Simultaneously, a very ambitious form of social evolutionary theory was formulated by W. D. Hamilton, straight out of the Fisherian adaptationist tradition. 1980-2000DNA comes to town 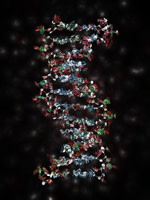 Molecular evolution comes to town. PCR makes DNA sequencing far more viable. Computers are powerful enough to handle to the new stream of data. Instead of theoretical genes DNA sequencing allows scientists to conceive of the total discrete/digital nature of genetical inheritance. Instead of snapshots of a specific gene, the idea of digesting whole genomes becomes viable. Controversies bloom like a thousand flowers as theory and data mix in an orgy of activity. The focus on sequencing shifts the limelight back to humans, as medical rationales drive genome sequencing projects. Microarray technology allows fine tuned gene expression assays. "Now I am become death, the destroyer of [theoretical] worlds"