The Heroine of the FDA

One woman was all that stood between thalidomide and America. 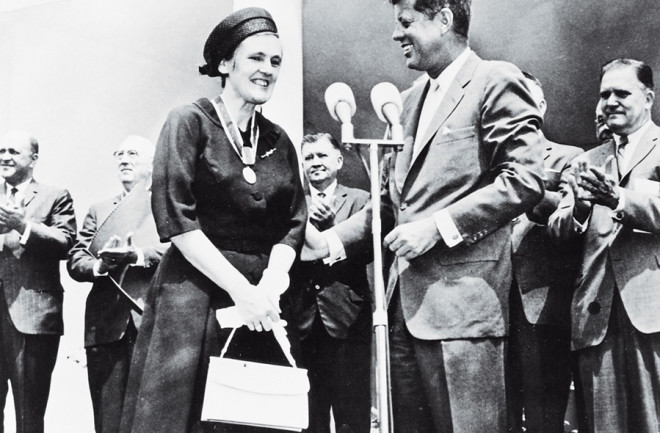 The president was beaming. The woman beside him — a brunette wearing proper gloves and hat — also smiled, shyly. She was tall, her dark hair lightly streaked with gray. This was the hero who saved the United States from the tragedy of thalidomide, a drug often prescribed to pregnant women that could result in serious birth defects such as short, flipper-like arms and legs. The year was 1962, and in a ceremony in the White House Rose Garden, Frances Oldham Kelsey had just received the President’s Award for Distinguished Federal Civilian Service from John F. Kennedy.

But Kelsey’s body of work goes well beyond thalidomide. Scientists still benefit from changes she and her colleagues set in motion. Countries communicate more efficiently about common medical problems thanks to her, and researchers know that drugs — and viruses — that appear to have little or no side-effects on pregnant women can be devastating to their developing babies. Her importance in medical history can’t be overstated.

Frances Oldham was born on Vancouver Island, Canada, in 1914. The daughter of a retired British army officer, “Frankie” went to schools in both Canada and England. Her interest was in the sciences — first biology, then biochemistry and finally pharmacology, the study of how chemicals act on the human body. She received bachelor’s and master’s degrees from McGill University in Montreal. At her mentor’s suggestion, she applied to the new pharmacology department at the University of Chicago.

“Dear Mr. Oldham,” began the letter offering her a position, assuming that this “Frances” was a man. “Perhaps I should set him straight,” she said, according to her Autobiographical Reflections. “Don’t be ridiculous,” said her McGill adviser. “Accept the job, sign your name, put Miss in brackets afterwards, and go!”

Oldham earned her Ph.D. in pharmacology in 1938, and five years later she married Fremont Ellis Kelsey, with whom she worked on the massive World War II project to find a substitute for quinine to fight malaria. Now Frances Kelsey, she next enrolled in the University of Chicago medical school solely for the extra credentials. “As a woman, I needed the extra credentials. Let’s face it, I needed all the help I could get to obtain a job,” she wrote in her autobiography. Upon graduation, she was hired as an editorial assistant at the Journal of the American Medical Association (JAMA), verifying the scientific accuracy of submitted papers.

A kindergarten student in Great Britain born with short limbs, a birth defect from the drug, uses a pencil-holding device to learn to write.Leonard Mccombe/The LIFE Picture Collection/Getty Images

In 1952, when her husband became head of the pharmacology department at the University of South Dakota, the family (which now included two young daughters) moved to the small college town of Vermillion in the southeast corner of the state. Kelsey continued her research and commuted by overnight train to Chicago to study the new field of nuclear medicine.

Kelsey’s wide-ranging experience in the 1930s, ’40s and ’50s would serve her well in the 1960s to recognize the threat of thalidomide. From her pharmacology work, she knew the importance of animal studies and of carefully scrutinizing new drugs. From the anti-malaria studies, Kelsey saw that mothers and their unborn babies did not necessarily react the same way to drugs. And from her JAMA work, she had learned the names and practices of doctors who kept appearing on less-than-scientifically robust articles.

When she landed a job as a medical officer at the Food and Drug Administration, she was uniquely prepared. The Kelseys were ready to leave small-town life and return to the big city, so when Fremont Kelsey also received a job offer in Washington (from the National Institutes of Health), they made the move.

Kelsey had been at the FDA only a month when a fateful application in four thick volumes landed on her desk in September 1960. The William S. Merrell Co. of Cincinnati was requesting approval to sell a German-developed drug on the American market under the trade name Kevadon. Generically known as thalidomide, it was a mild sedative often prescribed for pregnant women with morning sickness, and it was already available in some two dozen other countries.

As was FDA procedure, a three-person team studied the thalidomide application: a chemist, a pharmacologist and a medical officer, in this case Kelsey. If no one filed any objections within 60 days, the drug would receive automatic approval.

The drug, marketed as Distaval in the U.K., was prescribed for pregnant women with morning sickness.Science and Society Picture Library/Getty Images

Each of the team members found problems. The chemist found mistakes in the translation of the original German documents. The pharmacologist felt the animal studies submitted were not a good indication of possible toxicity in humans, since animals absorb thalidomide poorly. Kelsey, in the medical area, determined the submitted clinical studies were incomplete and, therefore, the drug’s claims were not adequately supported. Many of the submissions from doctors (she recognized a few of the names from questionable JAMA papers) read more like advertising testimonials than well-designed, well-executed scientific studies.

While awaiting Merrell’s response in early 1961, Kelsey read a letter in the British Medical Journal mentioning a possible side effect of thalidomide: peripheral neuritis, a painful tingling in the arms and feet. Merrell had never mentioned it — the company later claimed it didn’t know. Immediately, Kelsey wrote to Merrell asking for more information and additional proof of safety.

As the approval time stretched into more than a year, Merrell’s representatives grew increasingly impatient, complaining to Kelsey’s superiors and relentlessly badgering her by phone and memos to urge approval. Merrell even called Kelsey’s complaints “slightly libelous.” (Today, this sort of continual contact with FDA reviewers is discouraged.)

Meanwhile, reports of startling birth defects in babies born to mothers who had taken thalidomide were surfacing in Germany, Australia and other countries where the drug was legal — including Kelsey’s native Canada. It was the beginning of the end. By November 1961, thalidomide was taken off the market in Germany, and other countries soon followed. Four months later, Merrell withdrew its application from the FDA.

At the FDA, Kelsey determined that thalidomide studies were incomplete and did not support the maker’s claims.Art Rickerby/The LIFE Picture Collection/Getty Images

Even though Kelsey and her team kept thalidomide off the American shelves, many doctors had dispensed “investigative samples” of the drug. Because of this, and because some mothers had obtained the drug overseas, the U.S. saw an estimated 17 births of deformed babies. Still, compared with the numbers worldwide — more than 10,000 children in 46 countries — it’s clear that what FDA historian John Swann calls Kelsey’s “persistence and grit” averted a disaster.

A Job Well Done Elsewhere in Washington, Tennessee Sen. Estes Kefauver had been holding intermittent hearings for more than two years, originally on drug pricing and marketing, but expanded into drug safety. In July 1962, a detailed story about America’s close call with thalidomide appeared on the front page of The Washington Post, under the headline “Heroine of FDA Keeps Bad Drug Off Market,” with a photo of Kelsey. (Supposedly, the story had been leaked to the Post by a Kefauver commission staffer, with the senator’s encouragement.)

The Rose Garden award ceremony for Kelsey followed in August, and an omnibus bill tightening regulations on the pharmaceutical industry and drug trials passed the Senate two weeks later. After reconciliation with a similar House bill sponsored by Rep. Oren Harris of Arkansas, President Kennedy signed the Kefauver-Harris Drug Amendments bill into law in October 1962. Standing in the half-circle of invited officials looking on was Frances Kelsey.

The Kefauver-Harris bill “changed the face of drug regulation,” says Swann, who knew Kelsey. Companies now had to prove drugs were effective as well as safe, based on rigorous, well-controlled studies by qualified researchers. Further, the FDA would establish (and monitor) good manufacturing practices, and control of prescription drug advertising would be transferred from the Federal Trade Commission to the FDA.

Later in 1962, Kelsey was named head of the FDA’s new investigational drug branch. For the next 43 years, she stayed at the FDA. On Aug. 6, 2015, Frances Oldham Kelsey, now frail, white-haired and living with a daughter in southern Ontario, was visited by the lieutenant governor of Ontario, who presented her with the Order of Canada medallion. The next day she died, at the age of 101.