The Health Toll of Living in Small Apartments

Living spaces are shrinking, and we're feeling the squeeze. But research shows we can trick our brains into liking micro-apartments and other small arrangements. 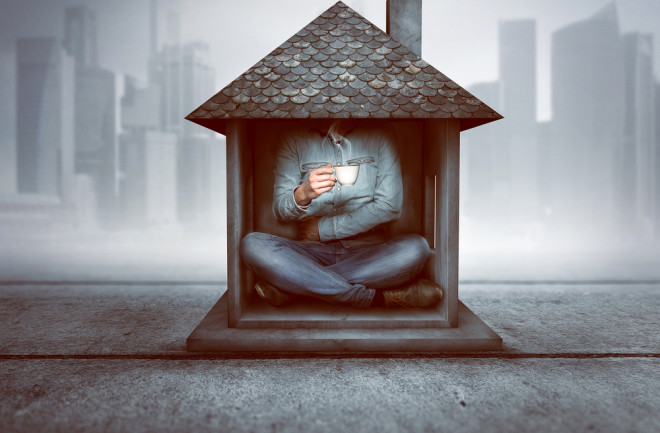 Swiss psychiatrist Carl Jung viewed the home as a reflection of one’s psyche. If that's true, then people who opt for trendy micro-apartments — which can come as small as 220 square feet — clearly reject both mental and physical clutter.

Unlike the crowded living spaces that low-income families have increasingly occupied out of necessity, micro-apartments carry relatively high price tags for special features like co-working spaces, sleek storage and even beds that disappear into the ceiling. It’s ultimately an ideal choice for white-collar employees in pricey cities, rather than a truly equitable housing option.

These snug dwellings typically measure under 500 square feet, though unit size depends on a given city’s regulations (San Francisco, for example, lowered its minimum living space size down to 150 square feet in 2012). Despite the fancy features, tiny units could pose similar health risks to other cramped homes — particularly as the COVID-19 pandemic continues to keep many of us indoors.

But we don’t have to feel cooped up: Feeling comfortable is subjective and not necessarily based on a property’s actual size.

“Crowding is a perception of either too little space or too many people in a space,” says Kim Rollings, an architect and environmental psychologist at the University of Notre Dame who has researched how design and architecture influence people’s well-being. “It’s possible, depending on how [a home is] designed or set up, to satisfy someone’s needs.”

Residents’ needs will, of course, differ based on their social arrangements. For example, micro-living families may require some sort of physical divider for their children’s privacy because the units commonly have a single-room layout. Research has shown that depression, loneliness, elevated blood pressure and lower academic performance can be found among children who live in crowded homes.

These impacts arise from a lack of personal space and the inability to escape distractions, Rollings says, which causes children to feel helpless and withdraw from others — habits that can follow them outside of the home and into adulthood. Parents, meanwhile, can feel stressed, lose sleep and act less responsively to their children.

And while low-income families more commonly live in confined conditions, particularly immigrants, some studies have isolated these outcomes from socioeconomic status. But wealthier families may be more equipped to take on academic challenges and have fewer stressors compounding their crowding anxiety, Rollings says. When it comes to elevated infectious disease transmission within crowded households, however, income might play a larger role.

Close quarters can also test young couples and solitary dwellers, who are more likely candidates for micro-apartments. While the findings are mixed, cabin fever can elicit psychological distress, substance abuse and depression in adults. Such stress risks incidents of aggression and domestic violence.

Some researchers have claimed that some cultures have a higher tolerance for residential crowding, though others argue that the mental burden is universal. “If a space isn’t affording us what we need it to, there’s going to be some sort of adaptation, for better or for worse,” says Lindsay T. Graham, a research specialist at the University of California, Berkeley Center for the Built Environment who has studied people’s psychological relationships with their homes.

Making the Most of a Scaled-Down Setup

Even in a small apartment, it’s possible to create a functional environment that minimizes our perceptions of crowding. It’s been well established that a window with a view of green space can make rooms feel larger and improve our mental health — a finding further proved during Tokyo’s COVID-19 isolation, where a study published November 2020 found that peeks outside helped mitigate people's pandemic-triggered distress.

High ceilings also give the illusion of a large abode with more personal space. They’re standard in the renovated micro-apartments within lofty buildings generally constructed prior to World War II, but not always guaranteed in new constructions.

Floor plans matter, too, as evident with the backlash against open offices. Ever wonder why your open-plan office made you feel cranky? Experiments with incarcerated people and college students have pointed to the benefits of increased architectural depth, or a higher number of physical divisions present in a living space (like cubicles and walls). These allow us to control how and when we socialize, reducing the strain of forced interactions. If you can’t add an entire wall to your micro-apartment, room dividers could still do the trick.

While the broader design aspects may be out of your hands, small details can make a room feel like your own. Simple steps like adding plants and posters may even benefit academic and job performance. Decorations can help us maintain a sense of agency as our homes continue to function as schools, offices and everything in between.

High-Density Digs in a Post-Pandemic World

As the pandemic drags on, it’s unclear whether micro-apartments are worth it, given the reduced opportunities outside our four walls. A building’s communal spaces tend to be less attractive amid rampant infectious disease spread, after all.

But living in a tight-knit community may actually benefit us during public health emergencies  — and it’s still unclear how density affects transmission and mortality rates, versus the more probable factors of income and education level.

Some real estate experts predict that a significant number of higher-income city residents will increasingly ditch confined apartments for the roomy suburbs (or even Airbnb-hopping), but it’s probably too soon to tell. For now, it’s necessary to prepare compact living spaces, especially the homes of working-class residents, for the next major challenge.

“There’s a need to increase the resiliency of our spaces and the ways in which we mindfully operate within them ... to support us when these big, dramatic events happen,” Graham says.