The Grim Origins of 'Gluten-Free'

It took an act of war for doctors to learn how to treat celiac disease. 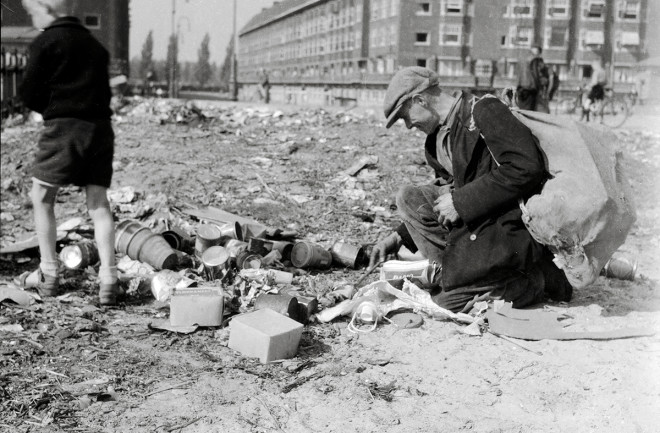 During the 1944-45 "Hunger Winter," a man searches for fuel and food at an illegal rubbish dump in Amsterdam-Zuid. (Credit: Cas Oorthuys/Nederlands Fotomuseum)

The term “gluten-free” seems to be everywhere these days: food labels, restaurant menus, cookbooks, even water bottles. While it’s become trendy to avoid gluten — a protein found in popular foodstuffs like bread and pasta — humans have safely and enthusiastically consumed it for thousands of years. Food containing gluten remains a staple of the human diet around the world, providing sustenance to billions.

So why this apparent backlash against gluten?

While the protein is a vital part of the human diet, for some people, it really is unsafe. The path to this seemingly simple discovery was long and tortuous, dating back to a particularly bleak period of World War II.

Holland was suffering in the winter of 1944-45. The country was under siege, and the Nazis had cut off vital supplies. Starvation was rampant. The combination of extreme cold and famine came to be known as the Hongerwinter, Dutch for “Hunger Winter.”

“It was an act of war, Nazi retaliation after a railroad strike by Dutch workers,” says Anne van Arragon, co-editor of The Hunger Winter: The Dutch in Wartime, Survivors Remember. “Grocery stores were empty, and soup kitchens served only a thin, watery soup. Those who still had some physical strength traveled a hundred miles or more to rural areas, mostly on foot, to beg or barter for food.”

Yet out of this horror came a medical breakthrough, one that still reverberates around the world today and helps millions of people every year: the treatment for celiac disease.

Celiac disease — also known as celiac sprue, or sometimes simply sprue — is a chronic autoimmune disease that affects the small intestine, the main organ that absorbs food into the body. People with classic celiac disease can’t digest the gluten found in wheat and other grains. Untreated, this intolerance can interfere with overall digestion, leading to severe diarrhea, malnutrition, weight loss and, eventually, death.

People with celiac disease can literally starve to death in the presence of food. Their reaction to gluten blocks absorption of what nutrients they can safely consume.

Celiac disease, which is hereditary and can develop any time after a person starts eating gluten-containing foods, has been around for thousands of years. The Greek physician Aretaeus of Cappadocia wrote the first account of the disease around the first century A.D. He described patients whose food passed through them without being digested, calling the disease the coeliac diathesis, stemming from the Greek word koalia, meaning abdomen. For centuries afterward, the diagnosis served as a death sentence, as no one knew the cause or any treatment.

Physicians did recognize that some patients improved, and could even gain weight, when consuming highly modified diets. Experimental nutritional regimens based on eating mainly rice, mussels or bananas achieved varying degrees of success. Still, these diets were unappetizing at best, and most people couldn’t maintain them over time.

It would take the wartime famine to provide the final clue for how doctors could help patients with celiac disease.

Dutch pediatrician Willem-Karel Dicke had a long-standing interest in celiac disease, and in the 1930s he encountered patients who told him their symptoms worsened after eating bread or biscuits. He suspected something related to bread was the cause of the disease.

Then, when the Hunger Winter came in 1944, Dicke saw its effects firsthand. People in the western Netherlands had to subsist on just 500 to 1,000 calories each day, and sometimes even less. The famine was severe; more than 4 million people went hungry, and between 20,000 and 30,000 died.

"No bread was to be had in the cities, with the rare exception of black marketeers offering a barely edible product at extortionate prices,” says van Arragon. “It wasn’t a wheat shortage so much as an absence of wheat.”

But at the same time, Dicke realized, children with celiac disease were seeing improvement in their symptoms; some even gained weight. It made him curious.

After the famine ended along with the war in May 1945, food supplies from the Allies, including wheat and bread, flooded back into the Netherlands. That’s when Dicke made a critical observation: Celiac patients had a clear and rapid relapse.

The connection was enough to get Dicke to rigorously investigate the relationship between diet and celiac symptoms. Over the next roughly five years, and through experiments with wheat-free diets, Dicke determined that avoiding foods with wheat and related grains reduced diarrhea and allowed for weight gain in people with celiac disease. They usually felt better, too.

Scientists working together “determined that gliadin, a protein fraction of wheat, rye and barley gluten, was the trigger of bowel inflammation in celiac disease,” says Carol Semrad, a physician and celiac disease expert at the University of Chicago School of Medicine. “These findings led to the modern treatment of celiac disease, a gluten-free diet. . . . On a strict gluten-free diet, most individuals with celiac disease have complete bowel recovery.”

Over 70 years later, Dicke’s discovery remains the cornerstone of celiac disease treatment. But questions about the treatment linger.

“Although the gluten-free diet is highly effective,” says Semrad, “gluten is present in most foods in a Western diet — breads, pasta, pizza, desserts, processed foods — making it difficult to follow.” It’s also hard for food manufacturers to maintain completely gluten-free conditions, as even residual amounts of gluten used in the production of normal foods can contaminate gluten-free foods.

That’s why research into novel treatments for celiac disease is underway. “New therapies under study include oral enzymes to fully digest gluten in the diet . . . and a vaccine to promote tolerance to gluten,” says Semrad. If successful, people with celiac disease finally may be able to eat what everyone else gets to enjoy.

On the other hand, many of those without the disease choose to eat gluten-free foods, or even try to adhere to a gluten-free diet. It’s unclear how helpful this is to people without celiac disease. As long as a balanced diet is maintained, though, going gluten free won’t cause any harm, and some people do feel better. These folks may have “non-celiac gluten sensitivity,” and researchers are working to learn more about this condition, including whether gluten is the true cause.

Celiac disease has gone from being a lethal enigma to a bona fide medical success story. Since WWII, we have learned a tremendous amount about it, based on decades of research by thousands of individuals. But we owe a special debt to a curious Dutch pediatrician who kept his eyes open and made good clinical observations, even under the worst of circumstances.

Douglas G. Adler is a professor of medicine at the University of Utah School of Medicine in Salt Lake City.