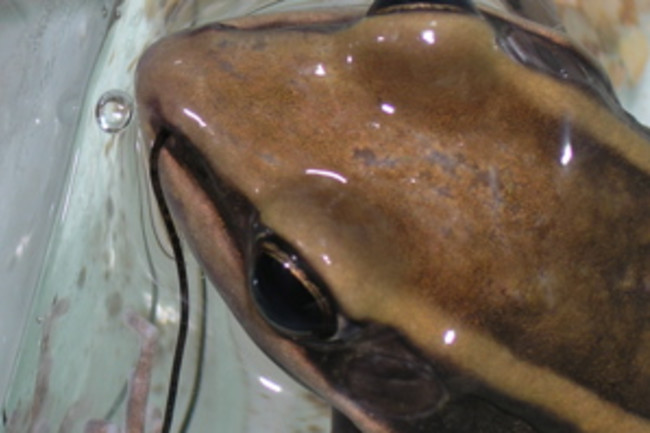 At the Loom we believe that the path to wisdom runs through the Land of Gross. We do not show you pictures of worms crawling out of frog noses merely to ruin your lunch. We do not urge you to check out these freaky videos of worms crawling out of frog mouths and fish gills merely to give you something to talk about at the high school cafeteria table tomorrow (Dude, you totally will not believe what I saw...) These images have something profound to say. The worm in question is the gordian worm or horsehair worm, Paragordius tricuspidatus. It has become famous in recent months for its powers of manipulation. The gordian worm lives as an adult in the water, where they form orgiastic knots. They lay eggs at the edge of the water, which can only mature if they're ingested by insects such as crickets. The worms feed on the inner juices of the crickets until they fill up the entire body cavity. In order to get back to the water, the gordian worms cause their hosts hurl themselves into ponds or streams. As the insects die, the worms slither out to find the nearest mating knot. Gordian worms are not unique in their ability to manipulate hosts (see Parasite Rex for a heap of similar examples). But a paper in the current issue of Nature puts a very cool twist on the classic strategy of parasite mind control. It's all very clever to send your insect host diving into the water, but there's one very big flaw: it takes several minutes for the gordian worm to escape its host. The hapless host spends that time twitching and flailing in the water. In other words, it makes itself a perfect target for various predators. A Gordian worm that ends up as a frog's lunch is a bit too clever for its own good. French scientists have discovered that the gordian worm does not face certain death when its host gets eaten. They put infected crickets in front of frogs, bass, perch, and trout and watched what happened when the predator attacked its parasite-carrying prey. They watched 477 attacks. In many cases, the worm became part of the predator's meal. But in a sizeable minority of case--18% for trout, 22% for perch, 26% for bass, and 35% for frogs--the worms escaped. After 8.6 minutes on average, the worm slipped out of the mouth or nose of the frogs, or the mouth or gills of the fish. In one particularly close shave, it took a worm 28 minutes to escape, as its predator repeatedly tried to swallow it again. This past week has seen much discussion about how evolution struggles through seemingly impossible transitions--from fish walking toward land to receptors latching onto new hormones. I think the gordian worm earns a place in this hall of fame. One of the most remarkable features of the parasitic world is the multi-host life cycle. Toxoplasma shuttled between cats and rats and other prey. Blood flukes reside in snails before infecting humans and causing schistosomiasis. Mosquitoes spread malaria to humans. In some cases, a parasite may have to live in three or four hosts before reaching maturity. In their own creepy way, these life cycles pose an exciting challenge to biologists. How could they have evolved? These parasites must live in all their hosts in order to complete their life cycles. A tapeworm in a flour beetle must get into a bird to mature; otherwise it has reached an evolutionary dead end. It can be hard to conceive of how a complex life cycle could have evolved from a simpler one. If a parasite was adapted to live in a single host, finding itself accidentally inside another host ought to spell certain death. The gordian worm shows why this is not so. Ending up in a frog or a fish is indeed fatal to most gordian worms. Like their hosts, they get digested in the acids of the predator's stomach. But some gordian worms can survive. If they carry genes that help their chances of survival, natural selection may favor them. Ending up in an alien host is not always a dead end. Given enough time and enough evolution, it may even became an essential part of a parasite's life cycle. Hey...do I see something moving in your nose...?