The girls are all right, they accept human evolution

One of the trends that makes me less pessimistic about the inevitability of an idiocratic end-point to technological civilization is that it seems young Americans are more likely to accept evolution than earlier age cohorts. The EVOLVED variable asks whether one believes that "Human beings, as we know them today, developed from earlier species of animal." It was asked in 2004 and 2008, and its response is dichotomous between true and false. The favorable age trend I was aware of, but almost randomly I decided to control for some demographic variables, and I stumbled onto something which surprised me a bit, but in hindsight shouldn't have: much of the greater acceptance of evolution among the youth has to do with a closing of the sex gap between men and women. Traditionally women have been more religious and Creationist in their inclinations, but far less so in Gen Y. Chart below of EVOLVED. 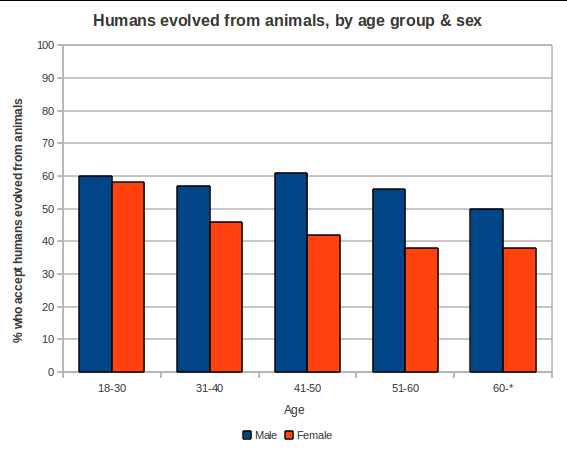 The convergence between men and women here seems to mirror what is occurring with religion more generally. Young men aren't getting that much more secular, but women are, resulting in an aggregate of serious secularization. Here are the percentages for 2004 and later in relation to attitudes toward the bible. 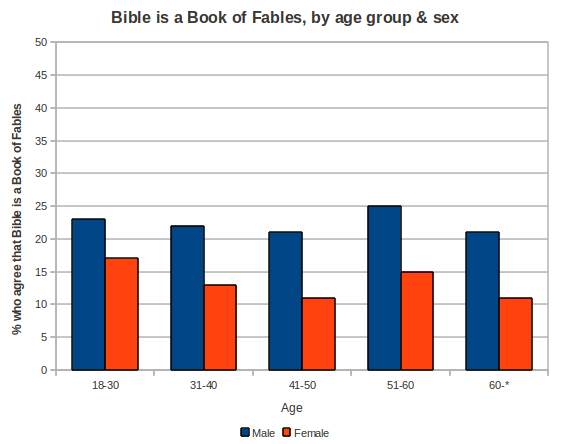 So some, but not all, of the closing of the "evolution gap" across sexes can be attributed to decreased belief in the core precepts of organized religion (e.g., the revealed nature of scripture). Rather, if you constrain the beliefs about evolution to those who believe that that the Bible is the inspired Word of God, you see that women are converging with men in the proportion who are theistic evolutionists, and turning away from Creationism. Among these believers, for those who were 61 or older 42% of women accepted evolution vs. 56% of men. For those in the age bracket 18-30 the proportion was 65% for both sexes.