The Girl With The Fiery Eye

A 20-something's trek through Europe followed by a bad sore throat and inflammation add up to a rare twist on a common infectious disease. 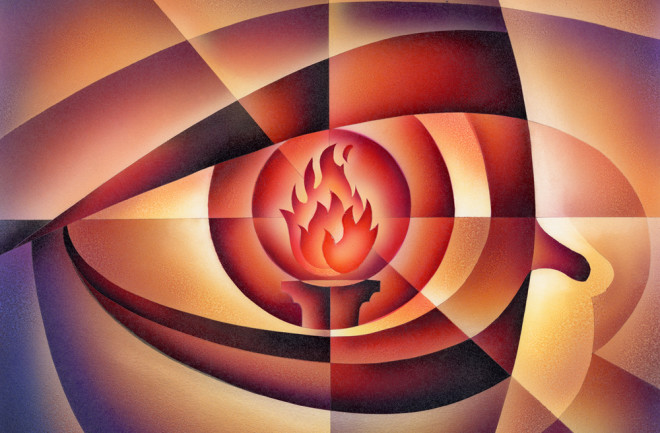 Kara was leggy and tan, with a long, tawny mane. Her smile was as warm as the summer sun. But, oh, her right eye! Where it should have shone snowy white, my patient’s sclera — the tough, fibrous coating near her iris — glowed neon red.

Plus, something else about Kara’s appearance was not quite right. Despite her slim limbs, her face was puffy and round.

To anyone trained in medicine, the evidence spoke for itself. While battling her angry eye, the 28-year-old fashion designer had downed lots of prednisone. Now her body showed telltale signs of the heavy-duty steroids, including a “moon face,” a layer of fat over the back of her neck, and elevated blood pressure. No matter how they might be helping her, they were also taking a toll. To top it off, her eye still throbbed.

Nonetheless, Kara hadn’t spent two hours on crowded Southern California freeways to bemoan her looks or pain. She scheduled our visit because my longtime colleague — a noted ophthalmologist — was concerned about Kara’s side effects.

More importantly, he was worried that the real diagnosis was missed.

To doctors in my field, a challenge like this is pure Agatha Christie catnip.

A few days earlier, his email had summarized the problem. “Kara’s got a bad case of scleritis,” it began, “that’s being treated as an autoimmune disease. The trouble is, her rheumatoid tests are negative, and her symptoms started after traveling. I know Western Europe isn’t exactly exotic, but when Kara mentioned river rafting, rustic hikes and insect bites, I figured she’d better see an infectious diseases specialist.”

To doctors in my field, a challenge like this is pure Agatha Christie catnip. Hence my next step — now that I was cast as Hercule Poirot — was to exercise my “little grey cells.”

Clinical experience helped. Step one, after mulling over my colleague’s email, was to recall another dozen-plus patients I had seen throughout my career. The infections that triggered their chronic eye inflammation ranged from tuberculosis and syphilis to inhaled fungal blights like valley fever.

On the other hand, what were the odds that Kara had one of these perps? Not very high, I had to admit. How about a sneak attack by Brucella or Salmonella lurking in unpasteurized cheese or undercooked meat as the spark that incited her orbital inferno? Or maybe, I pondered, I should search out a vector-borne culprit. Between April and October, Europe’s high Alpine forests harbor tick-borne encephalitis, while chikungunya — a mosquito-borne virus originally from Africa — had surfaced in northeastern Italy.

Finally, there was leptospirosis, an infection that rats, dogs and other animals sometimes spread by urinating in or near freshwater lakes and streams. Humans who acquire the coiled Leptospira bacteria by inhalation or direct contact with contaminated water suffer diverse immunologic ills.

Oh, heck. I was clutching at straws and I knew it. More history equals more clues, I decided. I clearly needed more history.

“So tell me about last summer,” I said, after commiserating over her freeway trek. “Were you by yourself? Where did you go? What did you do?”

As Kara filled in the details, I scribbled notes. No, she said, she did not travel solo. For three weeks, she toured Europe with her best friend and a gang of fellow adventurers. In rustic corners of Italy, Austria and the Rhine Valley, they hiked, whitewater rafted, lingered over wine by buggy lakes, even fed farm animals.

As for illness? “We all had colds at one point,” Kara recalled. “You know — drippy nose, congestion, cough.” She paused, considering the timeline. “But it wasn’t until the day we flew home that my roommate and I both came down with terrible sore throats and swollen glands.”

“Well, my friend saw her regular doctor and took antibiotics. But when I went to an urgent care clinic, my throat swab was negative, and I got better on my own. Until a week later, that is. That’s when I developed a high fever and a spotty rash. Then my fever broke, my rash faded, and I was fine for another week until my joints began to ache and my knee swelled up.”

“Finally,” Kara concluded, “my right eye turned red, and it’s been red ever since. Shall I send you photos?” she added helpfully.

Numbly, I nodded. Of course I wanted to see her gallery of pics. But I was still distracted by a thought I couldn’t shake.

“So now it’s been six months … and you’ve never taken a single antibiotic?”

Numbly, I nodded. Of course I wanted to see her gallery of pics. But I was still distracted by a thought I couldn't shake.

I suppose it sounds odd in this era of antibiotic backlash, but some clinical situations call for antibiotics even if you’re treating blind. So, yes, I quickly decided: I would exclude all the oddball diagnoses on my laundry list of culprits. But now my leading suspect was Group A Streptococcus, that most common — treatable — sore-throat germ of children and adults.

Even if Kara had tested negative at a storefront clinic six months earlier, Group A strep is so infamous for causing secondary inflammation in joints, heart valves and other tissues and organs, it would be folly not to look for it again.

I also vowed — as soon as our lab had Kara’s serum safely in hand — to start my new patient on antibiotics. Six months into her ordeal, I still hoped they might cool her eye and reduce her long-term dependence on steroids and other immunosuppressives.

And that’s pretty much how it worked out. Kara eventually took two different antibiotics, and although her throat culture remained negative, antibody tests later proved she had recently been infected with Group A strep. Moreover, her antibiotics worked like magic. A month into treatment, her ophthalmologist wrote again, but this time with an upbeat message. “When I saw Kara, her scleritis was markedly better. She still has some large, dilated vessels … but that’s often seen after a prolonged episode of scleritis. The eye is no longer painful or tender.”

He had also delved into the medical literature and found a case report from France describing a patient who was remarkably similar to Kara. This middle-aged woman also suffered scleritis after a bad throat infection with Group A strep. And, just like Kara, her eye problems disappeared after treatment with steroids and penicillin.

“What happened to Kara’s face?” you may be wondering. Slowly but surely, after she tapered down to a tiny dose of prednisone, it regained its normal contours. Kara no longer resembles a chipmunk whose cheeks are stuffed with nuts and seeds, and her blood pressure is back to normal. Not long ago, she even passed her vision test at the Department of Motor Vehicles. Finally, on repeat testing, her antibodies to Group A strep were way down.

“I’m so happy I look like myself again!” Kara confided over the phone four months after our first meeting. “In a few weeks, I’m going to be a bridesmaid in my cousin’s wedding.”

Kara’s not totally out of the woods, of course. She’s still being closely monitored. She’s also remaining, for the time being, on a weekly non-steroidal, anti-inflammatory injection. Considering what she’s been through, her doctors all agree: We need to thoroughly douse the last, smoldering embers of her ocular fire.