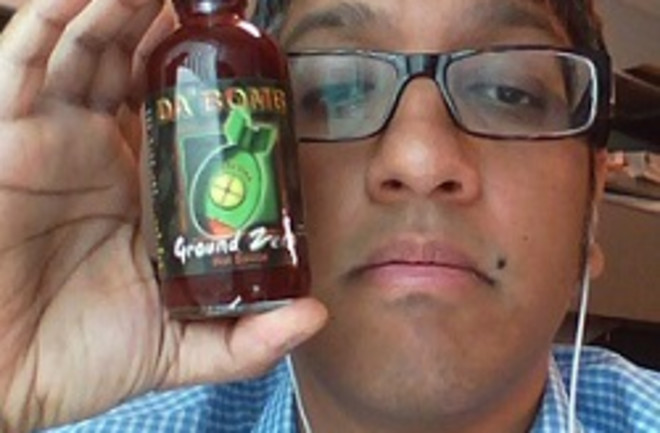 300,000 Scoville unitsRecently I tried four of the Da Bomb

hot sauces. I was prompted by a story in The Los Angeles Times about a student who got in serious trouble for putting Da Bomb: The Final Answer into the marinara at a cafeteria. Coming in a >1 million Scoville units I can see why this is a serious offense. But Da Bomb

features other lines as well. Here are the four I tried out recently with some friends: - Da Bomb Ghost Pepper. This is a relatively mild sauce, and is more notable to me for its saltiness than anything else. The label says ~30,000 Scoville units, and that seems about right. - Da Bomb Beyond Insanity. At 100,000 Scoville units it's taking it to the next level. I can't really say there's much distinctive for me about this sauce. It sufficed in terms of the spice, but it wasn't exceptional in either that or flavor. - Da Bomb Ground Zero. Definitely not the least. At 300,000 Scoville units this will test a hardened pepper hound, but, it's not physically dangerous. The taste isn't as artificial and metallic to me as the Dave's Insanity line. This is the closest in terms of utils to fresh habanero. - Finally, Da Bomb: The Final Answer. I enjoyed this...but this sauce is a serious hazard. To be safe and comfortable you should handle it with disposable gloves, and store it somewhere that the unsuspecting won't be able to stumble upon. In the end I have to go with Ground Zero because it's not a pain in the ass. The Final Answer is really just a "stunt sauce' in terms of usage as a condiment. Of course it would still be useful for cooking, but then I have to ask why you just don't go with a pure capsaicin extract of some sort.