The first, second, and third nations 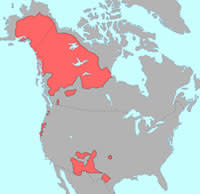 By now you've probably read about the paper which reports that there seem to have been three waves of humans migrating into the New World prior to the arrival of Europeans. A major aspect of this result is that it does not emerge out of a vacuum, but rather comes close to settling an old question in linguistics. The late Joseph Greenberg generated a series of audacious phylogenies of languages of the world. Greenberg's attempts received mixed reviews. It seems that there is little controversy about some of his classifications of African languages, but linguists of American native dialects rejected his division of the languages of the New World into three broad families, Eskimo-Aleut, Na-Dene, and Amerind. Eskimo-Aleut is rather self-evident. Na-Dene encompasses a group of languages in northwest North America, along with some significant outliers such as Navajo. Amerind seems to roughly be a grab-bag of everything else. The linguistic trichotomy also lent itself to a narrative of three migrations. L. L. Cavalli-Sforza gave his support to Greenberg's framework in The History and Geography of Human Genes, and it seems most non-linguists are particularly congenial toward his tendency of 'lumping.' In contrast, linguists remain more skeptical 'splitters,' at lease those who have a more ethnographic disciplinary bent. Geneticists have not always supported Greenberg's suppositions. For example, many of the members of the same group which authored this paper implicitly put the kibosh on the attempt to construct a unified linguistic family which spanned the Andaman Islanders and the Papuans. 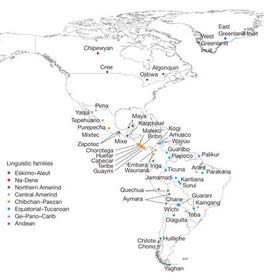 The method of the paper was relatively straightforward, assuming you are already somewhat familiar with the statistical genetic esoterica which was unveiled a few years ago by this group and others. Basically you take genetic data in the form of hundreds of thousands of SNPs, and you test the patterns of variation in that data across populations against explicit models of demographic history, represented visually by phylogenetic trees. You can see here that the sampling was relatively thick, except for the United States. Chalk this up to politics. I've been hearing about this particular problem in relation to this paper for over a year now. Not having asked any of the members of the group directly I obviously am going off hearsay, but the lack of American samples is most definitely not a feature. It's a bug. In the supplement they also note that they couldn't get Na-Dene data from another research group. Almost certainly that's because of bioethical issues and legal contractual constraints. Despite all this drama, the scientific isn't too hard to understand. Aside from the nifty statistics one problem is that many of these native groups have European and African admixture, but there are workarounds to that (e.g., just pull out genomic segments which are indigenous, and use those). The outcome is neatly visualized in the figure below: 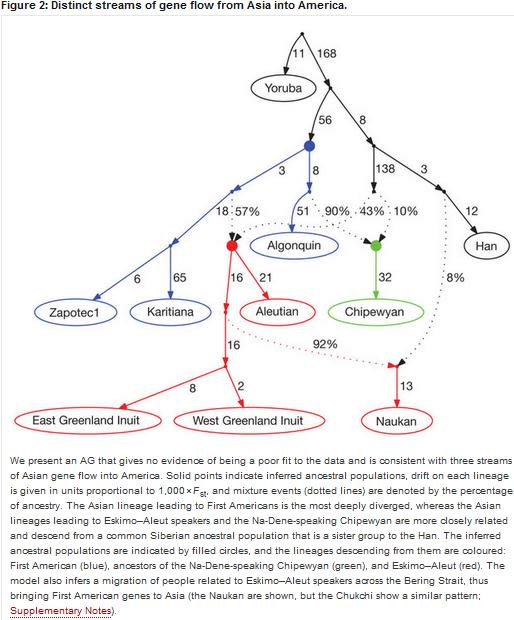 What you see here is that the "Amerind" group derive from one ancient founding lineage. This comports with other data which seem to imply some sort of bottleneck. The authors couldn't peg a date from their data, and so they support the proposition of a ~15,000 year date of colonization. This is aligned with archaeology (even if you reject Monte Verde, one can posit a sojourn in Berengia to explain the "gap"). One inference you can make from their caution about timing is that these are not newcomers; if dynamics outlined above were recent they'd probably be able to pick them up (e.g., measuring linkage disequilibrium decay since admixture). And as expected the authors found a north-south gradient in heterozygosity, what you'd see if the population went through serial bottlenecks north to south. But the non-Amerind populations are more interesting. The Eskimo-Aleut turn out to be a 50:50 mix between an Amerind group, what they term First Americans, and an Asian lineage related to Siberians. This is not totally surprising, but it is good to get solid grounding. Additionally, they report evidence of back-migration to eastern Siberia. Again, not too surprising, but it is a neat confirmation of the reality that the separation between the Old and New World was illusory in some deep ways. The Na-Dene population here, the Chipewyan, are a different case. They are ~90% First American, but also ~10% something else. That something else is also more Asian, but not quite the same as the non-First American component of Eskimo-Aleuts. This population X is quite possibly the Old World source for the Na-Dene. As the authors apologetically note they didn't have many other Na-Dene samples to explore this question in detail. But, there is one aspect which they explore a great bit in the supplements: some models suggest that the Paleo-Eskimo Saqqaq sample exhibits a mix with First Americans at 15%, and 85% with this Asian population. With these sample sizes the statistical significant doesn't seem rock solid, but it's obviously suggestive. If you don't remember, the Saqqaq sample comes from a man who died ~4,000 years ago. He seems to have resembled modern day Siberians more than Eskimo-Aleut, or indigenous peoples to the south. These data imply that the dominant component of the Saqqaq's ancestry may indeed have been the minor component in the Na-Dene! A final twist is that the First American ancestry of the Saqqaq and Chipewyan is somewhat different than the First American ancestry of the Eskimo-Aleut. This is important in establishing a distinct ethnogenesis of the various groups, and their relationships to each other (I take their assertion that the First American of the Eskimo-Aleut being more "derived" a hint to likely later ethnogesis of this group via admixture than the Na-Dene). To me the above implies that the closeness of the Saqqaq to the Siberian groups may be an artifact of the fact that the Eskimo-Aleut are synthetic populations, with ~50% First American, while the Saqqaq were only ~15% First American. Some have expressed curiosity as to how Na-Dene languages spread if the Chipewyan are only ~10% Na-Dene, using a grossly simplistic equivalency between language and ethnicity, but it strikes me that over time admixture could slowly reduce the genetic difference between the Na-Dene and their Amerind neighbors. By analogy, the Hui Muslims of China seem about ~90% Han Chinese genetically, but this can be easily explained by a very moderate amount of intermarriage over the past ~1,000 years, when you consider how small the Hui populations is in relation to the Han. One thing to note is that the Saqqaq may have been the first humans to settle much of the northern fringe of North America, and the Saqqaq man who was sequenced was alive during the very early centuries of this culture. One can easily imagine a rapidly expanding population pushing into uninhabited lands admixing very little with natives who did not exist. In contrast their Na-Dene cousins to the south were pushing into settled territory, and so experienced much greater admixture.

. The Eskimo-Aleut and Na-Dene erupted into a settled landscape, and dispossessed the indigenous groups of their lands. How? The standard explanation for the Thule replacement of the Dorset is that the former were better adapted to northern climes. I know of no explanation for the Na-Dene expansion, but it probably had some rationale, social or technological. The fact relatively "pure" Saqqaq were later supplanted by a genomically hybrid populations also points to the complexity of these migratory narratives. The First Americans "struck back" in this case, shoving aside the pioneers of northern living who had likely originated more recently from the margins of eastern Asia. Of course, the Eskimo-Aleut and related peoples were not First Americans only, rather, it was the old (First American) and new (Asian) ganging up upon the not so old or new (Asian). Addendum: Geneticists using classical markers and physical anthropologists have supported this three wave model. This genomic approach is simply sharper and more precise. Citation:Reconstructing Native American population history, doi:10.1038/nature11258