The Elephants in the Outbreak

They are considered the most noble creature to grace Earth. They have massive brains, complex forms of communication, the ingenuity for tool use, and the capacity to express emotions, including grief and empathy. Yet, as impressive as they are in size and majesty, elephants can still be felled by the most human of ailments: tuberculosis.Tuberculosis is an infection that has been infecting humans for millennia, but it is also a promiscuous organism that can infect the lungs of many other mammals. The ability of humans to transmit this infection to domesticated animals with a hearty sneeze or cough that sprays droplets harboring the bug has been known since the 19th century. It is an infection that has “let its roots into all animal species,” both wild and domestic (1).We have been aware of the ability of tuberculosis to infect elephants for millennia: a 2,000-year old Sanskrit treatise on veterinary medicine, the Hastăyurvĕda, makes mention of a pulmonary infection among these pachyderms similar to tuberculosis (TB)(2). A pandemic of the bug has also been tentatively implicated in the extinction of the elephants distant relative, the mastodon (Mammut americanum) as lesions characteristic of TB have been found in the ribs and the tarsal bones of the feet of mastodon specimens (2).There are currently 446 captive elephants in North America distributed among zoos, circuses, private owners, and animal sanctuaries (3). Over 60 cases among various herds have been diagnosed and confirmed with a TB infection since 1983, when an American circus elephant fell ill (4). Since then, isolated outbreaks among elephants and their human handlers have materialized throughout the United States in an ongoing, low-intensity, nationwide epidemic of elephantine tuberculosis.

Diagnosing the infection in elephants is difficult. For starters, many tubercular elephants are asymptomatic, and in those that do express signs, symptoms tend to be vague: weight loss, exercise intolerance, coughing, and respiratory secretions. Furthermore, diagnosis of TB in an elephant is a challenge, requiring a bacterial culture of what is called a “trunk washing,” in which the trunk is flushed with saline and the fluid and mucus are discharged into a heavy duty one-gallon plastic bag once a day for three days

. What is flushed out of the trunk is later cultured and grown in a laboratory to identify a TB infection. For elephants in captivity, trunk washings occur annually. Finally, conducting an epidemiological investigation into an outbreak can be hampered by the long latency of infection as well as the movement of elephants among various facilities and owners (5).

In the case of the Portland, OR outbreak in May of 2013, the annual trunk washings of Rama, a 20-year old Asian elephant, came back positive. Shortly after, antibodies to TB were identified in Packy, Rama’s 51-year old father, strongly suggestive of an infection 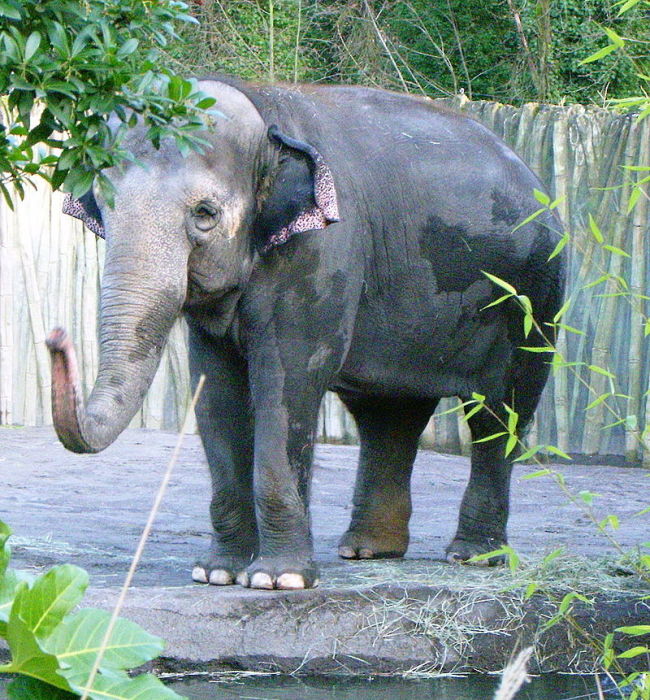 Packy, one of the elephants at the heart of the Oregon outbreak. Image: EncMstr. Click for source. Approximately 118 possible human contacts of the three infected elephants were identified, consisting of various employees and volunteers that had been within the 8,300 square foot of their enclosure or within 15 feet of the eight elephants housed at the zoo in the past year. Of those, 96 people or 81% of those contacts were medically evaluated for the infection and a total of seven people were diagnosed with the latent, non-active form of TB. The major risk factor for transmission that was identified during this investigation was, not surprisingly, close and prolonged "interspecies contact" in the form of several hours spent indoors with an infected elephant.How this outbreak occurred is unknown, although the CDC speculates that a zoo volunteer from 2012 may have been responsible for initially transmitting the infection to Rama, the first elephant case, who has since died from unrelated causes. Dr. Jennifer Vines, one of the lead investigators for the case, spoke of the case by stating “It was hard to make any conclusions.”Infections shared among animals and man, known as zoonoses, are not unusual or even that rare. These zoonotic infections are, however, classically thought of as transmitted from animal to human. Well known examples include rats spreading the plague via infected fleas, birds transmitting avian influenza to their farm handlers, and the Ebola possible spread to humans after consuming the meat of infected primates.

But animals are not immune to human diseases and “reverse zoonoses,” as they are sometimes referred to, in which a human swaps a pathogen with an animal are possible. Such instances include skin infections in farmers caused by

Staphylococcus and Streptococcus that are passed on to their cattle, mumps virus transmitted to pet dogs, and during the 2009 H1N1 flu pandemic several people infected their pet ferrets (6). Tuberculosis occupies the border in between as a “bi-directional zoonotic,” capable of reciprocal swapping between humans and mammals. It is the zebra, if you will, of zoonotic infections and one that continues to surprise in this modern era. ResourcesPacky, one of the infected elephants at the heart of this Portland outbreak, is the oldest male Asian elephant in North America and one of its tallest. To read more about the control of TB in elephants, a set of guidelines were published by the Department of Agriculture (USDA) and the American Association of Zoo Veterinarians (AAZV).