A new cross-disciplinary approach called GeoBioMed opens avenues to understanding how and why kidney stones form. 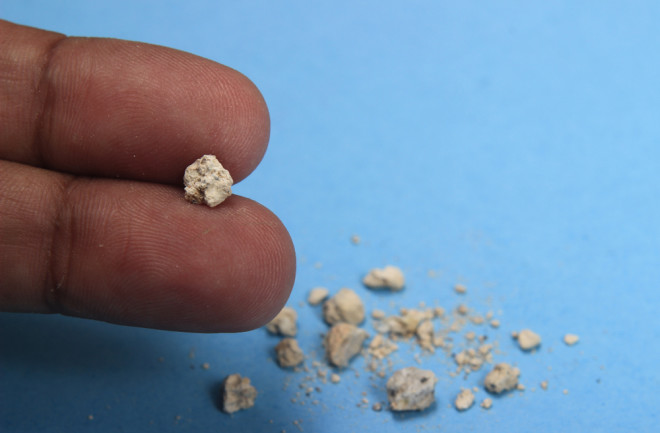 Over a period of three months to three years, compounds like calcium, uric acid and bits of organic matter coalesce into the crystallized structure we know as the kidney stone.

This formation process, as it turns out, is remarkably similar to geological processes in some coral reefs, hot springs and even ancient Roman aqueducts. After formation, they appear to dissolve, fracture and crystallize. When researchers probe the mineral layers in kidney stones, they find it looks much like a nanoscale version of the multi-colored strata of the Grand Canyon.

For the past several years, a team of experts in geology, urology and nephrology have analyzed 90,000 kidney stones from all over the world. In a study published last month in the journal Nature Reviews Urology, the team reports on this formation process and proposes a new, geology-based way to classify kidney stones.

What they found upends the previously accepted notion that once kidney stones form, they likely can’t dissolve under conditions found in the kidney. Instead, it appears that at least half of the stone’s volume goes through a process in which it dissolves and recrystallizes. This finding may shift how scientists approach kidney stones for years to come, from the way they’re treated to how they’re classified, and even how we understand the kidney’s microbial community.

“This idea of life, water, mineral interaction is really fundamental to everything,” says Bruce Fouke, geobiologist and director of the Roy J. Carver Biotechnology Center at the University of Illinois. “The human body is a life-water-mineral interaction machine.”

Kidney stones are one of the oldest and most prevalent ailments. The oldest known kidney stone was found in an Egyptian burial cloth dating back to 4400 B.C. Cuneiform tablets from Ancient Babylonia suggest stone formation may be related to beer and water consumption. Today, 12 percent of the world’s population, or nearly one billion people, is estimated to have a kidney stone at any given time.

These typically form when there is an abundance of calcium, oxalate or uric acid in the kidney. These materials can crystallize without dilution from fluid in the kidney. The process of passing a kidney stone can be as painful as giving birth, according to some women who have experienced both.

After kidney stones are removed from a person, either through natural passing or surgery, Fouke says that clinicians typically disregard them as no more than a crystallized lump. This paper turns that assumption on its head.

“Probably the most high fidelity, high resolution and sensitive indicator of long term history of the kidney is actually a kidney stone,” says Fouke, who leads the team.

To read this natural record, researchers can probe the mineralized layers using highly efficient slicing and imaging tools. Using a suite of established and novel tools, scientists can slice stones into sections as thin as rice paper. They then illuminate it with an ultraviolet light at a resolution of 10 nanometers, which makes the organic material in that section glow. They can create images showing the composition of each layer, allowing them to understand how compounds accumulate and dissolve in the kidney down to the minute.

In hot springs and coral reefs, microbes spur quick mineralization. The human body, on the other hand, has evolved what Fouke calls an “arsenal” of bio compounds to protect the body by slowing kidney stone growth. However, kidney stones seem to form far more layers than what has been observed in comparable natural settings.

Fouke says this process, called universal biomineralization, has been widely studied in geology but rarely applied to medicine. By approaching kidney stones from a geological lens, researchers created a new schema for classifying stones based on where they form in the kidney.

“In my work in coral reefs and hot springs and meteor impacts and all these other natural amazing environments on Earth, I saw great similarities, and they had nothing to do with Randall’s plaque or Randall’s plug,” Fouke says.

The team proposed a new, more nuanced classification scheme, which characterizes stones based on the chemical, physical and biological processes underpinning their formation.

What This Means for Future Research

Fouke says sometime in the near future, people may be able to better understand their kidney function after passing a kidney stone or having it removed. Within 15 minutes, clinicians may use a small benchtop lab to cut it and polish the stone, shine ultraviolet light on it and get a high sensitivity record of what the kidney is doing.

As researchers understand more about how and why stones form, they may be able to introduce certain treatments like drugs that can interrupt the crystallization process or encourage dissolution.

“We're too early to say exactly what treatment we have but I think once you start understanding what's going on, then one can imagine you might develop ways to interrupt that in a positive way,” says John Lieske, a nephrologist and director of Mayo Clinic’s Rare Kidney Stone Consortium and co-leader of the work.

Lieske says this could be a “game shift” in terms of how urologists and nephrologists think about the chemistry of kidney stones.

In upcoming studies, the team plans to build artificial environments where they can reproduce kidney stones to understand the role of different compounds.

Kidney stones are a prime example of mineral accumulation in the human body. But research on biomineralization could be key for tackling issues like climate change, environmental sustainability, human medicine and even space exploration.

“Biomineralization is so fundamental that life couldn't have started without it,” Fouke says. “And now we're seeing that there are a thousand applications within the human body and we’re just scratching the tip of the iceberg.”