The Clock Is Ticking on Superbugs

U.S. feels the walls closing in as drug-resistant infections spread. 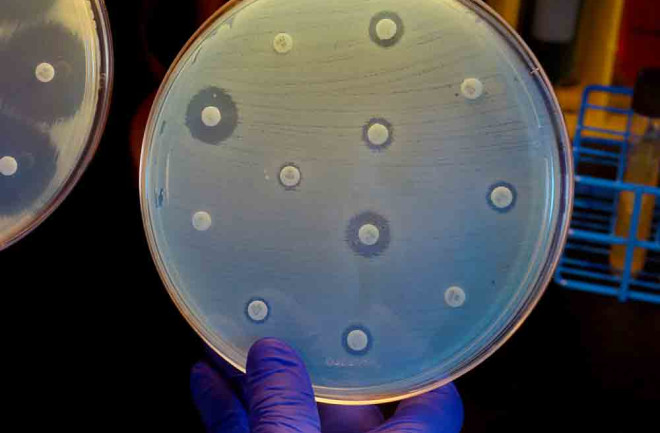 The superbug CRE, shown in a petri dish, is resistant to almost all antibiotics. | James Gathany/CDC

For years, United States public health officials have watched nervously as drug-resistant superbugs marched around the world, killing hundreds of thousands of people. Then in January, a report from the Centers for Disease Control and Prevention revealed that an elderly Nevada woman had died of a bacterial infection that defied even the biggest guns in the infection-fighting arsenal. That’s when many U.S. experts sounded the alarm: Time is running out to stop these deadly pathogens.

“We’re somewhere between total panic and a situation we feel confident we can manage,” says James Johnson, a professor of medicine and infectious diseases at the University of Minnesota. Already, superbugs claim 23,000 American lives every year, and over the past eight years, the number of hospitalized children who are resistant to antibiotics has increased sevenfold.

Globally, the situation is much worse: More than 700,000 die annually from drug-resistant infections, particularly in parts of Europe, Asia and South Asia. These regions have inadequate sanitary conditions that create breeding grounds for lethal pathogens — the Nevada woman picked up her fatal bug in India. Some experts warn that new strains of drug-resistant bacteria, caused by years of antibiotic use in humans and livestock, are as concerning as Zika and Ebola. The World Health Organization identified a dozen groups of bacteria that pose the greatest threat.

It could get just as bad in the U.S., warns Johnson. Infected international travelers can accelerate the superbug spread, and domestically there is a large population vulnerable to infection — the frail elderly and people who have compromised immune systems. If antibiotics become less effective, even routine procedures like appendectomies and C-sections could be perilous, and could cause up to 6,300 deaths per year.

Still, the U.S. situation has improved, mainly because of more vigilance and better infection control techniques in hospitals where drug-resistant bacteria can be endemic, says John Quale, an infectious disease specialist at SUNY Downstate Medical Center in Brooklyn. “We’re doing a better job because people are scared enough now.”

Some promising antibiotics are in development and should be available soon, but none is considered the magic bullet. In the meantime, Johnson says, “we need to find ways to get docs to be better stewards of antibiotics.”