The Climatic Origins of the Malaysian Nipah Virus Outbreak

One of the hardest questions to answer in an infectious disease outbreak investigation is "Why?" Why then? Why there? These questions can be almost impossible to answer - not only because of their heady metaphysical nature but also because of the difficulty of assessing the minute interactions between microbe, environment and human host. Public health officials are often left shrugging their shoulders, half-heartedly admitting to an unsatisfied public that they just don't know and indeed may never know, later drowning their sorrows in dark and smoky bars with cup after cup of the metabolic waste products of unicellular fungi. 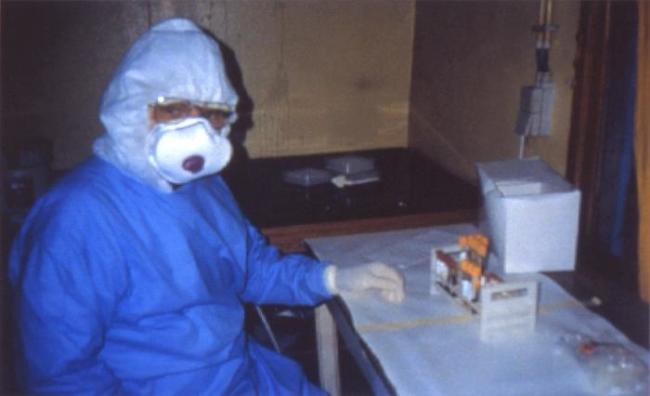 An epidemiologist decked out in personal protective equipment (PPE) while conducting field work on the Nipah virus outbreak in Malaysia. Source: CDC, Public Health Image Library. In the final scene of the Contagion, a film that depicts the rapid spread around the world of a (bogus) fatal respiratory pathogen called MEV-1, director Steven Soderbergh elegantly demonstrates the why and how of the origins of the fictional viral pandemic. Behold: In some exotic tropical locale, a bulldozer ravages a grove of palm trees, dislodging a cloud of angry bats that flee to a nearby stand of banana trees for shelter. One bat carries a precious cargo of half-eaten, saliva-covered banana to what appears to be a pig farm, dropping its partially-consumed treasure to the ground, where it is quickly spotted and devoured by a keen-eyed piglet. That pig is selected and transported to the kitchen of a Macau casino, where it lies dead and trussed as it awaits the final stage of its culinary preparation. A chef is shown squishing herbs into its mouth before he's distracted by a kitchen lackey. Wiping his hands on his apron, he leaves the kitchen to shake hands with Gwenyth Paltrow's character, our index patient, thereby initiating the global journey of MEV-1. In this brief narrative montage, the origins of the MEV-1 pandemic are laid bare, simple and orderly with chilling background music for the audience's pleasure to boot. How tidy! Perhaps a little too tidy... The scenario depicted at the end of Contagion, while certainly plausible, is in most cases virtually impossible for public health researchers to reconstruct. To wit, while we are often able to reach general conclusions as to the origins of an outbreak, it is rare for such a clear chain of events to emerge. But the outbreak depicted in the film is loosely based upon the 1998-1999 emergence of Nipah virus in Malaysia, the same virus that introduced itself to the world by erupting into a massive outbreak among pig farmers and abattoir workers in Malaysia. As in Contagion, there, too, was a tipping point, a series of spillover events closely tied to human manipulation of the environment that led to one of the most frightening and costly outbreaks in recent history. 1997 and 1998 were ugly, hazy years for Malaysia. Massive swaths of tropical rainforest in Indonesia were slash-and-burned for industrial plantation and pulpwood, resulting in an impenetrable haze that cloaked the peninsula and the surrounding Southeast Asian countries for months. 12 million acres of rainforest were deforested and the haze so obscured the sunlight in southern Malaysia that flowering and fruiting trees could not photosynthesize. Crops failed throughout the country (1). 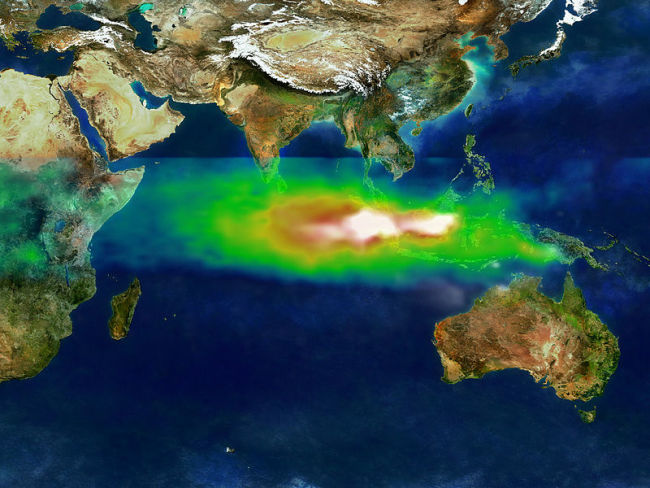 This image from NASA's Earth Probe Total Ozone Mapping Spectrometer (TOMS) satellite instrument shows the extent of the air pollution resulting from the Indonesian forest fires in fall of 1997. White smoke hovers over southeast Asia, while the green, yellow and red pixelation indicates ozone or smog. Source: NASA/GSFC Scientific Visualization Studio, based on data from TOMS. At the same time, a drought precipitated by the El Niño Southern Oscillation (ENSO) event didn't help the ecological and environmental status quo. Cases of an unusual febrile encephalitis falling both human and swine began in the fall of 1998 among the pig farming communities of the northwest Malaysian district of Kinta. With each pig exported from Kinta to the districts of Negeri Sembilan, Sungai Nipah and Bukit Pelanduk, more and more farms were stricken by an illness that was initially mistakenly identified as Japanese encephalitis, a disease spread by mosquitos (2). While government workers provided vaccinations and mosquito fogging, pigs exported to Singapore for slaughter infected eleven abattoir workers on that tiny island, one man died, and the international impact of the disease continued to expand. This was no mosquito-borne illness but something quite different, though the truth of just what the disease was and how it was spreading would elude Malaysian authorities for months. Meanwhile, the ethnic Chinese minority that largely work as pig farm owners and abattoir workers in the country were ostracized (3). Pig exports crashed. The pig industry - one of the largest in southeast Asia - shut down temporarily and more than US$100 million in revenue was lost (4). Finally, upon the discovery of a novel virus identified as spreading from pigs to humans, the Malaysian government destroyed 1.1 million pigs destroyed at a cost of US$3.5 million (4). Approximately 265 people fell ill and 105 died (5). Once Nipah virus was detected in fruit bats such as the Malaysian flying fox (Pteropus vampyrus) and the Island flying fox (Pteropus hypomelanus), researchers at the College of Kuala Lumpur in Malaysia began to suspect that "anthropogenic events" may have been responsible for this dreadfully fatal and expensive outbreak. The cataclysmic combination of the haze, deforestation and drought devastated the foraging habitats of the bats, prompting a widespread migration (1). Seeking sustenance and refuge in the still fertile regions in the north of the country, the bats settled into cultivated orchards of mango, durian, water apple and rambutan that just so happened to be commonly interspersed with piggeries. 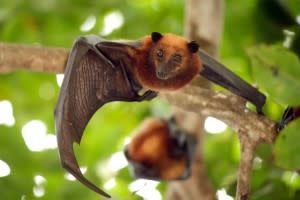 A fruit bat of the Pteropus genera photographed in Tioman, Malaysia. They are also known as flying foxes. Image: Stephane Bidouze, Shutterstock. Farmers and hunters living and working within the affected regions would later tell researchers that they began to notice bats roosting in nearby forests and conducting late-time raids on the orchards to sup flower nectar during the ongoing environmental crisis (1). The orchards, with their dense bunches of hanging fruit, were a perfect target for refugee bats and investigators would later find excrement and partially-eaten fruits littering pigsties, serendipitous snacks for hungry pigs (5). Those same pigs became infected and the virus replicated, amplifying in overwhelming numbers. Many fell ill, coughing and spasming in their concrete stalls and spreading the virus to others via nasal and throat discharges. Abattoir workers slaughtering the pigs used unhygienic methods - failing to use gloves, face masks or protective clothing - and fell ill with the virus. Nipah virus had been simmering away in bats throughout Malaysia for many years, virtually unnoticed (6). The moment of its introduction to humans and pigs from bats lay in a surreal storm of events - the fires and deforestation, the El Niño effect, the location of pig farms near orchards, the fact that bats are highly mobile creatures and that pigs are capable of "amplifying" viruses that can then be transmitted to humans. We've seen the awesome power and havoc that the climate can inflict upon our style of life and our cities - Hurricane Sandy's wrath in the northeastern US and the multiyear drought afflicting Texas are only two of the most recent examples. But there are other changes that are less immediately visible, that lay under the surface of our understanding and comprehension. Long-standing relationships in the ecological and microbial landscape are altered and reformed due to changing weather patterns and our environmental manipulations; animals and insects relocate to safer and more favorable habitats, bringing their microbial baggage with them. Ticks are on the rise in the north responding to changing climatic conditions, increasing the prevalence of Lyme disease. Mosquitos have been introducing West Nile Virus throughout the globe, accompanying trends of record-breaking heat waves. The Nipah virus outbreak has a relatively tidy narrative in terms of tracing the origins of its big introduction to mankind. But this is an exception to the rule. The emergence of this novel virus in Malaysia in the late '90s, it's spillover from wild creatures to domestic animals and then on to humans, is a sobering reminder that we live in an impenetrably complex and multifaceted world. As we exert an ever greater effect on our surrounding ecosystems and the environment, we need to be aware that it just might bite back. Resources A helpful fact-sheet from the CDC on Nipah virus and its kissing cousin Hendra virus. The WHO has a map overlaying recent Nipah and Hendra virus outbreaks with the geographic distribution of their animal vectors, fruit bats of the Pteropodidae family. Wikipedia has a great summary of the 1997 southeast Asian haze event, widely recognized as a "large-scale air quality disaster." If you're into that kind of thing, the Food and Agriculture Organization of the United Nations have a manual on the "Diagnosis of Nipah Virus Infection in Animals." It. Is. Thorough. And hits on everything from laboratory diagnosis to economic and political management of an outbreak to References 1. KB Chua et al (2002). Anthropogenic deforestation, El Niño and the emergence of Nipah virus in Malaysia. Malay J Path. 24 (1): 15-21 2. HT Chong et al. (2009) Nipah virus and bats. Neurology Asia; 14: 73–76 3. T Vu (2011) Epidemics as Politics with Case Studies from Malaysia, Thailand, and Vietnam. Global Helath Governance Journal.4(2): 1-11 4. Animal Production and Health Commission for Asia and the Pacific (January 2002) Manual on the Diagnosis of Nipah Virus Infection in Animals. Food and Agriculture Organization of the United Nations. Thailand: Regional Office of Asia and the Pacific (RAP). Source. 5. Looi et al (2007) Lessons from the Nipah virus outbreak. J Pathol.29(2): 63-7