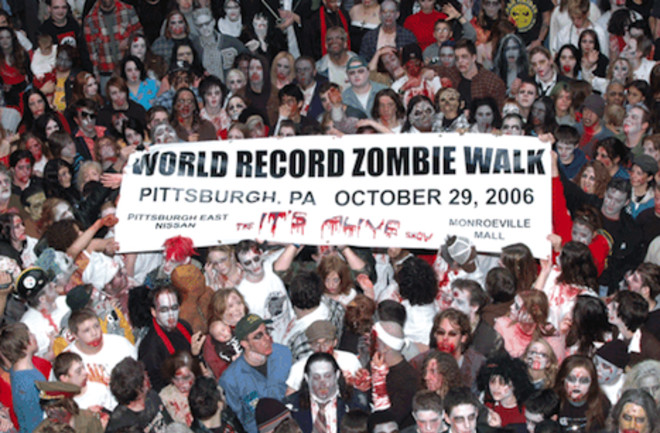 Zombie stories are often about the utter failure of the government to deal with a big problem and, thanks to George Romero, also a great way to expose issues of class and social status. No one really believes they might attack one day. Zombies are a metaphor, like vampires or werewolves, for the horrifying and uncanny aspects of the human. They also remind you that, when things really hit the fan, you're on your own. So be prepared! The Center for Disease Control does not want you to be caught unawares. In a post that walks the line between "ha ha this would never happen" and "but seriously just in case, you never know," Ali S Kahn details the worthy forms of emergency response to hoards of the necrotic, brain-seeking undead:

I'm wary of the idea of meeting at the mailbox. Though I'm no expert, I have a strong suspicion that the mailbox is insufficiently fortified against the shuffling corpses invading the neighborhood. But hey, I'm not at the CDC, so I'm going to trust Kahn on this one. Maybe she keeps a shotgun (or cricket bat? Lobo?) in her mailbox. I just don't know.

What I do know is I need to get an emergency kit like the one on the right. Because a zombie hoard is nonsense. But the Singularity might trigger a new stone age and I won't be able to dash off to Wal-Mart for supplies. Should I be embarrassed that a small part of me hopes/expects some sort of epic disaster for the selfish reason that modern life doesn't let me use a flashlight or flint in day-to-day routines? I mean, I just don't have enough reasons in my life to use a kerosine lantern.

Maybe that’s how I can write off my next camping trip: research for zombie apocalypse.

For more on zombies, check out my series, the Ethics of the Undead.

Image of zombies kindly broadcasting their presence via Wikipedia