The Cancer That Itches

A "deep" itch can signal that something's really wrong 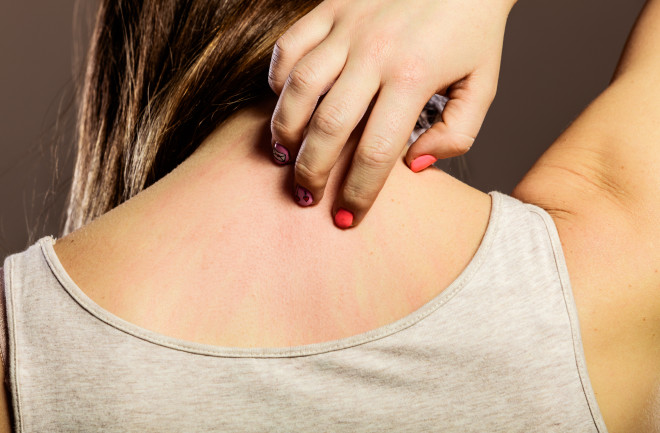 Greta, as I will call her, cried out in an exasperated refrain that I had heard endless times before. “I just can’t stop scratching! Sometimes the itch is in other areas, but mostly it’s down there.” She pointed to a place on her lower back. “I have to claw at it all the time, and it doesn’t ease up. It’s a different kind of itch, like I’m getting eaten up on the inside.” I examined the area, but it was remarkable only for its scratch marks.

I reviewed her history. No diabetes, no recent bites, no hives, no recent infections, no new drugs or allergies, and no change in her emotional state that might account for this malady. Greta also said she had no liver, gall bladder, or kidney disease. She was not a drinker, smoker, or drug user. She had suffered with this persistent itch for almost a year and had never had any symptoms like it before.

For the first few months that she experienced the itch, she was pregnant with her second child. “This didn’t happen the first time. I figured maybe it was just something that happens. But then after I had the baby it kept going on,” she said.

When I first saw Greta, it had been six months since her pregnancy. Searching for clues, I started with the general overview on itch, an entity we call pruritus in medical lingo.

Pruritus starts with an external stimulus—dust, touch, a mosquito landing on your arm—and is a built-in defense mechanism that alerts your body to the potential of being harmed. If the stimulus goes over the threshold when it scratches your skin’s surface layer, dermal skin receptors will send an immediate signal through fibers in the skin to your spinal cord and then up to the cerebral cortex in your brain, which tells you to scratch. You may feel some relief when this itch response is temporarily interrupted, but a persistent itch may result in a chronic itch-scratch-itch cycle.

The term itch has developed many connotations in our society. Researchers have found that songs get stuck in our heads be­cause they create a “brain itch” or “cognitive itch” analogous to histamines. These can be scratched only by repeating the tune again and again. Thus, “Who Let the Dogs Out (video)?” could be considered the aural equivalent of the itch that was driving Greta batty.

Senile pruritus often refers to the dry skin of old age. I never liked that term, although it dates back to a time when the word senile had a more benign connotation, perhaps like misplacing your keys instead of feeling your mind slip into the shadows.

Greta’s itch was too localized for an entity like scabies, which has a preference for the night and can affect anyone. What about any bone changes that could be sending itch signals to the surface? I had read a study in which several people who reported itching of the lower back and groin were found to have underlying back problems; disk disorders might have resulted in neurological and receptor skin problems.

Given the fact that every adult is covered by about 20 square feet of skin that is constantly exposed to possible irritants, we are all bound to get an itch now and then. I reviewed any external reason for Greta’s itch, including contact dermatitis, but she insisted that the itch felt “deep.” Underlying meta­bolic conditions that can produce pruritus include renal failure, HIV, type 2 diabetes, thyroid or parathyroid disease, iron-deficiency anemia, neuropathy, hepatic disease, or malignancy. Medication can also be a cause.

I checked all of Greta’s lab tests, including thyroid disease, HIV, allergy profile, hormonal tests, and a complete blood count. The blood tests showed no abnormalities.

Until I could arrive at a definitive diagnosis, I prescribed Greta oral and topical anti-itch products. On follow-up she reported that these muted the discomfort a bit, but she still suffered from itch.

Because of the persistence of her itching, Greta insisted we “test her skin,” so we did a biopsy. The analysis reported “spongiotic dermatitis,” a rather benign entity that most likely reflected her scratching.

During a subsequent visit, she reported she had lost 20 pounds in the previous six months and had told her mother about it. Her mother blamed it on “female troubles” and told Greta she should see her ob-gyn.

I had whittled down the possibilities one by one, and little was left but to go deeper. After I reviewed my results with Greta, I agreed with her mother’s intuition: I had a clinical suspicion of the underlying problem. She returned to her ob-gyn for a Pap smear, a test in which cervical cells are analyzed for abnormalities.

Greta’s Pap smear was abnormal. The next step was a biopsy. It indicated cervical cancer, but luckily the tumor invasion was very superficial. Greta had not ruled out having more children, so she elected treatment by cold knife conization, a type of local excision, instead of a hysterectomy.

When cervical cancer is caught this early, the five-year survival rate is greater than 95 percent. Following her surgery, Greta recovered with no problems. Within a few weeks her awful itch diminished and then vanished. She got regular medical follow-ups and had no further problems.

The cervix is the conical, inch-and-a-half-long portal to the uterus, and there are two main types of cervical cells that turn cancerous. About 80 to 90 percent of cervical cancers originate in the squamous cells that line the exterior of the cervix. The remainder begin in gland cells inside the cervix. This second type has become more common in women born in the last two to three decades.

When women have regular Pap tests, preinvasive cervical cancers can usually be found early. There’s now a vaccine that protects against certain strains of human papillomavirus (HPV), the genital virus that is often blamed for cervical cells’ taking a turn to cancer. The HPV vaccine is most effective before a person becomes sexually active.

A few years after this ordeal, Greta came to see me for a spot on her face. Why? “It itches. I remembered what happened before, and I came right in,” she said.

Sure enough, the biopsy of her face revealed a basal cell carcinoma. Many skin cancers are diagnosed because of itch and bleeding. In her case, the search and destroy mission caused by her other recalcitrant itch had raised the ante.

Robert Norman is a dermatologist in Tampa, Florida. The cases described in Vital Signs are real, but the patients’ names and other details have been changed.