When she’s looking for a mate, how does a female know what she likes? Macho mating displays—turkeys strutting, lions roaring, bighorn sheep colliding—quickly tell her who is biggest and burliest.

But some females prefer a more subtle approach. Evolutionary ecologist John Endler of Deakin University in Australia discovered that among great bowerbirds, pigeon-size birds native to northern Australia, females are dazzled by craftsmanship. In nearly every species of bowerbird, males impress females by building elaborate structures called bowers: long, twiggy corridors that open to a courtyard decorated with small objects. Great bowerbirds go one step further, creating optical illusions to intrigue the ladies and make them more likely to mate.

Endler realized the wooer uses a trick called forced perspective. The birds arrange objects by size, so the smallest are closest to the entrance and larger pieces farther away. From the female’s point of view inside the corridor, the bigger, more distant items look about the same size as the nearby smaller ones. The courtyard may appear smaller, potentially making the male seem larger to deliberating females. Photographers regularly use the same trick. If you stand some distance from the Leaning Tower of Pisa, a friend can take a picture that looks as if you are propping up the tower. Creating this illusion is a priority for great bowerbirds. When Endler rearranged their objects, they put their courtyards back in order within three days.

This winter Endler described another possible motive for the illusion: mesmerizing the female. He found that the longer she stays to watch the male in his courtyard, the more likely she is to mate with him. Endler’s hunch is that as the male darts around waving a trinket in his beak, the bauble seems to change size against the backdrop. Fascinated, the female lingers to look—and her choice is made.kat mcgowan

Gray and white bones, shells, and pebbles festoon most great bowerbirds’ courtyards. But researchers have also found bottle caps and plastic figurines there—items apparently discarded in the forest. A single courtyard may contain as many as 5,000 carefully arranged objects.

When a female arrives, she enters the corridor and inspects the male’s work. He sneaks around the side of the bower, waving a brightly colored item such as a shell or a bit of plastic in his beak in hopes of holding her interest. 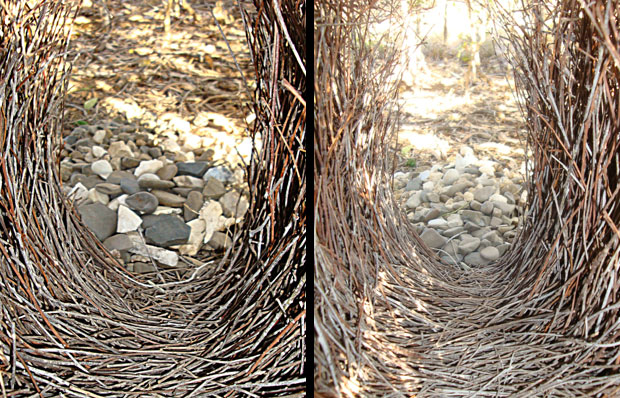 A male bowerbird has arranged rocks from smallest to largest (right). The illusion makes a male standing in the rubble appear larger and more appealing from the female’s perspective. At the left is the same structure with rocks reversed by researchers so the larger ones are closest. Now the foreground is more prominent, which would dwarf the male.

As a curious female enters, the male waits in the courtyard, holding a trinket. If the lady lingers, he will approach and try to mate. A male bowerbird typically lives 30 years and begins collecting objects for his courtyard by age 5. When finished he may call from a nearby tree, telling females to check out his digs.