The “Black Death” Bacterium Began Its Rampage in China 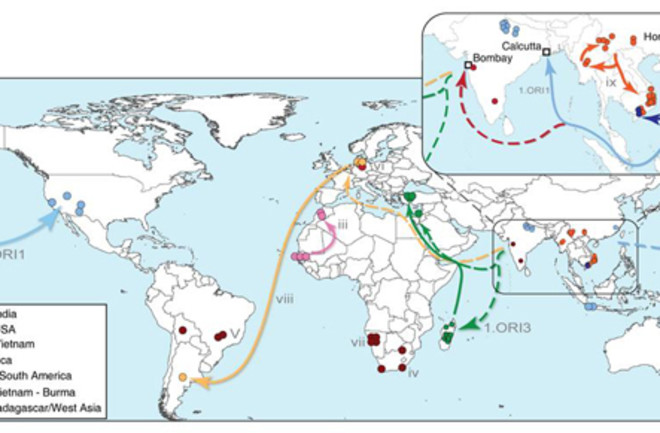 Three times the plague has appeared in deadly force. And all three times, scientists have found, the disease-bearing bacteria originated in China and spread across the world through different routes. The plague's most famous appearance came as the Black Death in 14th century Europe, when it wiped out nearly a third of the population. But it also struck as the Justinian Plague in the Byzantine Empire of the 6th century, and a less severe outbreak spread around the world and reached the American mainland in 1900 (see map above). This week in the journal Nature Genetics, Mark Achtman and colleagues rebuilt the evolutionary history of the bacterium Yersinia pestis, the cause of bubonic plague, and traced all three major waves of plague back to a starting point in China.

By looking at genetic variations in living strains of Yersinia pestis, Dr. Achtman’s team has reconstructed a family tree of the bacterium. By counting the number of genetic changes, which clock up at a generally steady rate, they have dated the branch points of the tree, which enables the major branches to be correlated with historical events. [The New York Times]

That analysis pointed to a common ancestor of the three strains that would have existed more than 2,000 years ago. Says Achtman:

And why China, anyway?

The likely origin of the plague in China has nothing to do with its people or crowded cities, Dr. Achtman said. The bacterium has no interest in people, whom it slaughters by accident. Its natural hosts are various species of rodent such as marmots and voles, which are found throughout China. [The New York Times]

Not Exactly Rocket Science: The Secret of Drug-Resistant Bubonic Plague

80beats: Malaria Came From Gorillas to Humans, and From Humans to Bonobos

Image: University College Cork (the spread of the third wave of plague, beginning in 1894 in Hong Kong)