The Biology and Evolution of Runner's High

The term 'runner's high' is a bit of a misnomer. But it has been linked to significant improvements in mental health and overall well-being in the human body. Evolutionary biologists are unravelling the how and why. 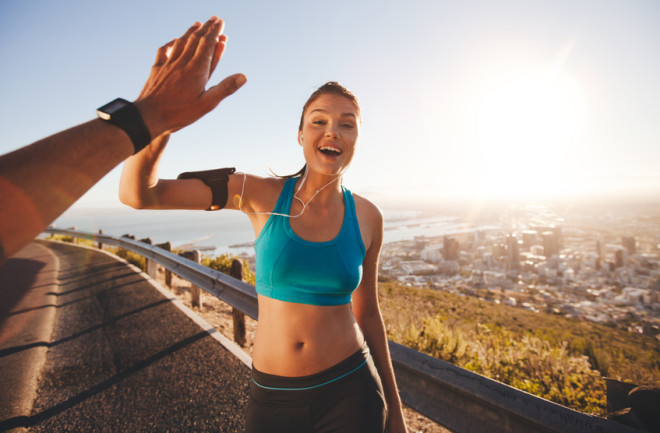 Years ago, when David Raichlen got back into distance running, he noticed a swift improvement in his mental health. “This doesn’t make sense,” he thought. “Why would purposefully engaging in energy output for no reason make me feel good?”

It’s not what most humans would have likely wondered after experiencing what’s colloquially known as runner’s high. But Raichlen is an evolutionary biologist and professor at the University of Southern California. He knows the intricacies of how the human body evolved to conserve energy, rather than waste it.

It would make more sense, he thought, if exercise left people feeling crummy. That way people would only move for crucial reasons, like securing nourishment. To the contrary, however, cardio seems to release a cocktail of brain molecules that lift moods, reduce anxiety, blunt pain and leave people feeling euphoric.

On top of that, we now know exercise improves overall brain health — enhancing the formation of new brain cells as well as the regeneration of myelin (the sheath that insulates nerves). For people with low to moderate depression, it has also proven to be as effective as antidepressants in numerous trials.

Over the past 20 years, Raichlen and other researchers have helped unravel the evolutionary mystery behind this biological realty in our bodies.

The Physiology of Runner’s High

First things first: The phrase “runner’s high” is a bit of a misnomer.

The fact is, most forms of cardio when done intensely and long enough will trigger feelings of euphoria. That means cyclists get high, too, along with swimmers, rowers and of course runners. Researchers have only recently begun to grasp what’s happening in the brain to bring on that groovy vibe.

Initially, they thought it had to do with endorphins, which bind to the brain’s opioid receptors, blunting people’s pain and, possibly, blissing them out. Then German researchers gave study participants a drug that blocked the brain’s ability to respond to endorphins. After running for 45 minutes, the study participants still blissed out, which meant that endorphins weren’t the only molecules involved.

Soon, a competing theory gained traction: The body’s natural endocannabinoids must be the engine. Related to mood and reward, endocannabinoids are similar to the molecules in cannabis that get people stoned. Unlike cannabis, however, exercise-induced endocannabinoids only seem to target specific brain centers. That’s why a running-induced high feels amazing — but it doesn’t lead to the munchies, fits of laughter or other cannabis-related symptoms.

More recently, however, the consensus is moving in a different direction. It may not be one magical brain chemical that gets exercisers high, but rather a cascade of them. “Exercise leads to the generation of tons of different molecules that have physiological effects,” Raichlen says.

In addition to endorphins and endocannabinoids, monoamines — like serotonin and dopamine — may also play a role, as well as neurotrophins like Brain Derived Neurotrophic Factor (BDNF). It’s likely these chemicals act in concert with each other, with some of them blunting pain and others bringing on a sense of calm. “It’s not super clear what’s responsible for what feeling,” Raichlen says. “They’re all working in some way.”

Why Runner’s High Exists at All

Because science is always evolving, years from now we might hear about completely different brain chemicals at play in this body high. One thing we do know for sure is that people experience exercise-induced well-being, which gets us back to the question that Raichlen asked years ago: Why?

His curiosity took him to a remote area of Tanzania. That’s where the Hadzas — one of the last hunter gatherer tribes on Earth — live and forage. Along with Brian Wood of Yale University and Herman Pontzer of Hunter College, Raichlen lived with the tribe off and on for several years, trying to understand how their lifestyles led to improved health outcomes.

Interestingly, despite all of the dire warnings we hear about the dangers of sitting, the Hadza rest about as much as industrialized humans do in the modern world. Though they squat on their haunches rather than sitting on foam-filled office chairs.

“They’re squatting for nine to 11 hours a day, which is a similar number of hours as many of us spend sitting at our desks,” says Raichlen. “The difference is that when they’re up, they move at a higher intensity. As a result, they meet and far exceed physical activity guidelines without sitting less.”

So, what does any of that have to do with runner’s high? It’s likely that ancient humans were quite similar to Hadza tribe members. To find food, they had to do more than just use their muscles to walk and forage. They also had to use their brains. Ancient humans with strong memories remembered where berries, seeds, roots and other morsels tended to grow, as well as how to get there. They also knew how to find their way back home after walking long distances, with no road signs or maps to guide them.

On top of all that, ancient humans who enjoyed foraging probably did it more often. The ones who could walk long distances without feeling a ton of pain most likely foraged for a longer period of time before calling it quits.

All of this may be why exercise and brain health are so closely linked, suggests a 2016 paper from Raichlen’s lab. That’s because ancient humans who excelled at gathering caloric morsels tended to be more fertile, passing their genes onto the next generation.

Why Walkers Don’t Get High

In another study, Reichlan’s team asked 10 people to walk, jog or run on a treadmill at varying intensities for 20 minutes, taking samples of their blood before and after each session. Notably, leisurely walking didn’t lead to much of an endocannabinoid release. But once people jogged slowly (at 70 percent of their max heart rate) or ran moderately (at 80 percent), endocannabinoids jumped.

The results beg the question: If runner’s high is wired in from evolution, why isn’t there also a walker’s high? After all, the “gathering” part of survival surely involved walking, right? Well, that depends on one’s context of foraging. As it turns out, traditional hunter gatherers move at a much faster pace than the speed used by urbanized humans today — perhaps meandering through an apple orchard, or through grocery store aisles in a hurry.

“When hunter gatherers are foraging, they’re doing it at a good intensity,” Raichlen says. “Anecdotally, I’m in pretty good shape and I run for fun and exercise. When I am out with them, it’s exhausting. They’re walking at a pretty high speed.”

Why Some People Hate Exercise

One other conundrum: If cardio makes people feel so good, why don’t we all do it more regularly?

More likely, however, this phenomenon has to do with intensity and duration, Raichlen says. Some people aren’t fit enough to exercise briskly and for long enough to get the cascade of brain chemicals that brings on bliss.

“I’m convinced that if people are able to be physically active over a longer period of time, they’ll experience these mental health benefits,” he says.

So, if you want that natural high, keep at it, moving a little longer and a little faster than your usual pace. Eventually, you’ll likely hit the euphoric jackpot.