The biological bases of behavioral variation

Alex Tabarrok points me to a new paper on the effects of Toxoplasma gondii, Increased incidence of traffic accidents in Toxoplasma-infected military drivers and protective effect RhD molecule revealed by a large-scale prospective cohort study:

a more than six times higher rate than Toxoplasma-free or RhD-positive subjects.

The idea of an infection resulting in behavioral changes shouldn't be that surprising, as children we are all told about the dangers of rabies. These sorts of phenomena, whereby microorganisms hijack the behavioral phenotype of hosts shouldn't be that surprising to anyone familiar with the manner of thinking introduced in The Selfish Gene. But there's a difference from an idea in theory and a concrete and prevalent instantiation of that idea. Infection by Toxoplasma gondii is relatively common, but it also varies a great deal by region. The idea that some human cultural variation might be due to infection by a pathogen is likely shocking to many, but this may well be the tip of the iceberg, the effect of infection by Toxoplasma gondii seems easily measurable via reaction time. But it also seems in relation to reaction time the effect of Toxoplasma has an interaction with Rh phenotype and varies as a function of time. The relationships are illustrated by Figure 1: 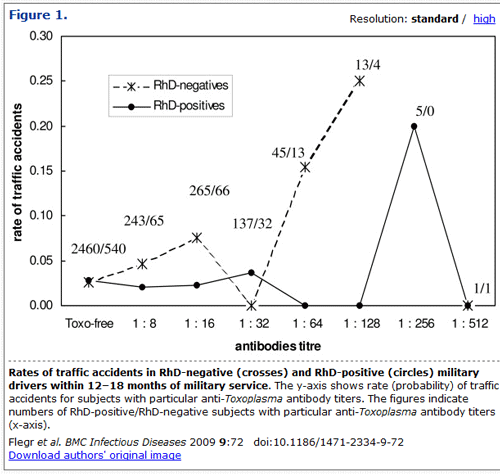 The rapid immediate deterioration of reaction time, and so the heightened risk of accidents, seems to be most pronounced in those with the Rh- blood phenotype. This phenotype is relatively famous because of its utility in simply explaining recessive expression; since Rh- is a "lack of," one copy from either parent confers Rh+ status. In a random mating population the frequency of Rh- is defined by a simple Hardy-Weinberg relation: p^2 + 2pq + q^2 = 1 Where: p = frequency of Rh+ conferring allele q = frequency of alleles lacking Rh+ function 2pq = the frequency of heterozygotes, who have only 1 Rh+ allele but expression the Rh+ phenotype Remember, humans carry 2 copies of each gene, and the individual variants of the genes are alleles. So, in a population where 50% of the alleles are Rh+ conferring and 50% lack the ability to produce the factor, by the HW relation you would presume that: 25% are homozygotes for Rh+ = (0.50)^2 25% are homozygotes for Rh- = (0.50)^2 50% are heterozygotes, Rh+/Rh- = 2(0.50)(0.5) Since heterozygotes express the Rh+ phenotype you have: 75% Rh+ = 25% Rh+ homozygote + 50% heterozygote 25% Rh - = 25% Rh- homogyzote This is a moot point in most human populations. Outside of Europe the Rh- phenotype is nearly absent, because the frequency of Rh- alleles is very low. Imagine for example a population where 1% of the alleles are Rh-. That implies that 0.01% of the population will be Rh- negative. Why does Rh status matter more practically? There are important health ramifications. Mothers who are Rh- negative but have Rh+ fetuses (obviously these are heterozygotes) can exhibit complications, especially after the first pregnancy. The population with the highest known frequency of Rh- are the Basques, and during the pre-modern period when the genetics of blood groups were not known their neighbors would suggest that Satan had cursed them, the rates of miscarriage were so high. Rh status matters for biological fitness. In a population where everyone is Rh- or Rh+ there won't be a problem, but in a population where there are appreciably frequencies of both the serological incompabilities should drag down fitness. It seems that frequencies of the Rh- allele increase the further west you go in Europe, with the Basques being modal. Whereas 15% of white Europeans are Rh-, 30% of Basques are. The evolution story behind this is muddled. There is some data that to the effect that Rh+ heterozygotes, those who carry a null and functional copy of the allele,

This heterozygote advantage could then serve as a driver for balancing selection, whereby below a particular frequency the Rh- allele is actually beneficial. Remember, as the frequency of Rh- alleles drop the proportion who are within Rh- homozygotes decreased radically. Do I think Toxoplasma is responsible for Rh frequencies? I doubt it. We know what we know, and don't know what we don't know. It seems there we're scratching the surface of the complex interplay of pathogens, genotypes and environments. Likely we don't know the full effects of Toxoplasma, nor do we know how to responds to a variety of genetic backgrounds. Cite:BMC Infectious Diseases2009, 9:72doi:10.1186/1471-2334-9-72