The Bible tells you to avoid demon rum

A few quick points on the post below. When it comes to some of the natural science related posts on this weblog I put a lot of effort quite often into them. On the other hand, when I present some quantitative social science data, it's all preliminary and exploratory. I stopped presenting regressions a while back because it took too much time to do it right, since it's so easy to manipulate the variables into the appropriate configuration of p-value significance, even unconsciously. I provide the link to the GSS and the variables in the hope that others with some time on their hands will follow up. Together we can aggregate into a lot of labor input, if we so choose. Now, in terms of controls for the results below, I did look into that, and I came to the conclusion (supported by some logits I ran) that the biggest influence on the patterns is BIBLE. This is the question from the GSS:

In other words, the variable is an index of Protestant Fundamentalism. As you can see below, separating out this category into its classes reduces a lot of the variance. A few notes. SEI = "socioeconomix index." It runs from 17 to 97, and I combined it into three categories. On Wordsum I also combined at the extremes, since the N was small there. I also took the Census Divisions and combined them so that all the Southern regions are together, and so forth. Here's what I input into the GSS browser: Row: drink Column: region(r:1-2"Northeast";3-4"Midwest";5-7"South";8-9"West") wordsum(r:0-3;4;5;6;7;8;9-10) degree region sex sei(r:17-30"Low SEI";30.1-70"Middle SEI";70.1-98"High SEI") 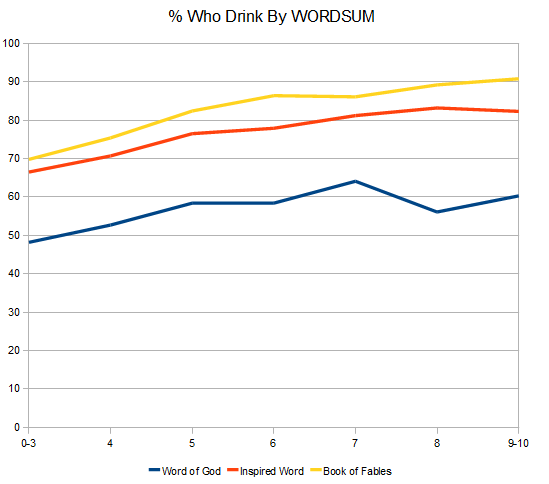 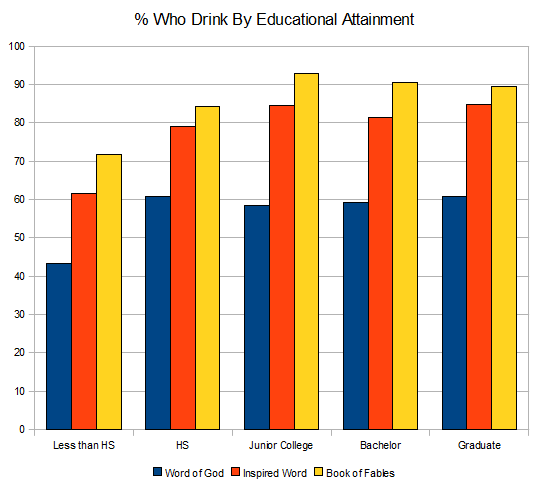 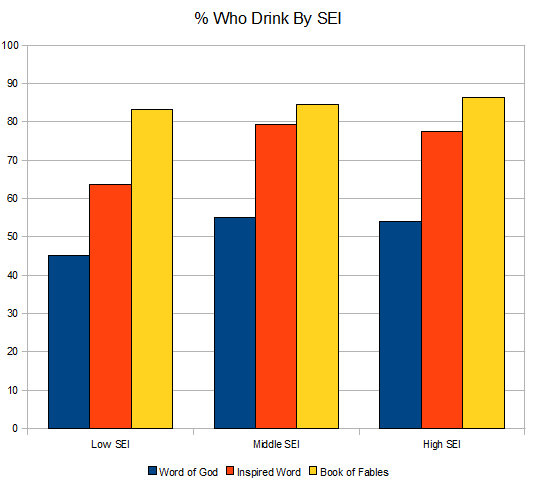 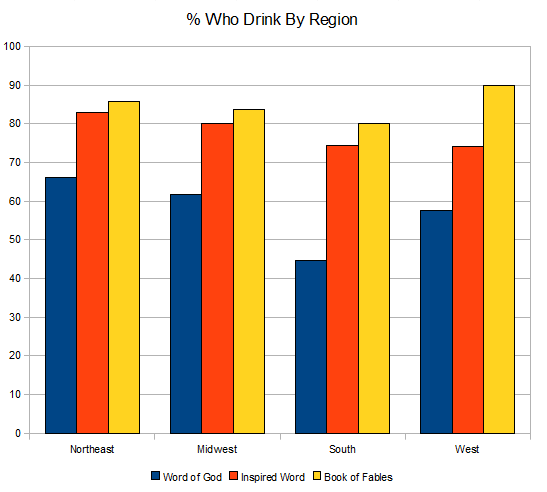 As for the title, I don't really get it. Does the Bible really place a ban on alcohol? I thought on the contrary, even taking into account Noah's lapse into drunkenness. Instead I'm pointing here to the importance of cultural evolution in shaping norms. You can't just necessarily take a Fundamentalist Christian who claims that the Bible is the Word of God, and therefore to be followed, at his word, so to speak.* I'm sure that some of the books that John Emerson highlighted below will explain the regional variations, though most are probably aware of the nationwide temperance movements which swept the United States in the 19th century, with the locus of energy being amongst those who we would later term Evangelical Protestants. * Conservative American Christians like to refer to a "Biblically based society." But really their model of society isn't that Biblically based because the Bible's explicit references are to an early Iron Age culture!