The Best Things in Life Can Be Pricey

For those of you who had better things to do than read blogs over the holidays, you missed out on the story everyone was linking to: this ten-part expose of the Noka chocolate company. It was a well-done piece, by someone who really knows his chocolate. Apparently there is an important distinction between "chocolate makers" and "chocolatiers." The former actually pick the cacao beans and turn them into chocolate, while the latter will buy basic chocolate ("couverture") from someone else and turn it into truffles or into whatever other form you prefer your dark sinful goodness. A pretty good system, overall; no shame in representing either half of the pipeline, although many manufacturers do serve both functions. Noka is a chocolatier -- one of the most expensive in the world. Hundreds of dollars per pound, minimum. The problem is that Noka pretends to make their own chocolate from scratch, even though they don't. They don't quite come right out and lie, but they shamelessly weasel around the truth, trying to give the impression that they're out there picking beans themselves. Unlike other chocolatiers, who are perfectly happy to reveal who is providing their raw chocolate, Noka keeps it a closely-guarded secret. But there aren't that many chocolate makers in the world, and Noka does make a long list of claims about its chocolate -- enough, as it turns out, to uniquely pin down who their supplier is! It's a tiny French company named Bonnat. Apparently, Noka doesn't even do a very artful job at turning their couverture into delectable truffles; they just melt it down and squeeze it into different shapes. And then sell it at a markup of anywhere from 1,000% to more than 6,000%. But you do get a pretty sweet stainless-steel box, if you go for the more expensive stuff. 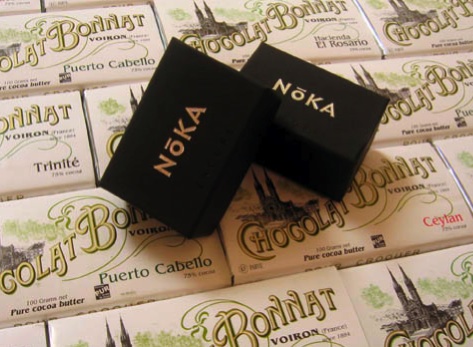 All in all, a nice bit of investigative reporting, and a pretty damning indictment of Noka's spin machine. But I was frustrated by a couple of aspects of the expose. Most obviously, with all of the elaborate effort that the author (credited only as "Scott") went to test and characterize Noka's chocolate, at no time (apparently) did he directly address the most important question -- how good does it taste? The impression is given that it can't possibly taste any different from the basic chocolate one could purchase directly from Bonnat, and here and there a disparaging comment about Noka's presentation is thrown in. But really, the entire point is how it tastes, no? I'm ready to buy the argument that it can't possibly live up to the hype, but I'd like to see that hypothesis explictly tested, with a blind taste test or some such thing. The other issue is more subtle, and almost certainly unintentional on the part of the author, who is clearly a chocophile. Unavoidably, by revealing the pretense behind a fancy-schmancy chocolate operation, the expose will confirm the suspicions of those who think that the whole concept of boutique chocolate is a scam, targeted at yuppies with more money than sense. Or any boutique food product, really. There are people out there -- I won't name names -- who harbor a lingering suspicion that anything more upscale than a good Hershey's chocolate bar is just an exercise in name recognition, totally divorced from considerations of quality. And that kind of talk makes my sensitive elitist-snob blood boil. Not that they're always wrong. One area in which quality definitely matters, I think we can all agree, is fine single-malt Scotch whisky. My own introduction to the pleasures of good whisky came, at all places, at a cosmology conference. It was in Britain (of course), and as an evening's entertainment the conference hosted a whisky tasting. It was presided over by a gentleman from J&B, who guided us through sips of several different single malts. Even to my untutored palate, the differences were unmistakable, and I was hooked. But the J&B guy, speaking in a charming Scottish accent, told a revealing anecdote: at one point they had a specific blend being sold only in Japan, which was suffering from disappointing sales. So they changed the name, slapped a different label on the same whisky, and tripled the price. Sales skyrocketed. Sometimes it really is about the cachet. Other times, it's not. Which I will proceed to rigorously prove by means of a counter-anecdote. I was having dinner with a friend at a fancy restaurant, the Ritz Carlton Dining Room in Chicago. She ordered the wine, keeping its identity a surprise by asking for it by the number on the wine list rather than by name. The bottle was brought to us by a different server, who offered it to me for tasting and inspection (being that I was the guy, naturally). This wine was -- amazing. Words fail me. Robust and spicy and deep, with a profound elongated finish, but at the same time subtle and multi-layered, not merely an overly-alcoholic novelty trick. We both agreed it was the best wine we had ever tasted. So we were enjoying the wine, when she proudly says "I knew you'd love this Barolo." To which I replied, "What are you talking about? This is a California Cabernet." Which claim was revealed, by inspection, to be true. And which, rather than causing some minor bemusement, filled us with fear. Obviously we had the wrong bottle, but had we made a mistake in ordering by number? This was a fancy place -- she was trying to order a $100 bottle of wine, but there were plenty on the wine list that broke the $1000 barrier. And we didn't really want to spend the rest of the evening washing dishes. So, with some trepidation, we asked to peek at the wine list again. Turns out that the bottle we were drinking came in at $300 -- not what we had meant to spend, but not completely obscene. And we hadn't, in fact, ordered the wrong number; there was a mistake on the printed wine list, and two completely different bottles had the same number. Fortunately, this being a classy place, the wait staff was horrified that we hadn't received what we had ordered, and offered to replace it (we declined), and wouldn't think of charging us the more expensive price. But the relevant point here is: paying a lot of money really does buy you quality, sometimes. This was a pretty good blind experiment, since we had no idea what we were drinking. I've had a few $100 bottles of wine in my day (not too many -- I don't move in those circles), and this was unmistakably better. Now, we can argue whether the increase of quality as a function of price is really linear, or something closer to logarithmic. But don't you dare start arguing that there's some non-outlandish threshold above which everything tastes just as good, no matter how much you pay. Sometimes, if you want the truly good stuff, you have to fork it over. Now go out there and indulge in some good chocolate! What are you waiting for?