Should you opt for ceramic, cast iron, nonstick, or something else? Here's a guide to choosing pots and pans that will get the job done — and clear up concerns you might have about what they're made of. 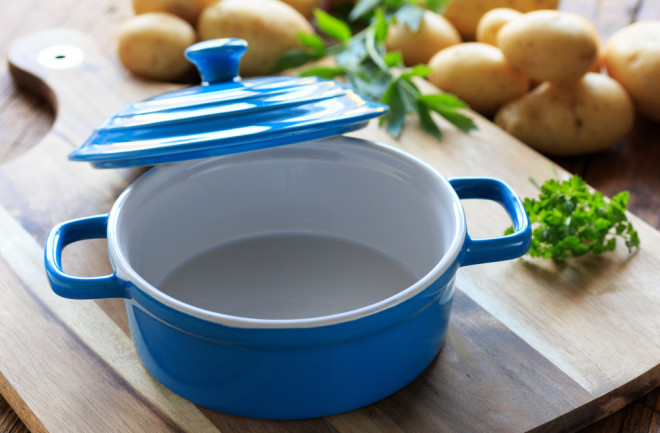 In the midst of an ongoing apocalyptic reality that never seems to end, what’s in your pots and pans might be the last thing on your mind. But now, more than ever, it might be time to take stock of what’s in the kitchen and make sure it’s safe to cook on.

In recent months, there’s been an unprecedented return to the home kitchen. In a survey of 1,000 people by the International Food Information Council, half said they were more likely to cook a meal from scratch than they had been at the beginning of the pandemic. Thirty percent said they tried new recipes.

At the same time, a growing number of consumers are seeking cookware that will get the job done and limit their exposure to humanmade industrial chemicals. But how do the different options on store shelves stack up in terms of health, environmental impact, durability, and ease of use?

Discover asked the experts for their advice on picking pots and pans that can cook up delicious food and not add unintended, toxic ingredients to your dish: Suzanne Fenton, a reproductive endocrinologist at the National Institutes of Environmental Health Sciences (NIEHS); J. Kenji López-Alt, a chef, author of the cooking science book The Food Lab, and chief culinary consultant for Serious Eats; and Olga Naidenko, vice president of science investigations at the Environmental Working Group (EWG), a nonprofit and nonpartisan advocacy organization.

Nonstick is the cooking surface that is probably the most likely to sound alarm bells in consumers’ minds. This kind of coating, known commercially as Teflon, lines metal pans with a tough, synthetic resin to create a slippery surface. Its chemical name is polytetrafluoroethylene, or PTFE. Historically, it was made using PFOAs, or perfluorooctanoic acids. PFOAs are part of a group of stubborn chemicals that have been linked with health risks like thyroid problems, possible hormone disruption, kidney disease and immune system issues. The FDA worked with companies to phase out the use of PFOAs and other similar chemicals in food-contact applications by 2016. However, similar to in the cosmetics industry, manufacturers don’t have to disclose every ingredient they use in their coatings.

PTFE coating, or Teflon, isn’t necessarily dangerous if ingested by accident from scratching or chipping, according to Fenton and Naidenko, though its nonstick properties will weaken if scratched. What’s more worrisome is when a PTFE nonstick pan is used at a high heat — say, searing a steak or leaving a burner on by accident. Molecular bonds in the coating begin to break down at around 500 degrees, according to a presentation on home chemical coatings by Michael Michalczyk, a chemical consultant. Nonstick coatings can then release dangerous fumes that irritate the respiratory system.

According to Naidenko, PTFE coating today is essentially the same as the old versions — just made with much smaller amounts of PFOAs. But she adds that “the risk of it overheating, and harming our lungs — that risk stays. Those pans should not be overheated [during] their lifetime — that would be a concern.”

Both Naidenko and Fenton noted that the health dangers posed by Teflon cookware is a small risk compared to the environmental contamination associated with manufacturing and disposing of these products. According to the EWG, per- and polyfluoroalkyl substances (or PFAS), a group of chemicals that PFOAs belong to, can be found in the drinking water of many U.S. cities. PFAS enter the environment from Teflon products breaking down in landfills, and from the production of plastic wrappings, water-repellant items, and things like military firefighting foam. Although the Environmental Protection Agency says this group of chemicals can be incinerated as a way to keep them from other waste streams, Naikendo said that this can cause an air pollution problem for communities where incineration occurs.

López-Alt says he rarely uses nonstick cookware, but when he does it’s for low-heat tasks like cooking an omelet, where nonstick has a big advantage.

Some of the most popular new cookware crowding Instagram feeds and online stores are ceramic. These pots and pans boast labels like “PTFE and PFOA-free” or “non-toxic,” and “healthy.” But because they’re a relatively new nonstick alternative, our experts say not as much is known about them in terms of the long-term effects on health and the environment. Pans marketed as “nonstick ceramic” are not made of pottery or clay, however. Pure ceramic cookware that’s closer to pottery does exist, but it’s less common.

Instead, many products labeled as ceramic include a metal core with a chemically-combined coating that is sprayed on. There’s a good chance a ceramic pan has a coating containing silica — the same mineral that sand and silicone are made out of — and various other substances. The viral Always Pan, along with other popular options in the cookware aisle, are made using sol-gel — a wet-chemical process that forms nanoparticles into solid materials and dehydrates them into ceramic or glasslike surfaces. But a downside to ceramic nonstick is that the coating doesn’t last as long as PTFE-based pans. According to Naidenko, because it’s hard to know what the exact contents of these coatings are, “even if one has a pan that has not a lot of PTFE in it, they still should not overheat something” in a ceramic pan.

It might be time to pay more attention to that friend who won’t stop talking about seasoning their cast-iron skillet. That’s because cast iron cookware is one of the most reliable and time-honored materials that can grace your kitchen. Cast iron cookware is quite heavy — which for some might be enough reason to pass on it. But because of its weight and density, cast iron can retain heat much longer than other metals like aluminum. However, it doesn’t distribute its heat very evenly, according to López-Alt.

From a safety perspective, what you see is what you get: iron alloyed with varying amounts of carbon and silicon, forged into a shape. “Seasoning” a cast iron pan is the process of adding oil or fat and heating the pan. This creates a reaction with the oil and the iron that forms a somewhat nonstick black layer — a polymer, López-Alt says, which gets built up as it's used. The surface stands up well to most kinds of cooking, and prevents sticking, although acids like tomato and vinegar can break down the coating that forms.

Contrary to popular belief, cast iron can be washed with soap without damaging the surface — but leaving cast iron wet with water can cause it to rust. According to López-Alt, “The whole idea that you can't clean cast iron with soap is just a complete myth that no longer applies,” he says, noting that older soaps containing lye did affect cast iron, but not modern soaps. “I think people just sort of baby their cast iron much more than they have to.” Small amounts of iron do, in fact, end up in food, but for people prone to iron deficiency, this can actually be a benefit.

Steel cookware is some of the most common and popular cookware around because of its durability and how well it stores heat energy compared to other metals — a little less than cast iron or copper, but better than others, says López-Alt. Stainless steel usually has more added materials, like chromium or nickel, and a conductive core like aluminum or copper, while carbon steel is just steel.

Carbon steel, which is common for woks and crêpe pans, is more similar to cast iron: It has some nonstick properties and is very durable and heat-resistant, but can also rust. Stainless steel can be put in a dishwasher, unlike carbon steel, and it won’t react with acids as much. But overall, both are scratch-resistant and safe surfaces to cook on. Fenton favors stainless steel pans, while Lopez-Alt says he prefers his carbon steel cookware, which should be seasoned like cast iron. “My real advice would be to learn how to use carbon steel because it's the best,” he says.

Aluminum might comprise a whole pan, be mixed with other metals, or make up a layer within the pan. It’s less dense than metals like steel or iron, so it doesn’t retain heat very well. This means that it can cool down quickly, but it does conduct — or transfer — heat very well, making it a popular addition to pans made with other metals. According to López-Alt, chefs in restaurants often use aluminum pans because their industrial burners can maintain stronger heat than a typical home kitchen stove.

Anodization gives aluminum a very hard, non-corrosive surface. Anodized aluminum is made with an electrolytic process that makes it much harder and smooth — the one downside is that you can’t put these kinds of pans in the dishwasher or you risk ruining the surface, according to the book Things Cooks Love, by Marie Simmons. While there has been inconclusive research on links between aluminum and Alzheimer's, aluminum cookware is currently not considered to be a health risk. The CDC says that while aluminum cookware can transfer aluminum into foods, especially acidic ones, “aluminum levels found in processed foods and foods cooked in aluminum pots are generally considered to be safe.”

Copper is favored by professional chefs for its superior conductivity, which means it heats up quickly and evenly. But copper should not come into contact with food on its own, because it can react with acidic ingredients like wine, fruit juice, or vinegar and leach into food, according to the FDA’s 2017 Food Code.

“While copper is very good because of its heating properties, too much copper is not good for the body, especially for children,” says Naidenko. “It can even cause things like diarrhea and nausea.” Many copper pots or pans are lined with a metal like tin or stainless steel for this reason.

Tin can wear more easily than steel, so if you have an old tin-lined copper pot, or if you spot one at a yard sale for a good price, Naidenko said it’s a good idea to look for scratches. Copper also can be quite expensive and can oxidize in damp air, leaving a green discoloration.

Takeaways From the Experts

Each type of cookware comes with some advantages and drawbacks. A general rule of thumb is to choose cookware that works well for your needs, and steer clear of products if the materials aren’t clearly defined. You can’t go wrong with basic heavy cookware that is durable and long-lasting. But note that even nonstick cookware has its place in modern kitchens and can be reserved for preparing delicate dishes that are prone to sticking.

If you have the means and must replace a pot or pan, consider cookware that will stand the test of time. And know that even if the materials are considered safe for humans at home, they could become environmental hazards when they break down in landfills at the end of their life. As Fenton said, “If you're going to invest in cookware, you might as well go for something that's going to be a little bit safer and last you a little bit longer.” And no matter which type of pan you choose, the safest pan for your health may come down to how you wield it in the kitchen. “I think pretty much all the cookware out there right now is pretty safe, as long as you take care of it,” she says.