The arcs of evolutionary genetics always cross back

If you have more than a marginal interest in evolutionary biology you will no doubt have stumbled upon the conundrum of sex & sexes. Matt Ridley's most prominent work, The Red Queen: Sex and the Evolution of Human Nature, covered both the theoretical framework and applied implications of the subject. Ridley leaned heavily upon William D. Hamilton's scientific work, which extended upon Leigh Van Valen's concept of the book's titular Red Queen. The complex interplay between pathogens & multicelluar organisms across the eons is a topic of such breadth and depth that a substantial proportion of the territory in evolutionary biology is still devoted to it, and how sex may relate this dance. Hamilton spent the second half of his career focusing on just this question, outlined in Narrow Roads of Gene Land, volume 2 of his collected papers.* The question of sex begins with a simple self-evident curiosity: why not cloning? Assume that you are a creature who can be expected in any given generation to have two offspring reach maturity. Imagine two populations, one clonal and purely female and another sexual with females and males. In the later case let us assume a 50:50 sex ratio (this does not always occur, but often does for a peculiar evolutionary genetic reason). All things equal the former population should be able to produce twice as many offspring for subsequent generations. Males are a waste of a body, a "vehicle" as Richard Dawkins would say. Instead of producing offspring the bodies of males serve as halfway houses for genes. Consider the circumscribed lives of drones among the hymenoptera. An answer may be that if men are a plague upon women, they may also offer women a salvation from plagues. The evolutionary psychologist Geoffrey Miller constructs a speculative illustration of this principle in The Mating Mind, while the behavioral ecologist Bobbi S. Low reports on more concrete cases in Why Sex Matters. Why patriarchy? One must always engage the pathogens which inevitability threaten to turn into the bane of a multicellular organism's existence. These are big questions, but fleshing out the details can only be done case by case. Though there are some ethnographic and biological anthropological research programs attempting to tease apart the nature of the relationship between disease load and sexual behavior, there are obvious limits to this sort of work. Humans are big slow breeding organisms constrained by ethical considerations. At the other extreme are those who play with parameters in silico (much of Hamilton's later theorizing was in simulation and not analysis). To split the difference one might look to fast reproducing model organisms, attempting to draw general inferences from specific results. That is what a letter to Nature attempts to do in relation to sex, or more accurately sex with self or non-self, Mutation load and rapid adaptation favour outcrossing over self-fertilization:

The tendency of organisms to reproduce by cross-fertilization despite numerous disadvantages relative to self-fertilization is one of the oldest puzzles in evolutionary biology. For many species, the primary obstacle to the evolution of outcrossing is the cost of production of males, individuals that do not directly contribute offspring and thus diminish the long-term reproductive output of a lineage. Self-fertilizing ('selfing') organisms do not incur the cost of males and therefore should possess at least a twofold numerical advantage over most outcrossing organisms. Two competing explanations for the widespread prevalence of outcrossing in nature despite this inherent disadvantage are the avoidance of inbreeding depression generated by selfing and the ability of outcrossing populations to adapt more rapidly to environmental change. Here we show that outcrossing is favoured in populations of Caenorhabditis elegans subject to experimental evolution both under conditions of increased mutation rate and during adaptation to a novel environment. In general, fitness increased with increasing rates of outcrossing. Thus, each of the standard explanations for the maintenance of outcrossing are correct, and it is likely that outcrossing is the predominant mode of reproduction in most species because it is favoured under ecological conditions that are ubiquitous in natural environments.

The fact that obligate outcrossing yielded a much larger response than natural outcrossing rates is something of a surprise, because it is thought that moderate amounts of outcrossing are sufficient to escape the problems associated with obligate selfing. One additional feature of this system that has not been previously considered, however, is that an increase in the frequency of males within a population also increases the opportunity for sexual selection, which has been shown to reduce the overall genetic load within a population. Males therefore play multiple roles within these populations, both for enhancing genetic exchange across generations and increasing the efficacy of natural selection within generations. Mutation, changing environmental conditions, and pathogens are nearly ubiquitous selective pressures for many organisms, which probably explains outcrossing's relative prevalence in nature.

As I said, the the plague of males is simply the consequence of the plague of pathogens. Figure 1 illustrates their results concisely. I have reformatted as usual to 500 pixels. 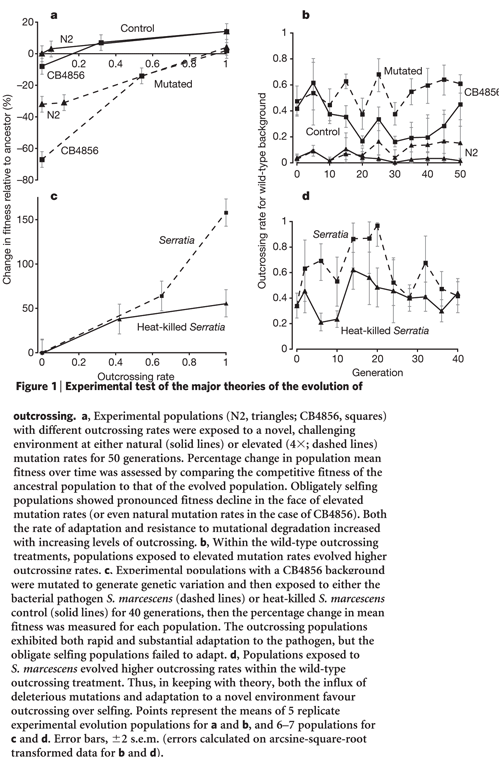 The above experiment uses the outcrossing:selfing dichotomy to serve as an analogy to sexual:asexual reproductive strategies. More abstractly one could consider both forms of the relation long term vs. short term. All things equal organisms which lack males and have all individuals dedicated to producing offspring (as opposed to an extant population of fertilizers) has sexual species outgunned. Similarly, selfers have all the means of reproduction at hand, and don't need to worry about mixing up their own genetic material with that of a stranger if they simply rearrange what they have on hand. What sexual species which have males bring to the table is flexibility under duress. If you are a multicelluar organism you're likely handicapped against pathogens who are out to get you because they breed fast and can respond to your defenses. How to level the playing field? Sex may be one way; the constant reshuffling of defenses by mixing & matching genes between individuals keeps the pathogens guessing, who are after all asexual (though horizontal gene transfer thickens the plot considerably these days). Males may incur the cost of decreased short term productivity, but a species with males is made to last, at least if that species reproduces rather slow in relation to microorganisms with whom it is presumably in a biological arms race. To use an example with contemporary relevance, clonal lineages are undercapitalized when market conditions shift and overleveraged and stuck with only a few viable strategies. Sex may not offer up the same short term yields, but it is a diversified portfolio designed to weather, and even benefit from, downturns and market volatility. Until a great selective moderation, males are here to stay. Citation: Mutation load and rapid adaptation favour outcrossing over self-fertilization, Nature, doi:10.1038/nature08496 * Of William D. Hamilton's the three volumes of collections of papers the second is the most interesting because he died before his biographical introductions could be reedited. They are therefore voluminous, and quite often shockingly frank and unguarded. Volume 3 has biographical introductions written by friends and collaborators. Volume 1 is slimmer, and evinces scientific conventionality in both substance & style. ** If these worms intrigue you, I recommend Andrew Brown's In the Beginning Was the Worm: Finding the Secrets of Life in a Tiny Hermaphrodite .