The antifungal powers of cockroach poop. 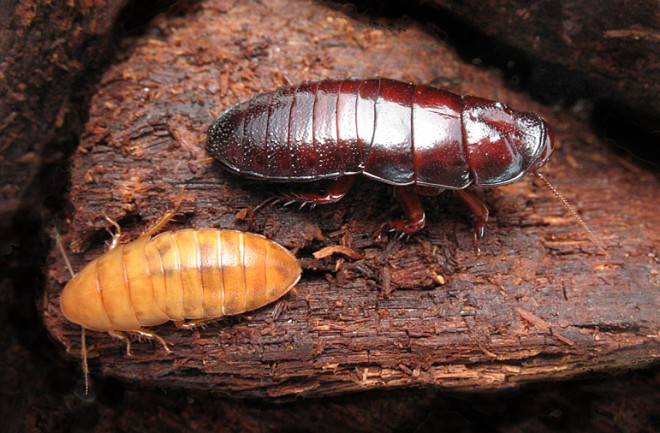 Image: David R. Maddison"Don't sh*t where you sleep" is one aphorism that probably will never catch on with wood cockroaches. That's because they are constantly pooping in their nests, which is pretty icky. But before you add this to your list of reasons to hate these harmless little beetles, listen up. It turns out that wood cockroach poop is really good at killing fungus, and pooping in their nest likely helps keep these wee beasties healthy (albeit covered in their own poop!) Who's icky now? Nest sanitation through defecation: antifungal properties of wood cockroach feces. "The wood cockroach Cryptocercus punctulatus nests as family units inside decayed wood, a substrate known for its high microbial load. We tested the hypothesis that defecation within their nests, a common occurrence in this species, reduces the probability of fungal development. Conidia of the entomopathogenic fungus, Metarhizium anisopliae, were incubated with crushed feces and subsequently plated on potato dextrose agar. Relative to controls, the viability of fungal conidia was significantly reduced following incubation with feces and was negatively correlated with incubation time. Although the cockroach's hindgut contained abundant β-1,3-glucanase activity, its feces had no detectable enzymatic function. Hence, these enzymes are unlikely the source of the fungistasis. Instead, the antifungal compound(s) of the feces involved heat-sensitive factor(s) of potential microbial origin. When feces were boiled or when they were subjected to ultraviolet radiation and subsequently incubated with conidia, viability was "rescued" and germination rates were similar to those of controls. Filtration experiments indicate that the fungistatic activity of feces results from chemical interference. Because Cryptocercidae cockroaches have been considered appropriate models to make inferences about the factors fostering the evolution of termite sociality, we suggest that nesting in microbe-rich environments likely selected for the coupling of intranest defecation and feces fungistasis in the common ancestor of wood cockroaches and termites. This might in turn have served as a preadaptation that prevented mycosis as these phylogenetically related taxa diverged and evolved respectively into subsocial and eusocial organizations." Related content: NCBI ROFL: Jeez people, enough with the cockroaches in your colons already. NCBI ROFL: A micro creeping robot for colonoscopy based on the earthworm. NCBI ROFL: Rambling roaches require receivers to run 'round roadblocks.