The adventure of the Cohen Modal Haplotype

The past 10 years have seen a lot of ups & downs in the Cohen Modal Haplotype (CMH) hypothesis, which suggests some veracity to the Biblical narrative whereby the priestly caste status of the Jewish people is passed down patrilineally from Aaron, the brother of Moses. But could there be multiple Aarons? Possibly. Extended Y chromosome haplotypes resolve multiple and unique lineages of the Jewish priesthood:

It has been known for over a decade that a majority of men who self report as members of the Jewish priesthood (Cohanim) carry a characteristic Y chromosome haplotype termed the Cohen Modal Haplotype (CMH). The CMH has since been used to trace putative Jewish ancestral origins of various populations. However, the limited number of binary and STR Y chromosome markers used previously did not provide the phylogenetic resolution needed to infer the number of independent paternal lineages that are encompassed within the Cohanim or their coalescence times. Accordingly, we have genotyped 75 binary markers and 12 Y-STRs in a sample of 215 Cohanim from diverse Jewish communities, 1,575 Jewish men from across the range of the Jewish Diaspora, and 2,099 non-Jewish men from the Near East, Europe, Central Asia, and India. While Cohanim from diverse backgrounds carry a total of 21 Y chromosome haplogroups, 5 haplogroups account for 79.5% of Cohanim Y chromosomes. The most frequent Cohanim lineage (46.1%) is marked by the recently reported P58 T->C mutation, which is prevalent in the Near East. Based on genotypes at 12 Y-STRs, we identify an extended CMH on the J-P58* background that predominates in both Ashkenazi and non-Ashkenazi Cohanim and is remarkably absent in non-Jews. The estimated divergence time of this lineage based on 17 STRs is 3,190 +/- 1,090 years. Notably, the second most frequent Cohanim lineage (J-M410*, 14.4%) contains an extended modal haplotype that is also limited to Ashkenazi and non-Ashkenazi Cohanim and is estimated to be 4.2 +/- 1.3 ky old. These results support the hypothesis of a common origin of the CMH in the Near East well before the dispersion of the Jewish people into separate communities, and indicate that the majority of contemporary Jewish priests descend from a limited number of paternal lineages.

The point about a number of paternal lineages is a critical part of this paper. Here's a figure which shows the proportions of Y haplogroups among Jewish populations (the use of the term "Israelite" for a contemporary nationality is novel to me, as they mean what I would have thought would be "Israeli"): 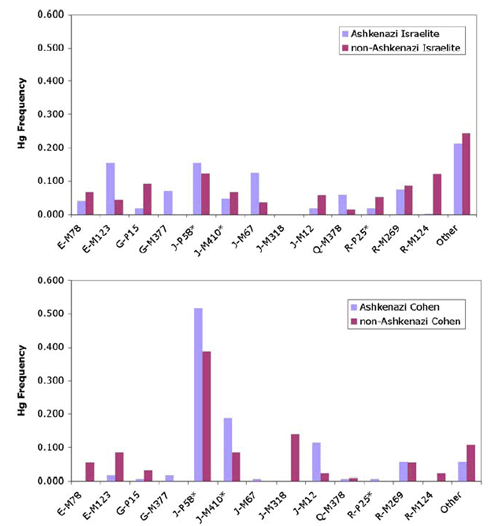 The prevalence of haplogroup J is a confirmation of the fact that Jewish male lineages are predominantly Middle Eastern. The concentration of the Cohen among only a few of these haplogroups is also striking, especially the fact that that bias spans both Ashkenazi (European) and non-Ashkenazi Jews. That suggests that a few male lineages monopolized the status of being a Cohen, which one would expect from the cultural practice (whereby sons inherit the status from their fathers), and, that those lineages predate the expansion of Jews and their subsequent diversification in the Diaspora. The following table gives a sense of the time depth of these lineages: 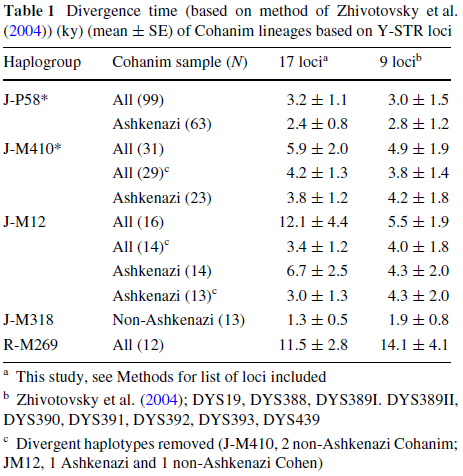 The numbers above are thousands of years in the past, specifically the points at which the lineages within a haplogroup coalesce to a common ancestor. Of course if these are the descendants of Aaron why exactly are their several haplogroups around? One hypothesis could be that J-P58* is Aaronic, but that other lineages have "introgressed" through "misattributed paternity." The problem with such a model is that you should then see a modal haplogroup, and a a host of of much lower frequency unrelated haplogroups. As it is, some of the haplogroups, such as J-M410*, are at very high frequencies. If introgression occurred, it occurred early enough that we can think of the Cohens as a mix of lineages among the early pre-Diaspora priestly caste. But these authors ran some simulations which suggested this may explanation may need some nuance. They contend:

Thus, there would be a reasonably high probability that more than a single Cohen haplogroup could have survived in the Ashkenazi population since the initial founding of the priesthood »3,000 years ago...if we would be willing to accept an initial founding population size of >50 priests. However, our simulation results also suggest that it is highly unlikely that as many haplogroups as we actually observe...would persist under this simple model. Another model that deserves consideration is a metapopulation...in which semi-isolated communities maintain multiple Cohen lineages, each with a certain probability of extinction and replacement. In this model, multiple Cohanim lineages would then persist in the entire population, and new lineages would be expected to accrue among Cohanim over time. The presence of several founding lineages among the Cohanim of this survey--both shared between or specific to the Ashkenazi and non-Ashkenazi communities, as well as highly variable frequencies of these lineages among sub-populations within Ashkenazi and non-Ashkenazi communities...may lend support to a metapopulation model. Mutation alone does not provide an explanation for the multiplicity of Cohanim haplogroups, because the ages of most of these haplogroups predate the foundation of the Jewish people.

The logic of this is simple. Within one population over time most lineages will go extinct through random genetic drift, so that the frequency of one lineage will eventually fix at nearly 100% (this is one where is only one "mitochondrial Eve," the other lineages slowly disappeared). Within several distinct populations which may have some gene flow the dynamics are more complex, as different independent random walks are liable to render different lineages extinct (though without gene flow fixation would occur more quickly). Finally, here's a map of J-P58*'s frequencies among Middle Eastern populations: 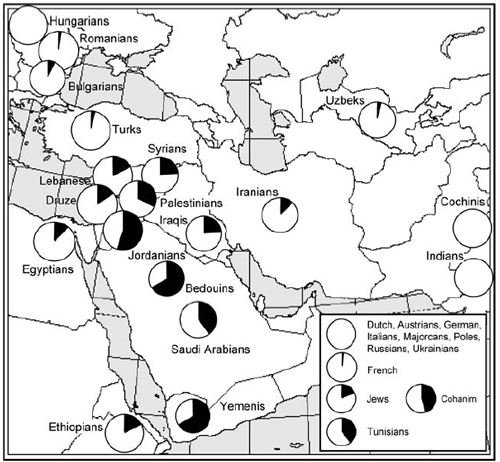