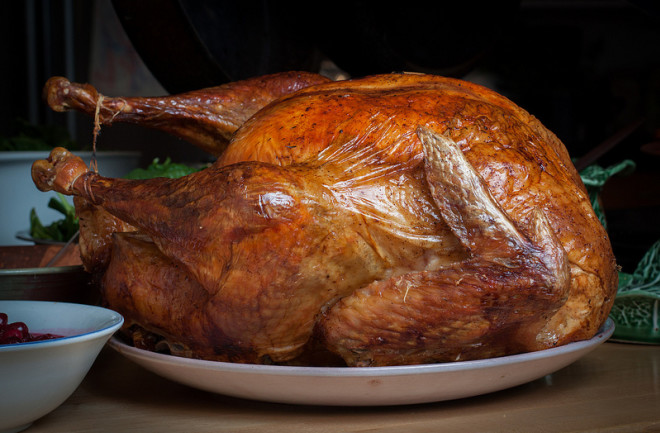 Turkey is the star of the most famous dinner of the year; it is also the victim of a myth that persists every holiday season. At the end of Thanksgiving dinner, there's a good chance that someone will mention that a molecule called tryptophan is the culprit for the post-feast drowsiness.

The science seems sound enough. Turkey contains tryptophan, which is a precursor for serotonin, a neurotransmitter. In turn, serotonin produces melatonin, a hormone that helps regulate sleep. This myth perpetuates, like many others, because it is based on a huge oversimplification of the truth. On the most fundamental level, tryptophan is an essential amino acid required to make many different proteins in the body. Our bodies can't produce tryptophan, so we have to get it from the foods we eat.

Considering amino acids are used to make proteins, we get them by consuming other proteins such as meats, poultry, eggs, dairy, rice, and beans. Chemically, tryptophan is the same whether it's in a test tube or in our bloodstream, meaning there's really nothing special about the tryptophan found in turkey versus other protein sources, like chicken. Turkey actually contains less tryptophan per gram than chicken, and half as much as in soybeans [1], but would anyone ever blame a tryptophan-induced food coma on a Thanksgiving chicken or tofurkey? Tryptophan can directly cause drowsiness—if taken in pill form on an empty stomach [2]. Before tryptophan can be converted to serotonin, it must first cross the blood-brain barrier to enter the brain.

This would be simple enough if tryptophan was the only amino acid capable of crossing the blood-brain barrier. However, after a meal―especially a high-protein meal like a turkey dinner―there will be many different amino acids floating around the bloodstream, many of which can also enter the brain. Despite this barrage at the gates, the brain can only take up a limited amount of amino acids. As tryptophan makes up only a small fraction of all the amino acids we consume, the other amino acids directly compete with tryptophan to cross the blood-brain barrier, ultimately decreasing tryptophan’s chances of entering the brain. Even if you stuffed yourself on nothing but tofurkey, only small amounts of tryptophan would ever enter the brain to make you sleepy.

The culprits behind the Thanksgiving dinner food coma are thus largely the high-carbohydrate dishes (and alcoholic beverages) surrounding the turkey: potatoes, yams, pies, bread, and stuffing. Eating carbohydrate-rich meals stimulates the production and release of insulin into the bloodstream [3]. Insulin then signals the uptake of amino acids into the muscles.

Unlike most amino acids, tryptophan has a rather large and bulky structure that prevents it from entering muscles, so it is left behind in the bloodstream. With fewer of the other amino acids in the blood, tryptophan has less competition and is more likely to cross the blood-brain barrier, where it can be converted into serotonin and melatonin, the brain chemicals attributed to happiness and sleepiness [4]. At this point you might be thinking, "So turkey does make you sleepy! It just needs help from carbs!" Yes, but on that level, Thanksgiving dinner wouldn’t be any different from, say, a bacon and biscuits binge, or any other high-protein, high-carb meal. And some of you might still adamantly insist, “I even eat turkey outside of Thanksgiving, and I still get super sleepy! It must be the turkey!”

But remember: the sugar pill works for a reason. Never underestimate the power of the mind. Still, don't let any of this stop you from enjoying this holiday and stuffing your face to your heart's content.

About the author: Alice Phung once had her sights set on an English degree, but eventually switched over to chemistry and hasn't looked back since. Read more by Alice Phung