Texture and Color of Sashimi 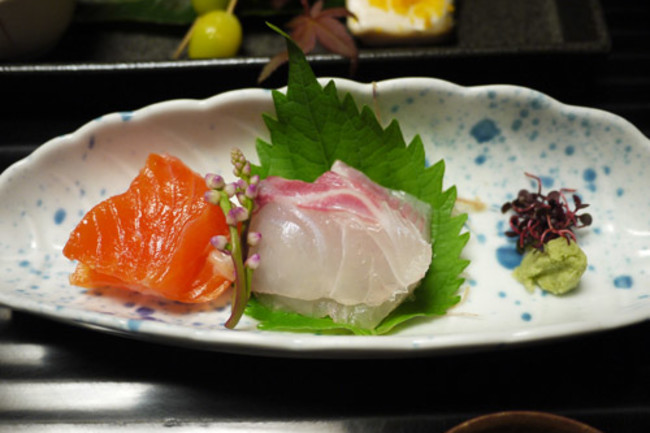 photo credits (sake puppets/flickr) Whether or not you like eating sashimi, such a fine specimen of fish is undeniably an incredibly beautiful food. The subtle flavors, delicate texture and vivid colors make sushi and sashimi such a unique eating experience. To whet your appetite for The Science of Sushi at UCLA, here are some bits of sashimi science we learned from Ole G. Mouritsen’s book, Sushi: Food for the Eye, the Body, and the Soul.Sashimi 刺身

Salmon and Tuna Sashimi - Photo Credits: (avlxyz/flickr) Why are fish muscles soft? If you used your finger to poke a raw filet of a bony fish like salmon or tuna, then tried this on meat from a terrestrial animal like beef or pork, you would notice that fish muscle is significantly softer than terrestrial meat. On a very fresh piece of fish, you could poke your finger through the muscle. From a basic understanding of meat texture, it seems strange that the meat of a fast-swimming predator is soft while the flesh of a slow-moving grazer is firm; typically the more an animal uses its muscles, the tougher its muscles. Yet fish tend to have the same density as the water in which they live, so they do not use their muscles to bear their own weight; fish need only to exert their muscles when they want to move. By contrast, terrestrial animals frequently use their muscles to counter gravity and remain upright. Fish simply have less work to do, and so their muscles do not develop the same chewy texture that land animals do. But not all fish have smooth and tender muscles; some species like shark have tougher meat. Why? Sharks’ bodies happen to have a specific gravity greater than the water they inhabit, so they must exert their muscles at all times to keep afloat, and thus their muscles more closely resemble a ruminant’s in firmness. Fresh is best About six hours after the fish is killed a phenomenon common to all animals, rigor mortis, sets in. During rigor mortis calcium ions of the proteins embedded in the muscle fibers are released, causing the muscle fibers to contract and become stiff. To delay rigor mortis for up to a few days, fish can be deep-frozen immediately after they are caught. Once the process of rigor mortis has run its course, the fish begins to decompose, the muscle fibers separate, and the connective tissue loosens. At this point it is ideal to consume the fish, as it is at its peak of softness and freshness. This type of sushi is called nojime, the type made from fish that are not kept alive after being caught. The opposite is ikijime sushi, prepared from fish with firmer muscles as they are kept alive until the last moment and prepared before rigor mortis can set in. A rainbow of fish

Orange, pink, red, white; there is remarkable variation in fish meat color. Photo Credit: Kake Pugh (kake/flickr) Orange and pink The muscles of wild salmon and sea trout are typically orange-pink in color. The origins of this distinct shade of salmon begins at the bottom of food chain, with plankton. These little organisms contain a pigment astaxanthin. It belongs to the family of pigments called carotenoids, which includes the pigment that makes carrots orange. Tiny crustaceans eat plankton, and thus ingest astaxanthin, whereupon it is bound to proteins called crustacyanins in the animals’ tough shell. While bound to these proteins, the pigment is blue-green or a dark red-brown. This will seem familiar if you have ever seen live crab or lobster. When a fish comes along and eats the crustacean, the crustacyanins are denatured and they release the pigment, allowing its own red-orange color to become visible. The color change that occurs upon cooking crustacean shells is caused by the same protein-denaturation and pigment-release process that occurs in fishes’ digestion systems. Red Fish Although the proteins that form the muscles themselves are colorless, a lot of fish meat is deep red, like tuna. These colored muscles are classified as slow muscles, as they take care of work that has to be carried out on an on-going basis, namely, continuous swimming. Since they require a continuous oxygen supply to produce energy, they contain myoglobin. Myoglobin is responsible for the transport of oxygen within muscle tissues. Each myoglobin molecule can bind one oxygen molecule to form oxy-myoglobin, which is bright red. White fish In contrast to slow muscles, fast muscles undertake smaller and more rapid movements like the slapping of fins and tail. These muscles do not contain myoglobin; instead they use the colorless starch glycogen to supply energy. No myoglobin means that these muscles stay colorless or white. Interested in learning more sushi science from the experts? UCLA Science & Food’s public lecture, The Science of Sushi, is on April 23^rd. In this lecture, Dr. Ole Mouritsen will illuminate the science underlying sashimi, nori, sushi rice, umami, and more. He will be joined by Chef Morihiro Onodera who will share his approach to sushi as well as an inside look into his partnership with a rice farm in Uruguay. References: