Tapeworm-Associated Epilepsy on the Rise

It was the work of the lunar god, a “disease of the moon,” thought the Mesopotamians. The Romans attributed it to demonic possession. Priests and peasants in the Middle Ages considered the “falling sickness” a contagious evil. Today our understanding of seizures and epilepsy rests not with lunar cycles or the supernatural, but with scientific insights into the developing brain and the pathologies of various diseases. We now know that there are over forty different disease processes that can cause the syndrome known as epilepsy, ranging from metabolic disorders to tumors, from trauma to congenital diseases. The leading causative agent of acquired epilepsy in the world, however, is an infectious one, a possession not by a pernicious and paranormal presence but by a parasite: the pork tapeworm, Taenia solium. 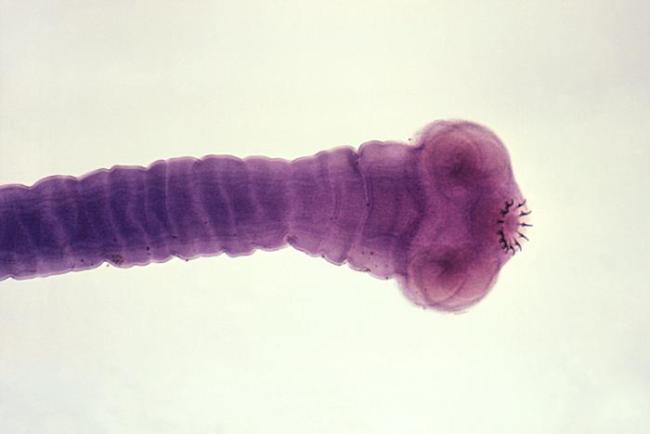 The pork tapeworm parasite, Taenia solium. Image: Dr. Mae Melvin, CDC. The pork tapeworm is a major public health problem throughout much of the world, with millions of people harboring an infection. In certain hotspots of Asia, sub-Saharan Africa, and Central and South America, infection with this parasite is responsible for anywhere from 25% to 40% of all cases of newly-diagnosed epilepsy (1). Transmission of Taenia solium relies on a complicated life cycle involving pigs and humans, and the worm requires certain lapses of hygiene and sanitation in order to thrive. Humans are infected through two distinct routes: through consumption of undercooked pork or through the fecal-oral route via the accidental ingestion of eggs. Those who eat poorly cooked or raw pork develop an infection known as taeniasis, harboring an adult tapeworm in their small intestine which churns out infective eggs in the feces that may go on to transmit the disease further. The infection can last for years and is generally asymptomatic. 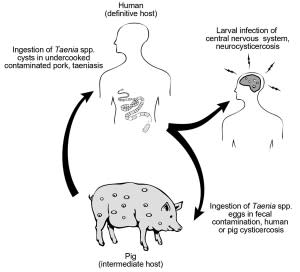 The life cycle of the pork tapeworm Taenia solium. Image: SE O'Neal and RH Flecker. Click for source. Accidental ingestion of the helminth’s eggs by either pigs or humans leads the parasite to adopt a quite different course of action altogether. Those infective eggs hatch larvae, the larvae pierce the intestinal wall, and these larvae mainline their way via the blood to the eyes and central nervous system. In these regions, the larvae cause local damage, destroying tissue and attracting the cells of the immune system, which can cause further havoc. Eventually the larvae encyst, encasing themselves in a protective capsule. For ocular infections, the cysts may float within the vitreous chamber of the eye, causing pain, blurry vision, retinal detachment and even blindness. In the brain and spinal cord, the embedded cysts cause neurocysticercosis and may result in headaches, seizures, meningitis, encephalitis, stroke, as well as profound cognitive and sensory defects. In the United States, local transmission of the parasite is thankfully rare, largely due to stringent federal requirements for animal farming and processing, not to mention high standards of sanitation and the infrastructure necessary to implement those standards. But cases of neurocysticercosis are on the rise, especially in the western and southern regions of the country. About a thousand new cases arise each year in the United States, largely due to the migration of infected carriers, and the CDC now considers neurocysticercosis an tropical disease of emerging public health significance (2). A report published this month in the CDC’s Emerging Infectious Diseases journal looked at hospitalization data from 2003 to 2012 and identified nearly 20,000 hospitalizations for neurocysticercosis (3). An analysis of that data found that 75% of all hospitalized patients were Hispanic, with the majority male and aged 20 to 44 years. 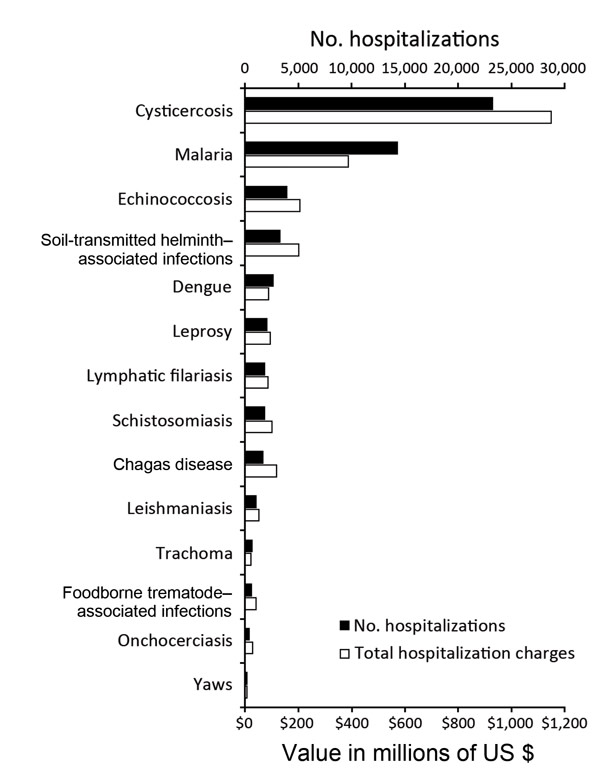 The frequency and total cost of hospitalizations in the USA during 2003–2012 for the major tropical diseases. Image: SE O’Neal and RH Flecker. Click for source. The total charges associated with hospitalization for neurocysticercosis over that time period total over $908 million, making it one of the most expensive tropical disease in the United States today, far surpassing the cost of imported cases of malaria, dengue, and Chagas disease. As the authors of this study note, “hospitalization stays [for neurocysticercosis] were prolonged and expensive, reflecting the complicated nature of acute disease management.” Medicare and Medicaid pay for 40% of those hospitalizations, making this exotic parasite an American public health burden. For the population of United States immigrants from affected regions, this parasite is a serious health problem, not to mention a costly one. And the incidence of this disease are likely to increase due to growing immigration from areas where infection with the Taenia solium parasite is relatively common. Neurocysticercosis in America is, in short, an expensive problem that is likely to get worse before it gets better. Previously on Body HorrorsOy Vey!: Pig Tapeworm in the Orthodox Jewish CommunityComing to America: Neglected Tropical Diseases Are Here (To Stay?)Resources For a great in-depth look at the long history of epilepsy, check out this free article from the journal Epilepsia. Watch out: Wikipedia has a great list of notable people throughout history that suffered from epilepsy that may get you stuck in an internet wormhole. For more information on the pork tapeworm infection, the CDC has you covered. References 1) E Naddaf et al. (2014) Neurocysticercosis in Wisconsin: 3 cases and a review of the literature. WMJ. 113(2): 74-8 2) WX Shandera et al (1994) Neurocysticercosis in Houston, Texas. A report of 112 cases. Medicine. 73(1): 37-52 3) SE O'Neal and RH Flecker (2015) Hospitalization frequency and charges for neurocysticercosis, United States, 2003-2012. Emerg Infect Dis. 21(6): 969-76.