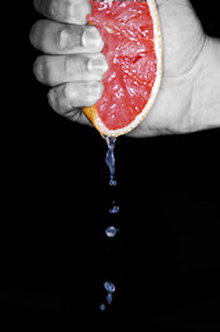 Don't take Viagra with grapefruit juice. Researchers have performed the first human-controlled study to show that when certain blood pressure, cancer, and antibiotic drugs are taken with fruit juices including grapefruit, orange, and apple, the drugs became “useless.” Canadian researchers found that only half the allergy drug fexofenadine was absorbed when volunteers drank the pill with juice. A chemical in grapefruit juice called narigin blocked a key molecule that carries the drugs from the small intestines to the bloodstream, and therefore prevented the drug from going to the right targets. In oranges, the chemical to blame for blocking drugs is hesperidin. The researchers are still trying to figure out what chemical in apple juice causes the decrease in absorption. “This is just the tip of the iceberg,” says David G. Bailey,a professor of clinical pharmacology at the University of Western Ontario. “I’m sure we’ll find more and more drugs that are affected this way.” If you really are craving juice, then just leave some time before you take the medicine and drink it. Just remember that it’s best to take meds with water anyway.