Sherlock Holmes is one of the most famous characters in English literature, revered by fans of mystery from Victorian London to the present day, where he is still celebrated for his keen eye, wealth of knowledge, and aptitude for deductive reasoning. Indeed, Holmes has grown in status from a protagonist in a magazine serial to a genuine pop culture icon; his adventures with Dr. Watson have been featured in fifty-odd short stories and four novels and over 220 films and television shows since his creation by the Scottish physician, ship’s surgeon, and author Sir Arthur Conan Doyle (1). 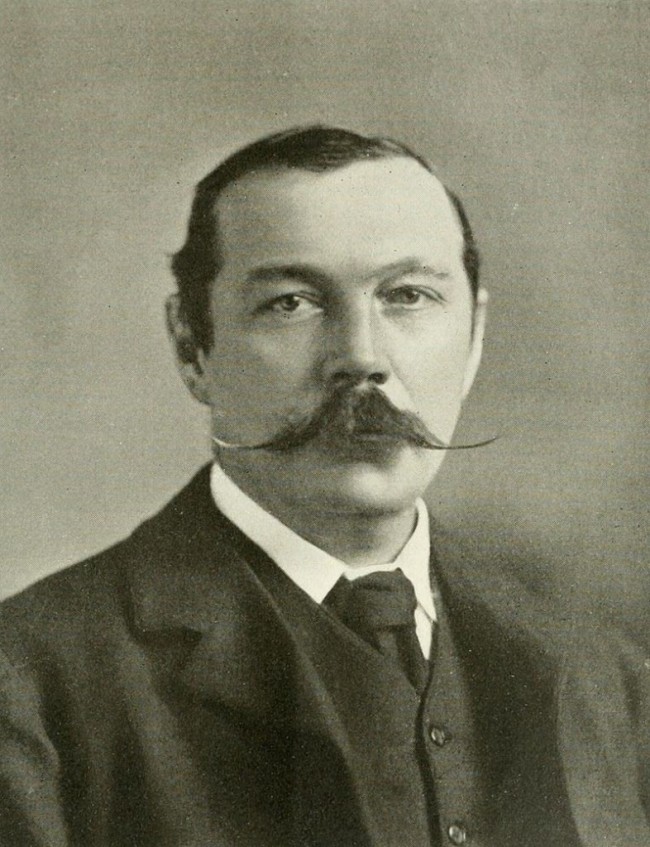 Arthur Conan Doyle at the turn of the twentieth century. Image: The Canadian Magazine. Click for source. Doyle lived during the Victorian era, from 1859 to 1930, and worked in the medical field as a surgical assistant on an arctic whaler and later as an ophthalmologist before devoting himself full-time as an author. His background in medicine and his affiliation with physicians skilled in the art of observation and diagnosis permeate his fictional work. His stories are distinguished by their rich detail of medicine and pathology, and diseases feature as “both major and minor characters.” (2)

Over sixty medical conditions, twenty drugs, nearly forty doctors, twelve medical specialties, and six hospitals enliven the background of the Holmesian canon (3). Most notably and recognizably, the character Sherlock Holmes was inspired by Doyle's mentor and medical professor Dr. Joseph Bell, a Scottish physician famous for his profound insights into human behavior and the importance of “noting the environment, the appearance, and the personal characteristics of [a] patient.” (4)

This practice of careful observation of every patient’s attribute as a necessary step in diagnosis, the art of both inductive and deductive reasoning, is as omnipresent throughout Doyle‘s literature as it is essential to the very character of Sherlock Holmes. However, despite his clear admiration for this skill, which constitutes the very backbone of his literary legacy, it took Doyle time to develop his eye for close and careful examination. Nowhere is this more evident than in his earliest and least known work, his medical thesis, which proposed a pathogenesis of syphilis based upon, well, rather elementary reasoning, dear Watson.

Syphilis was a long-simmering plague in the Victorian era, and in some parts of Europe an estimated 10% of men were infected. As such, the diagnosis and treatment of syphilis was a cornerstone of many a physician’s practice in the nineteenth century. It is no surprise that Doyle would choose to focus his academic energies on one of the leading medical conditions of his day.

Doyle’s thesis was written as a prerequisite for graduating from the University of Edinburgh Medical School in 1885 and explored the condition tabes dorsalis, the result of a chronically untreated syphilitic infection affecting the brain and peripheral nerves of the body. The eighty-three page, handwritten treatise featured the latest theories on the transmission and pathology of syphilis, some which persist today as verified fact alongside others that have been thoroughly dismissed. His leading hypothesis, unfortunately, falls squarely among the latter; it explored the premise that “vasomotor changes” play a key role in the pathogenesis of tabes dorsalis and detailed his treatment of a “tabetic” patient with nitroglycerin, a medicine frequently used to promote dilation of the arteries and veins. 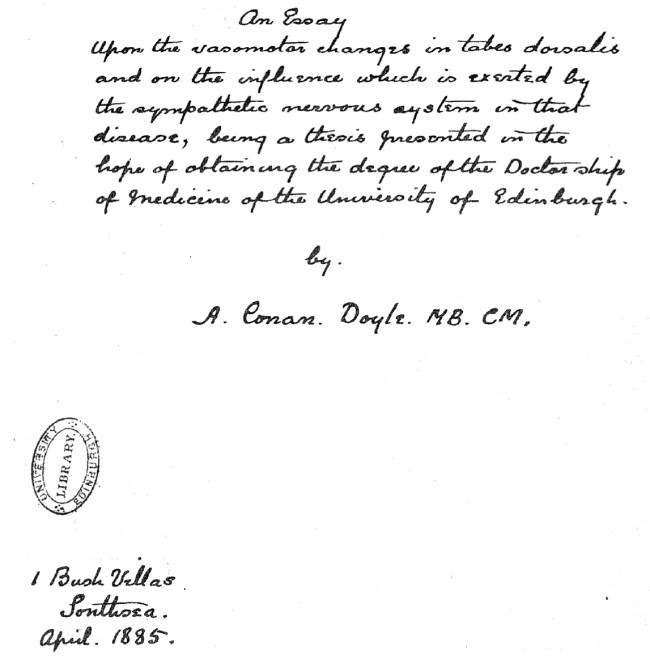 The ergot fungus grows on cereals such as rye and produces several neurological symptoms that were historically attributed to bewitchment for many centuries. Doyle observed that ergotism results in the constriction of blood vessels, producing similar signs and symptoms as tabes dorsalis. He reasoned that an identical mechanism of disease must lay at the heart of this advanced syphilitic infection, proposing that a “syphilitic poison was responsible for the constriction of small arterioles, which then secondarily affected the posterior columns of the spinal cord” and was thus responsible for many of the symptoms of sensory loss and imbalance characteristic to tabes (5). He inferred that the use of a vasodilator agent such as nitroglycerin would both counteract and alleviate these symptoms by dilating the constricted, syphilitic blood vessels (2).

The outcome of this unusual treatment, which departed from the meager yet prevailing treatments of that era, is unknown. He treated one patient with nitroglycerin and though the gentlemen made some improvements over a period of two weeks, he then skipped town, leading Doyle to lament that “it is such cases which tend to make medical men cynical.”(2)"Data! Data! Data! I can't make bricks without clay," laments Sherlock Holmes in “The Adventure of the Copper Beeches.” Perhaps we can take the same view of Doyle’s thesis. His interpretation of the pathogenesis of syphilis was unconventional, however his hypothesis was formed by means of what would eventually become his literary trademark - the observation of natural phenomena and the power of logical reasoning. Using the limited data of the time, at the cusp of his graduation from medical school, Doyle turned to solving one of the great medical conundrums of the Victorian era. It would be a practice that would jumpstart his career as an author, implementing the skill of inference and deduction to solve a mystery, only through an alternate persona. As his earliest work shows, however, the practice and art of medicine is not so elementary.Previously on Body Horrors The Inheritance of SyphilisPyromania! On Neurosyphilis and Fighting Fire with FireAbracadabra!Resources

Wikipedia is always here to help.

I know, I know. Call off the hounds - the signature phrase "Elementary, My Dear Watson" was never uttered by the infallible Sherlock Holmes.