Trio of 500-year-old mummies may have had atherosclerosis despite fishy diet. 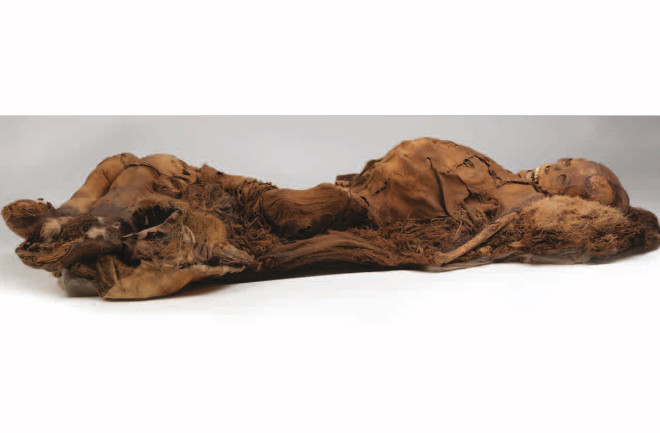 A trio of ancient Inuit mummies, the remains of young adults, showed signs of hardening and narrowing of the arteries, or atherosclerosis. (Credit: Courtesy of the Peabody Museum of Archeology and Ethnology, Harvard University)

A trio of mummies may unravel the decades-old adage that an active lifestyle and a diet rich in omega-3 fatty acids — such as those found in salmon, herring and other fatty fish — protect your heart.

Researchers used CT imaging to examine mummies of five Inuit adults who lived in Greenland about 500 years ago. The remains, naturally preserved in the environment's extreme cold, had been found by archaeologists in the 1920s and moved to a museum in Massachusetts.

The mummies included an infant and four young adults: two males, ages estimated at 18 to 22 and 25 to 30, and two females, 16 to 18 and 25 to 30 years old. The cause of death could not be determined for any of the individuals.

For the four adults, significant soft tissue remained, including arteries and other elements of the cardiovascular system, allowing researchers a good look via imaging inside the mummies — and that's where they found a big surprise.

Three of the four adult mummies had arterial calcifications — essentially, gunk that had built up in their arteries. These plaques are signs of atherosclerosis, which can lead to heart attack and stroke.

Atherosclerosis affects millions of people worldwide today and is implicated in up to 50 percent of deaths annually in westernized societies.

Ancient Evidence of a Modern Problem

Atherosclerosis is often held up as a modern scourge, the result of some combination of sedentary living, smoking and a lousy diet full of saturated fats and cholesterol.

The Inuit mummy analysis is not, however, the first time that arterial calcifications consistent with atherosclerosis have been found in pre-modern populations. Previous studies have found signs of the disease in ancient humans around the world going back thousands of years. Afflicted ancients included hunter-gatherers.

The Inuit mummies are, however, the first such case study involving pre-modern individuals who ate a marine-based diet, heavy on fatty fish and other omega-3 fatty acid sources. For decades, health care professionals — and eager supplement sellers — have touted omega-3s as good for your heart.

No Reason to go Cold Turkey on Tuna

While the discovery is unexpected, it doesn't mean it's time to trade in your poached salmon for a cheeseburger. The researchers caution that, due to the incomplete nature of the remains, they were unable to assess how extensive the calcifications were.

The team also noted that the ancient Inuit, like many preindustrial societies, used indoor fires. The smoke the fires produced, and heavy exposure to it in close quarters, could have been responsible for gunking up the individuals' arteries: a causative factor that even active living and omega-3s couldn't mitigate.