Superman's Clark Kent disguise might be more effective than you think. 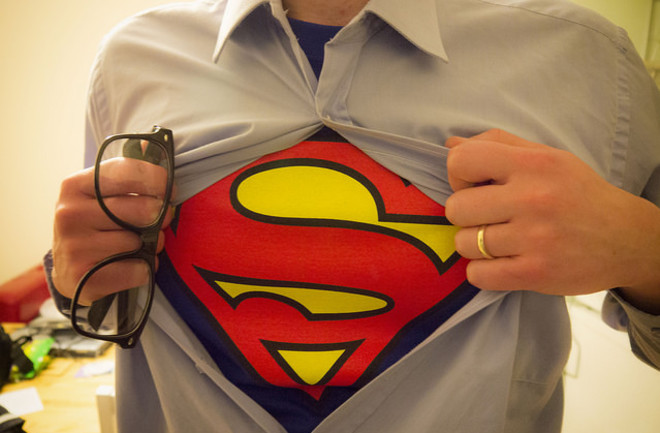 Photo: flickr/tom_bullockPeople often make fun of the fact that no one can recognize Superman when he puts on his glasses and becomes Clark Kent. It's just a pair of glasses, right? Not according to this study, which actually tested whether glasses interfere with people's ability to match two identical faces. The result? Glasses are actually a pretty good disguise, causing subjects to think the same face with and without glasses was two different people. It's a bird! It's a plane! It's... science!Disguising Superman: How Glasses Affect Unfamiliar Face Matching "Could a simple pair of glasses really fool us into thinking Superman and Clark Kent are two different people? Here, we investigated the perception of identity from face images with a task that relies on visual comparison rather than memory. Participants were presented with two images simultaneously and were asked whether the images depicted the same person or two different people. The image pairs showed neither image with glasses, both images with glasses, and ‘mixed’ pairs of one image with and one without glasses. Participants' accuracies, measured by both percentage correct and d′ sensitivity, were significantly lower for ‘mixed’ trials. Analysis of response bias showed that when only one face wore glasses, people tended to respond ‘different’. We demonstrate that glasses affect face matching ability using unconstrained images, and this has implications for both disguise research and authenticating identity in the real world." Related content: Pretending to have superpowers actually changes you.Scientists develop gecko-inspired glass climbing technology, perfect for your next Spiderman costume!Artificial material mimics cuttlefish skin by glowing when stretched.