Super-Size Me, Jesus: Last Suppers in Paintings Have Gotten Bigger 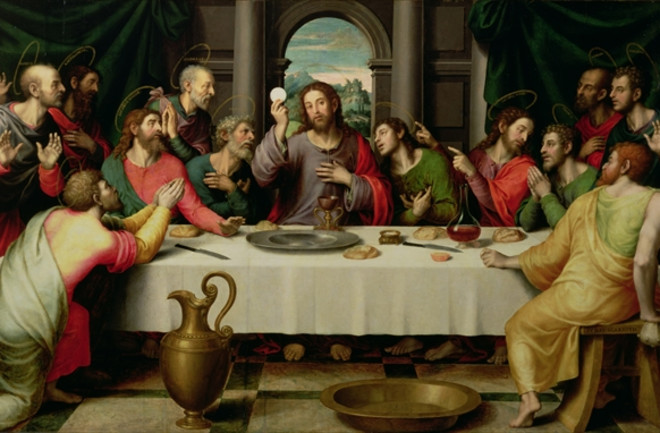 To chart the rise in obesity over the last 1,000 years, look no further than artists' depictions of the Last Supper. Researchers from Cornell University have found that as people began consuming more food over the centuries, more items have been added to the menu at the Last Supper. While the Bible says that Jesus and his disciples ate bread and drank wine, paintings of the meal over the last 1,000 years have varied wildly and have featured fruits, fish, and even a head of lamb in one case. And painters haven't just added food items over the years; they've also increased the sizes of the plates and loaves of bread. Researchers say this points to a growing problem with portion size, which has contributed to the current obesity epidemic. The researchers arrived at their conclusions by studying 52 famous paintings depicting the Last Supper in the 2000 book Last Supper from Phaidon Press. The book includes works by such masters as El Greco, Leonardo da Vinci, Lucas Cranach the Elder, and Peter Paul Rubens. They then used computer-aided technology to analyze the size of the main meals, bread, and the plates relative to the average size of the disciples' heads. Reuters reports on the results:

The study found that, over the past 1,000 years, the size of the main meal has progressively grown 69 percent; plate size has increased 66 percent and bread size by about 23 percent.

The study was published in the International Journey of Obesity. Lead researcher Brian Wansink told The Guardianthat the heftier portions shown in the paintings in more recent centuries are congruent with the increased availability of food:

"The last thousand years have witnessed dramatic increases in the production, availability, safety, abundance and affordability of food.... We think that as art imitates life, these changes have been reflected in paintings of history's most famous dinner."

More From Discover
Health
Feeling Sleepy After a Thanksgiving Meal? It Might Not Be the Turkey
Health
Healthy Meals And Snacks Are Important For Kid's Brain Function
Health
4 Common Toxins Found in Everyday Foods
Environment
Investors Are Betting on Seafood Alternatives
Health
Dietary Supplements Are No Substitute For a Healthy Lifestyle
The Sciences
Craft Brewers are Using Stinky Yeast to Make Tasty Beer
Recommendations From Our Store
My Science ShopDiscover STEM Kits
My Science ShopDiscover 2022 Calendar
My Science ShopStrange Science
My Science ShopElements Flashcards
Shop Now
Stay Curious
Join
Our List