The Science of Virgin Birth 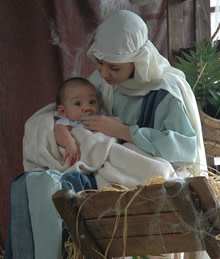 Virgin birth may sound like the stuff of myths and miracles, but now it's the stuff of science, too. In recent years, asexual reproduction, aka virgin birth, has been confirmed in a number of organisms. And we're not just talking about bacteria budding off one another. Large animals, like pythons, sharks, and komodo dragons, have been reported to reproduce with no sex involved. In these animals, the process is known as parthenogenesis, in which the females produce eggs that can develop without fertilization. Could parthenogenesis, or some other scientifically conceivable process, have been at work in the most famous virgin birth story around? Dr. Aarathi Prasad, who's writing a book about reproduction sans men, The End of Sex, ponders the question of Mary's virgin pregnancy in the The Guardian. She points out one major problem with Jesus's lack of paternity: that Jesus was male, presumably with an X and a Y chromosome. Since human females have only X chromosomes, there would be no way for Jesus to acquire his Y from Mary. Unless... After speaking with some geneticists, Prasad presents one "implausible possibility":

...Mary may have had a condition called testicular feminisation. Women with this condition have an X and a Y chromosome like a man, but their X chromosome carries a mutation that makes their bodies insensitive to testosterone. This leads to their developing as a female. Genetically male, and probably sporting ambiguous genitals, Mary would have been sterile. But had she become pregnant spontaneously, her child could have inherited an intact Y chromosome.

Jesus would also have needed a mutation that reversed the insensitivity to testosterone, inherited from his mother, to prevent him from also appearing female. Another slim possibility is that Mary was a genetic mosaic—the fusion of twins, one of which had a Y. Lest you think all this is just fancy talk, consider that scientists have already managed to induce parthenogenesis in a mammal. Kaguya the mouse, named after a mythological Japanese princess, was born 2004 years after Jesus, and like him, she has no father. Kaguya was born after scientists tweaked one set of her mother's egg genes to resemble sperm genes, thereby overcoming the problem of genomic imprinting. Related Content: DISCOVER: Mice Breed Without Fathers Discoblog: Female Shark Gets Pregnant on Her Own, No Male Required Discoblog: Religion: A Tool to Keep the Parasites Away?