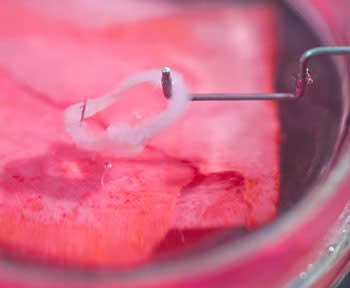 , that handy little ring of muscle that maintains the separation between your insides and your outsides. Researchers grew them from cells

, implanted them in mice, and compared the new sphincters' function with the animals', ah, native orifices. And apparently, they were quite satisfactory. You young whippersnappers out there might not realize it, of course. But malfunctioning sphincters are a big, messy problem as you get older, and a lot of people suffering from fecal incontinence

(including women recovering from births, which can put everything down there out of whack) could benefit from this research. Right now, Depends or surgery with high rates of complication are what people with damaged sphincters have to choose from, and the possibility of replacing the muscle is intriguing. The major step forward made here is that these sphincters, which were grown in a circular mold from human muscle biopsy cells and mouse nerve cells, could, by virtue of those nerve cells, communicate with the animal's nervous system, a level of functionality that had not previously been reached. The big-picture goal is to build new sphincters from patients' own cells, which could then be implanted without the immune system kicking up a fuss. Now that's what I call progress. Image: Wake Forest Institute of Regenerative Medicine ( Khalil Bitar et al)