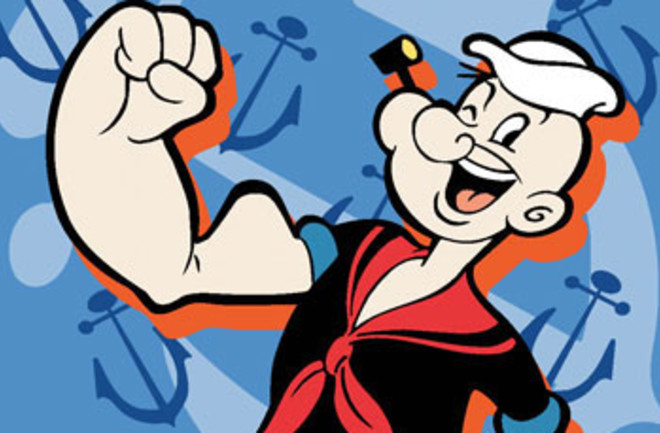 If someone thought you had an Elmer-Fudd temper or ears like Mickey Mouse, chances are you wouldn't feel complemented. And while having a butt like Popeye's bicep sounds even worse, it's actually a medical first, according to some scientists who, after diagnosing the first medically-described butt-muscle rupture, gave the condition the official name of "popeye gluteus." And the strange name isn't just frivolous: enlisting Popeye imagery is supposed to help doctors better visualize---and presumably diagnose---the injury. The story starts with an unfortunate 42-year-old English cyclist who got rear-ended (and I do mean "rear") by a bus one day, causing not only extensive bruising, but also a buttock avulsion: Medically speaking, his gluteus maximus muscle detached from his posterier gluteal line, though all the man knew was that he was in a world of pain. And this pain wouldn't go away; he couldn't stay seated for long periods of time, and---despite all efforts to rest---eventually couldn't even continue with his job as an aircrew member for the Royal Air Force. It was time to call in the experts.

So Thomas Wood and his medical colleagues at England's James Cook University Hospital checked out the victim's injury, and realized that although there have been hamstring avulsions, bicep avulsions, and many more, there had not yet been a documented example of a butt avulsion. And like any new malady, they needed a name. "Popeye gluteus" was agreed upon not because the bruising resembled a popeye-like black eye, but because the muscle deformity "was like a prominence that 'bunched up' when he tensed his buttock muscle," Wood said in an email. The photographs in their study didn't adequately capture the injury's protruding shape, and the name so supposed to tip off that the muscle actually popped up from its usual position. The name also refers to Popeye biceps, a known injury in which shoulders rupture and bicep muscles bunch up, and Wood's group just applied the same term to a ruptured buttock."We thought that describing the deformity as a 'popeye gluteus' would make people think of the 'popeye biceps' deformity in biceps rupture," adds Wood. With their new injury clearly defined, Wood and his colleagues successfully reattached the victim's gluteus maximus with his posterior gluteal line, and seven weeks later, "the patient reported being pain free," as Wood notes in his study. The patient even got a bonus, since he is also "happy with ... the cosmetic" result of the procedure as well. So the doctors have the satisfaction of a successful surgery, the patient can return to work, and Popeye gets good PR---in a case that gives everyone a good laugh. Related Content: Science Not Fiction: Why Keep Your Body? Help Yourself to Big Muscles, Cyborg Limbs, and a Big Booty Discoblog: NCBI ROFL: Hmmm...what should we call this new butt rash? Discoblog: The Dangers of Silicone Butt-Injections (in Sketchy Hotel Rooms) Discoblog: Fondling Swan-Butts For Science