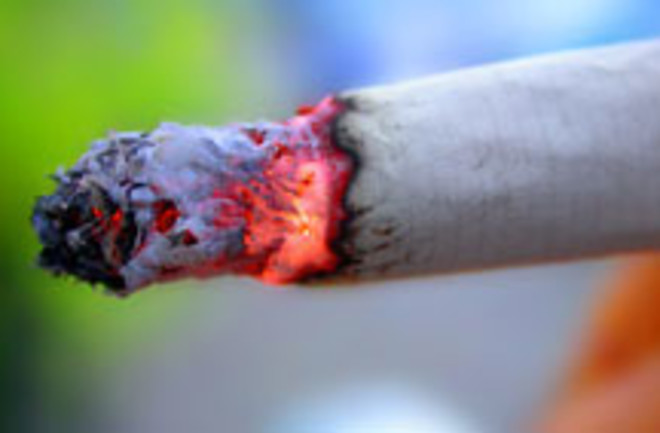 You might not be a smoker yourself, but hanging around people who are smoking can cause you to inhale noxious cigarette fumes. For years, scientists have cautioned against the ill-effects of such second-hand smoke. Now they're warning about the dangers of "third-hand smoke"—the chemical traces that cling to a smoker, and that are left behind in a room where someone has been smoking.

A team of researchers at the Lawrence Berkeley National Laboratory found that remnants of a smoke don't just inertly settle onto surfaces, they can react with a common gas (nitrous acid, which is emitted from gas appliances and vehicles, among other sources) to create carcinogenic compounds known as tobacco-specific nitrosamines (TSNAs) [Scientific American].

The study (pdf) was

published in Proceedings of the National Academy of Sciences.

The study suggests that even if a smoker puffs outside, some smoke swirls and settles in clothing and hair and is brought back into the building. With smoking inside, the left-over nicotine residue settles on surfaces like furniture, carpets, and curtains, where it can mix with common gas and turn into the carcinogenic TSNAs. Says study coauthor Hugo Destaillats:

"It's this third-hand smoke residue that is the source of the smells that we all easily perceive in a room or a car where cigarettes have been smoked, as a consequence of such places being coated with cigarette emissions.... And we found that such emissions do give rise to new pollutants when they react with non-cigarette compounds found indoors" [BusinessWeek].

To study how the carcinogenic compounds were created, scientists used samples from the glove compartment of a pick-up truck whose driver smoked in the truck regularly. They also studied a cellulose-containing paper similar to a carpet or drape and let it absorb nicotine from cigarette smoke. They then put this paper in a chamber containing nitrous acid and studied the reaction between nicotine and the nitrous acid.

In both the lab and in the truck, the reaction between nicotine and nitrous acid produced substantial amounts of three types of toxic compounds.... All three compounds belonged to a group called nitrosamines, which are known to prompt tumor growth [Discovery News].

The researchers say with so many toxic compounds, young infants could be at a risk as they crawl around on rugs and come into contact with dust. However, they also caution that there needs to be more research into third-hand smoke, and note that the study doesn't indicate that homes and couches that smell of smoke could potentially cause cancer. To deal with third-hand smoke, researchers recommend avoiding smoking in closed spaces like homes and cars. Also, in enclosed spaces that have seen plenty of puffs over the years, they suggest replacing furniture, carpet and even wallboard to cut down on the amount of TSNA exposure

Related Content: 80beats: Even Discreet, Conscientious Smokers Leave a Trail of "Third-Hand Smoke" 80beats: Electronic Cigarettes Not a Safe Alternative to Conventional Cigs DISCOVER: Smoking and Ethnicity DISCOVER: By The Numbers: Smoke Gets in Your Hair DISCOVER: 54: R-Rated Films Tempt Teenagers to Smoke