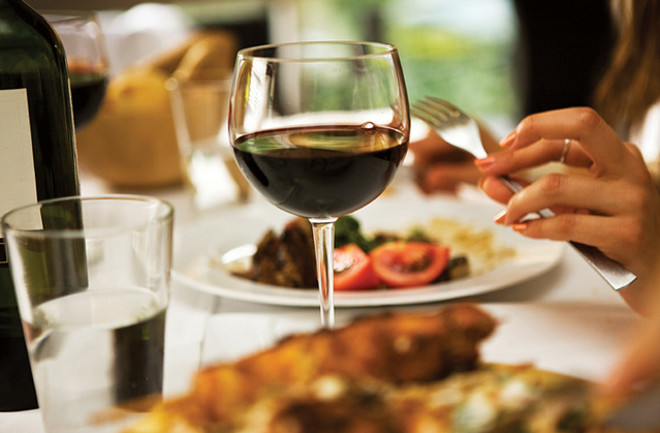 Photo: flickr/isante If you're a wine fan, listen up: apparently, having a glass or two of vino before a meal will make you eat up to 25% more food. In this study, scientists had subjects drink a half bottle of wine (Cabernet Sauvignon Shiraz by Calloway Crossing, 375 ml) either before or during a two-course lunch of garlic bread and Kraft pizza. According to the paper, "Energy intake from lunch was enhanced by 25% when the alcohol was consumed as an aperitif 20 min before lunch and by 22% when consumed with lunch compared to control." So, if you're trying to lose weight, you should consider skipping your usual lunchtime half-bottle of wine... which might also help your job performance. Acute effects of an alcoholic drink on food intake: aperitif versus co-ingestion. "To compare the effects on appetite and energy intake (EI) within a meal and across 4 days of drinking wine either before (aperitif) or with (co-ingestion) a meal, 11 men attended the laboratory on three occasions. On each occasion participants were given breakfast in the laboratory then 3 h later returned for a two course (garlic bread, pizza) lunch, then recorded food intake for the remainder of the day and the next 3 days. In the control condition, participants ate lunch ad libitum; in the aperitif condition 375 ml of red wine was consumed 20 min before lunch; and in the co-ingestion condition 125 ml of red wine was consumed with the starter and 250 ml of red wine was consumed with the main course. Subjective ratings of appetite and mood were administered before and after the meal. EI at lunch was greater when wine was consumed (p<0.01) (aperitif: 6436+/-435 kJ; co-ingestion: 6254+/-417 kJ) compared to control (5125+/-262 kJ). In particular, intake of the starter was enhanced by wine consumption. Having wine as an aperitif significantly influenced subjective ratings of light headedness and fatigue. These results suggest that the effects of wine on appetite are immediate, and stimulate food intake early in the meal. Total EI during the test days was significantly higher than during subsequent days revealing a tendency to overeat in the laboratory, exacerbated by drinking wine before or with lunch. However, lean healthy men adjusted total EI on the days following the laboratory in all conditions." Related content: Want to eat less snack food? Use a red plate.NCBI ROFL: Why watching the Food Network could sabotage your diet.NCBI ROFL: Craving chocolate? Try pottery instead.