Study: Gene May Make You Drunk Faster, But Could Stave Off Alcoholism, Too 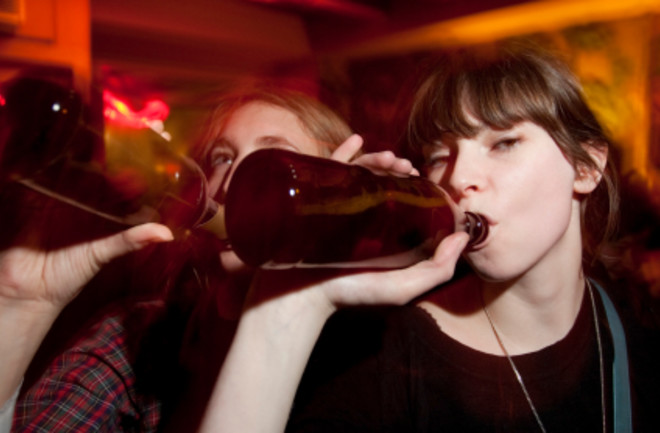 Next time you're at the pub with friends, take it easy on the lightweights—the ones who are getting a little silly after just a couple of drinks. That might be a blessing in disguise, according to a new study, because the 10 to 20 percent of people whose genetics make them especially sensitive to booze might also be at greatly reduced risk to develop alcoholism. In the journal Alcoholism: Clinical and Experimental Research, Kirk Wilhelmsen and colleagues identified a particular gene associated with the easily intoxicated. The gene in question encodes an enzyme called CYP2E1, responsible for metabolizing not just alcohol in the brain, but also other substances like acetaminophen (Tylenol).

The CYP2E1 enzyme works in the brain, which is not the major player in alcohol metabolism, says Wilhelmsen, a genetics professor at the University of North Carolina-Chapel Hill School of Medicine. Another enzyme, in the liver, "does most of the heavy lifting" in breaking down alcohol, he says. Apparently, though, CYP2E1 affects how sensitive the brain is to alcohol, perhaps because it — unlike the enzyme in the liver — generates free radicals, tiny molecules that can damage cells. [USA Today]

Wilhelmsen's study subjects were pairs of college-aged siblings, not alcoholics themselves but having at least one parent who is. After examining the students for the gene, the researchers served up a liquor and soda concoction with the strength of about three drinks under the standard classification system. Sure enough, there was a connection between those students who reported feeling drunk the earliest and the presence of a particular form of the CYP2E1 gene. So this genetic variant seems to have the opposite effect the of the so-called "happy hour gene

" announced last summer, which appeared to reduce people's sensitivity to alcohol and raise their risk of alcoholism. Could CYP2E1 be employed in some treatment against alcoholism? Perhaps one day, Wilhelmsen says, but not yet.

"We have found a gene that protects against alcoholism, and on top of that, has a very strong effect," Wilhelmsen says in a statement. "But alcoholism is a very complex disease, and there are lots of complicated reasons why people drink. This may be just one of the reasons." [UPI]

Discoblog: Why Do I Feel Woozy? I’ve Only Had One Enormous Glass of Wine