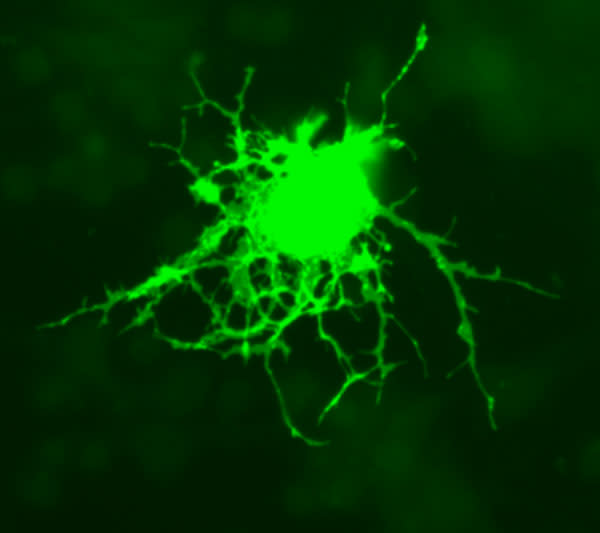 An oligodendrocyte---the type of cell that manufactures myelin.

At first, the infants seem to be progressing normally. But it soon turns out they may have vision or hearing problems, and when the time comes to lift their heads, the milestone comes and goes. It often gets worse from there. Children with the rare Pelizaeus–Merzbacher disease

, like others who lack the usual insulating sheaths on their neurons, have trouble controlling their muscles, and often develop serious neurological and motor problems early in life. There is no cure for the genetic disorder. Nor is there a standardized treatment. PMD, as it's called, and related diseases are some of the leading candidates for potential treatment with stem cells. The idea is that if stem cells that produce the missing insulator, the fatty substance called myelin, can be successfully implanted in the brains of patients, perhaps they will pitch in what the patient's native cells cannot. This week saw two incremental but encouraging advances toward such treatments, both published in Science Translational Medicine. In one study

, mice without the ability to make myelin were implanted with human neural stem cells that, within weeks, developed into myelin-making cells 60-70% of the time and produced the substance in the brain. In the other study

, four young boys with early onset PMD underwent an experimental treatment: the same type of stem cells were implanted into their brains, and, after 9 months of drugs to surpress the children's immune systems so the cells could take hold, MRI exams, psychological tests, and motor tests are consistent with more myelin having formed. Since there was no control group in the human study, the scientists have no way of knowing whether the new myelin formation is actually due to the implanted cells (for that, they would need a group of boys who received every step of the treatment except getting the cells, to compare). And there are, of course, only four subjects. But the fact that there have been no major side effects---especially tumors, which not unheard-of after stem cell treatments---is in and of itself heartening. It indicates that future studies using these cells can tentatively proceed.