Stem cells only grow up properly in the right environment

Children can be fed with good food but they will only become productive members of society if they're raised in a rich, nurturing environment. Now scientists have shown that the same is true for stem cells. 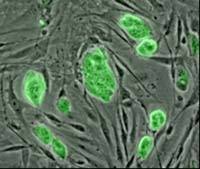 Our bodies are made up of hundreds of different types of cells, but stem cells can become all of them. For example, one group - the mesenchymal stem cells (MSCs) - can give rise to nerve cells, muscle-building cells, and bone-building cells.

Because of this ability, many scientists have lauded stem cell treatments as the next big thing in medicine. Injuries and diseases could be treated by using a patient's own stem cells to grow genetically matching tissues and organ.

Some therapies, such as bone marrow transplants for leukaemia patients, are now in limited use and others are at the experimental stage. But overall, progress has been slow and stem cell research has been beset by a range of technical (not to mention moral) difficulties.

One of the main challenges has been finding out how to consistently get stem cells to produce the right type of daughter cell. Stem cells take a wide range of variables into account before they commit to becoming a specific cell type. These include the chemicals and proteins that they are exposed to, how closely packed they are, and even their shape. Adam Engler and colleagues from the University of Pennsylvania can now add another thing to this list - their surroundings.

Like unruly teenagers, stem cells only reach their true potential when they leave home. They only convert into more specific cell types once they've dispersed from their place of birth and relocated to new locations around the body. These new environments can be as different as brain, muscle and bone.

Engler and his colleagues have found that the textures of these new homes provide important information to the wandering cells, telling them which cell types to produce. Muscles are 10 times more elastic than bone, and brain tissue is 10 times more elastic still. Engler mimicked these properties by growing MSCs on different consistencies of collagen gels, some more rigid than others.

He found that cells produce nerve cells (neurons) when they grow on soft gels that resemble brain tissue. Others that grow on stiffer muscle-like gels, produce muscle-building cells, or myoblasts. And those grown on rigid gels that mimic bone, produce bone-building cells, or osteoblasts. Even though the cells were exposed to the same chemicals and proteins, they committed to radically different lineages based on how elastic their surroundings are. 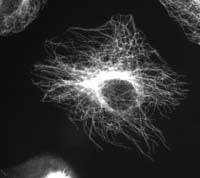 How do the stem cells measure the stiffness of their environment? Engler thinks that the answer is simple - they pull. Each cell has an internal skeleton of thin fibres that give it support (seen in white in the image on the right). These fibres touch the cell's outer layer at specific points, and the cell makes contact with its environment at these same points.

By exerting tension along these fibres, the cell can sense how elastic its surroundings are. This information is conveyed through a series of messenger molecules and tells the cell which path to take. It seems that even for stem cells, commitment comes only after a period of tension.

The importance of a stem cell's environment could have large implications for future research. For example, attempts to treat heart attacks with transplanted stem cells have largely failed. It has proven difficult to convince the transplanted cells to regenerate dead heart muscle, and Engler's study may tell us why.

Injecting the cells into damaged hearts wouldn't work because they would be surrounded by scar tissue. To achieve the best results, the stem cells' new surroundings must be carefully managed to provide the right conditions for their development. The same lesson is relevant to doctors looking to use stem cells to restore wasted muscles or dead nerve tissues. Success may depend on finding out how different stem cells respond to elastic or rigid environments, and how we can imitate these conditions in damaged tissues.