Sporadic Fainting Sends a Woman to the Hospital. What’s Causing Her Lights to Go Out?

A woman keeps passing out, and no one can figure out why. 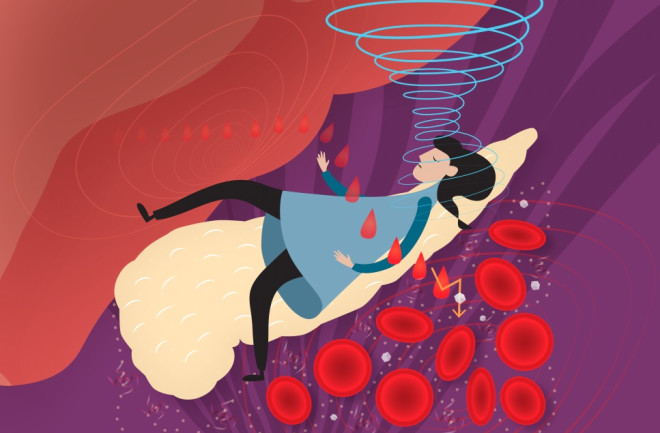 This article appeared in the June 2020 issue as "Downward Spiral." Subscribe to Discover magazine for more stories like these.

Tegan, a middle-aged elementary schoolteacher, had become lightheaded and collapsed in front of her students. She hit her head against her desk, cutting open a gash on her forehead — a chaotic scene that had her rushed to the hospital in the middle of the school day.

When I first met her in the emergency room, Tegan was sitting up in bed, voraciously eating a full tray of food. Fresh stitches adorned her bruised forehead as she relayed her story to me. She was angry and embarrassed that her students had to witness such an event, but it wasn’t the first time Tegan had experienced an odd bout of lightheadedness.

Tegan said that over the previous few weeks she had undergone several similar episodes without a clear trigger. Some were worse than others: Sometimes she just got shaky and hungry and recovered by sitting down and eating something quickly. Other times she passed out. She could be walking between rooms at home only to suddenly wake up lying on the carpet without a clear notion of how she got there. Some episodes were preceded by dizziness or double vision, others not.

My initial evaluation of Tegan didn’t reveal much. Her blood tests in the ER were all normal, or very close to normal, and a CT scan of her head was also unremarkable. Before I was asked to see her, she had been paid a visit by our neurologists to determine whether she was having epileptic seizures, but an electroencephalogram — a study of her brainwave patterns — showed no abnormalities. Tegan had a distant history of drug use, but blood tests for illicit substances were negative.

At this point, she was feeling better and wanted to go home, so we made preparations for her to be discharged. We set up an appointment for her to see me in one week for more testing.

But three days later, Tegan was back in the emergency room.

This time, Tegan had blacked out while driving and crashed her car into a telephone pole. Fortunately, she was driving slowly, and her airbag had deployed. She was more bruised than anything, but clearly her situation was escalating. To make matters worse, since her episode in the classroom, she had been placed on medical leave and could not teach.

The EMTs who arrived at the crash checked Tegan’s blood sugar level and found it to be fairly low. I recalled that during her last admission her blood sugar had been slightly low the one time it had been checked. This raised the possibility that Tegan was having hypoglycemic episodes, but her blackouts were more severe than what we’d typically see in patients with hypoglycemia. In addition, many patients who have hypoglycemia are diabetics who have treated their chronically elevated blood sugars too aggressively. Tegan wasn’t diabetic.

I ordered a series of regular blood tests to check Tegan’s blood glucose level. Sometimes it was normal, but she had a strong trend toward very low blood sugar. In healthy individuals, a normal blood sugar level is less than 100 milligrams per deciliter after an eight-hour fasting period. Regular levels should be less than 140 mg/dL two hours after eating. Tegan’s blood sugar was often less than 50 mg/dL, even after she ate — an unusually low result.

In humans, insulin functions to drive glucose out of the bloodstream and into the cells, functionally lowering the overall blood glucose level. Serial checks of Tegan’s blood insulin level showed wide fluctuations throughout the day, from normal to quite high. This provided a valuable clue: Too much insulin was forcing glucose out of Tegan’s bloodstream, causing her to experience episodes of hypoglycemia, which caused her blackouts. But where was the insulin coming from?

Some patients, for a variety of reasons — such as faking illness, for example — will surreptitiously administer insulin to themselves to trigger episodes similar to what Tegan was experiencing (a condition known as factitious hypoglycemia). I needed to check if the insulin in Tegan’s blood was made by her body or if it was coming from some outside source.

The tests showed that Tegan’s body was indeed producing high levels of insulin. All signs pointed to the possibility that Tegan had what is known as an insulinoma, an extremely rare, insulin-producing tumor. Patients with even tiny insulinomas can produce very high levels of insulin because the tumor ignores the usual metabolic checks and balances that allow the body to produce just the right amount. In patients with insulinomas, the tumor makes insulin all day long at haphazard rates, causing wild fluctuations in blood sugar levels.

Insulinomas arise in the pancreas, so I arranged for a CT scan of Tegan’s abdomen to get a good look at the organ itself. The radiologist saw no tumor. This didn’t mean much, though, because insulinomas can be notoriously difficult to find. A tiny, subcentimeter tumor can produce a tremendous amount of insulin and cause all of the symptoms Tegan was dealing with.

A higher-resolution abdominal MRI scan also failed to show a tumor, as did a special nuclear medicine scan. But since our lab tests showed that Tegan’s body — not some outside source — was producing the insulin, I knew the insulinoma had to be there.

In the past, the treatment for a patient with a suspected insulinoma was to surgically resect the pancreas in stages until the tumor was found. While effective, this resulted in the sacrifice of a lot of healthy pancreas tissue before the lesion was identified. And once pancreatic tissue is lost, it can never regrow.

We were eager to avoid this approach, so a more precise test was still needed. The last option before surgery was an endoscopic ultrasound, a procedure in which a flexible camera with an ultrasound probe built into the tip allows physicians to see the pancreas in tremendous detail. After bringing her to a procedure room, I sedated Tegan, inserted the endoscope and looked at her pancreas in sharp detail from top to bottom.

I was able to spot a very subtle, 4-millimeter area at the margin of the pancreas that looked suspicious. The tissue was sampled via biopsy, and the pathology report confirmed that we had found the elusive tumor. Now the surgeons knew exactly where to resect without having to remove excess healthy tissue.

A few days later, Tegan underwent surgery to remove the lesion. Within hours, her blood sugars normalized as her body was now able to regulate her insulin levels. Once Tegan recovered from the procedure, she was able to return to teaching, driving and the rest of her regular activities. It only took a 4-millimeter tumor to turn her world upside down, but things were finally looking up again.

Douglas G. Adler is a gastroenterologist and professor at the University of Utah School of Medicine. The cases described in Vital Signs are real, but names and certain details have been changed.

More From Discover
Health
What Legalizing Marijuana Does to Synthetic Poisoning Cases
The Sciences
How Do Parents Understand A Baby's Cry?
Mind
People Are Drawn To Others With Similar Body Odor
Health
Researchers Restore Cell and Organ Function in Pigs After Death
Mind
Could Brain Injuries Explain King Henry VIII’s Tyrant Behavior?
Health
The Gray Area of Miscarriages in the Post-Roe World
Recommendations From Our Store
My Science ShopDiscover STEM Kits
My Science ShopDiscover 2022 Calendar
My Science ShopStrange Science
My Science ShopElements Flashcards
Shop Now
Stay Curious
Join
Our List