Spending Lots of Time Indoors? Here’s How to Improve Air Quality in Your Home

More time at home means more exposure to indoor allergens like pet dander and dust mites. There are a few steps you can take to keep these culprits from causing allergy and asthma flare-ups. 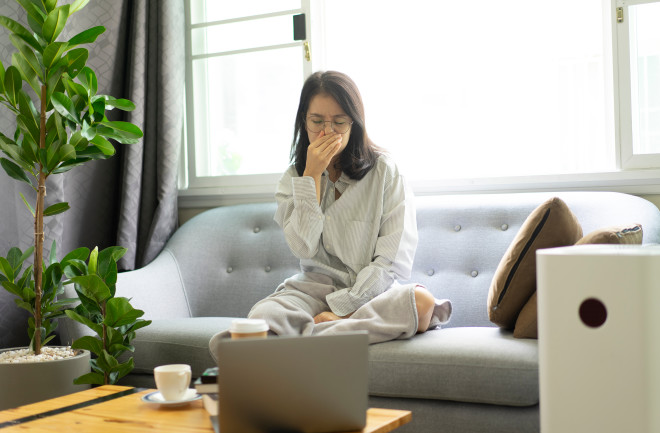 Alas, despite spending all of spring indoors, you could still be sniffling and wheezing from allergies.

That’s because particles that kick off allergic reactions or asthma attacks abound inside. Generated by pets, mold and dust, these triggers build up over time and can reach even higher concentrations indoors than they do outdoors.

Americans already spent up to 90 percent of their time inside before COVID-19. Now, with so many of us rarely leaving our homes, it might be a good time to address all those allergens you’re stuck living with for the foreseeable future. “We are telling people to stay at home now because of the virus,” says Jay Portnoy, a pediatric allergist with the Children’s Mercy Hospital in Kansas City, “and we want to make sure the home is a healthy place to stay.”

“It’s well known in air pollution research that those who are disadvantaged share a bigger burden of impact from air pollution,” says Mary Prunicki of Stanford University’s Sean N. Parker Center for Allergy & Asthma Research. Low-rent apartments next to a highway, for example, put those residents close to a continuous flow of car fumes, she says.

Read more: Why Do We Have Allergies?

If someone in your household is bothered by whatever is floating in the air, preventing the allergens is preferable to trying to remove them after the fact. That might mean taking a measure as extreme as giving up the family pet — or, at least, not allowing it into the bedroom at night, Portnoy says. Dehumidifiers and air conditioning can keep mold from growing and stave off dust mites, which don’t survive at humidity levels below 35 percent. And wash your bedding regularly. (Regardless of allergens, actually. “It’s gross not to,” says Portnoy.)

Other contaminants that might irritate the lungs are worth ditching, too. Avoid tobacco smoke, and if you have to live with a smoker, consider an air purifier, Prunicki says. While it might be tempting to plug in an air freshener to make a space smell cleaner, Portnoy says the scents simply add another layer of potentially irritating chemicals that mask the underlying air quality issues. “It’s better if you can smell the problem,” he says.

When taking care of allergens after they arrive, remember that not all bothersome particles can be treated with the same measures. Pet dander is lightweight and floats around for a long time, so air filtration can help suck the irritant out of your breathing space. If that’s something you’d like to try, Portnoy recommends outfitting the bedroom with a HEPA — or High-Efficiency Particulate Air — filter, something that can be attached to an HVAC system or a free-standing air purifier. Just make sure the device and filter are appropriately sized for the room they’re in. “You can’t put a small unit in an auditorium and expect it to work,” Portnoy says.

Dust mites, however, only launch into the air when they’ve been disturbed, making them difficult to eliminate with air filtration. For those, Portnoy suggests trying mattress and pillowcase covers that protect against the tiny arthropods. Regular cleaning with a high-efficiency vacuum could help too.

HEPA filters in air purifiers have also been shown to help reduce symptoms in asthmatics, Prunicki says. The devices can block some pollutants and contaminants, like combustion byproducts. One study, funded in part by the safety certification company Underwriters Laboratories, spelled out the potential benefits with 43 asthmatic kids who slept with a HEPA air purifier in their rooms. After two weeks, levels of an inflammation marker in their airways dropped by about 27 percent.

Half a month isn’t long enough to see a reduced number of asthma attacks from this intervention, says study co-author Jim Zhang, an environmental health researcher at Duke University. That’s something a longer study could reveal, which he and his colleagues think these initial results in JAMA Pediatrics warrant. “Prevention is so important,” Zhang says. “I hope that message will get out.”

Prunicki thinks it’s logical to keep asthma and allergy flare-ups — and their associated inflammation — at a minimum right now.

“If I had asthma, I’d not be wanting to have an exacerbation and then go out and get food and be exposed to people,” she says. While the Centers for Disease Control and Prevention notes that those with respiratory conditions like asthma may be at a higher risk of developing more serious COVID-19 symptoms, it’s still unknown if those with asthma or allergies are at a higher risk of contracting the virus.

Prunicki is on one of the research teams trying to study the relationship between asthma and COVID-19 susceptibility and severity. “If there’s a higher rate of infection in counties where asthma rates are higher, then it certainly makes sense to do anything you can to keep your asthma under control,” she says.

Until the research confirms or dismisses that relationship, at least there are a few ways you can try and breathe easier at home.

More From Discover
Health
Will COVID-19 Need an Annual Vaccine Like the Flu?
Health
What New Variants Of COVID-19 Are Currently Circulating?
Planet Earth
Viruses Could Cause Wolves to Change Colors
Health
Here's Why Coronavirus Cases Are Surging in China
Health
Scientists Say Corpses Can Carry and Spread COVID-19
Health
How COVID-19 Developed in 2022 and What to Know for the Coming Year
Recommendations From Our Store
My Science ShopDiscover STEM Kits
My Science ShopDiscover 2022 Calendar
My Science ShopStrange Science
My Science ShopElements Flashcards
Shop Now
Stay Curious
Join
Our List