Special Seaweed-Chomping Bacteria Found in the Guts of Japanese Diners 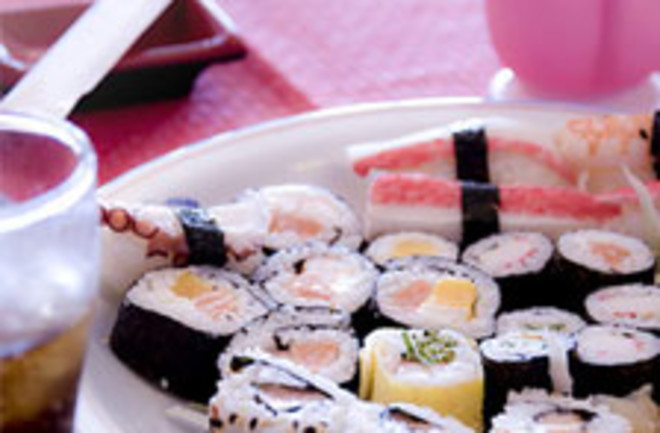 Here's a new way to prove the maxim that we are what we eat: Take a peek into the teeming universe of bacteria that thrive in a Japanese person's gut. Trillions of microbes in the gut help digest the foods we eat, and researchers have found that the "gut microbiomes" of Japanese people have adapted over the centuries to help digest seaweed--an integral part of sushi. Remarkably, they adapted by taking in genetic material found in that very sushi. The new study, published in Nature, reveals that these gut bacteria engaged in a gene swap, grabbing algae-digesting genes from marine bacteria that live on red algae like nori, the seaweed used to wrap sushi. The marine bacteria traveled on the seaweed into human digestive systems, where the crucial genes were transferred to bacteria in the gut. Scientists stumbled on this swap when they identified a new group of enzymes from the algae-chomping marine bacteria that help the microbes break down the unique carbohydrates in seaweed. When they searched for other organisms that had the same enzymes, they found one match that, oddly, came from a species of bacteria that lived in the gut of a Japanese volunteer. Further study revealed that this species of gut bacteria is seen only in Japanese individuals.

For an in-depth look at what the horizontal gene transfer means and how this could affect your sushi-chomping habits, turn to the new DISCOVER blog Not Exactly Rocket Science and Ed Yong's illuminating post, "Gut bacteria in Japanese people borrowed sushi-digesting genes from ocean bacteria."