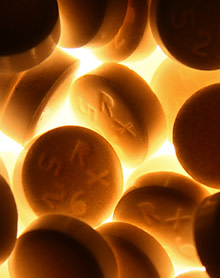 In the U.S., the kids are snorting Ritalin to get high. But in South Africa, the newest abused prescription drugs of choice are HIV drugs. Teenage schoolchildren in South Africa have been seen grinding up anti-retroviral pills and smoking them, sometimes mixed with painkillers or marijuana. The children say they are buying or stealing the drugs from HIV patients and healthcare workers. Tooli Nhlapo, a documentary filmmaker for the South African Broadcasting Corporation, was shocked when she first observed the children smoking the pills. Meant to boost the immune system and help the body fight off HIV, the drugs apparently produce a hallucinogenic effect when smoked. "When I asked them why they like doing it, they said it helps them relax and forget about their problems," she said. What Nhlapo first thought was an isolated incident may turn out to be a nationwide problem: Many people in the areas she visited were aware of the new way to get high. Doctors say the abuse of HIV drugs is particularly worrisome if the drugs are coming from HIV patients, because these pills need to be taken as part of a cocktail of several drugs to have optimal effect. To make matters even worse, South Africa has one of the worst HIV/AIDS epidemics in the world, with an estimated one-fifth of the population infected. The government-supported treatment program, which distributes anti-retroviral drugs, has only been in effect since 2004. Related Content: DISCOVER: Why Is AIDS Worse in Africa? DISCOVER: First New Class of HIV Drugs in 10 Years