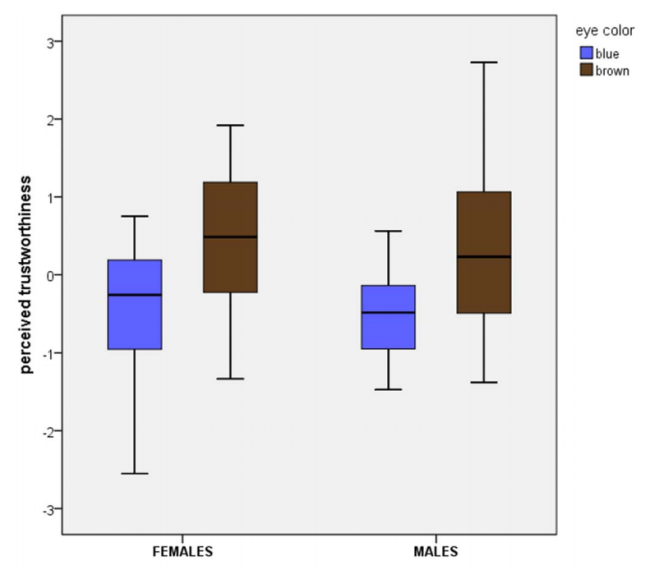 Over at Scientific American Christie Wilcox has a post up with the provocative title, People With Brown Eyes Appear More Trustworthy, But That’s Not The Whole Story, which reports on a new PLoS ONE paper, Trustworthy-Looking Face Meets Brown Eyes. Like Christie I would enjoy illustrating this post with my own trustworthy and youthful brown eyed visage, but I worry that my mien is a bit on the sly side! In any case, what of the paper? Wilcox reviews the salient points of the results. In short,

the issue here is that brown eyed men seem to have more 'trustworthy faces' than blue eyed men.

When the eyes were digitally manipulated it turned out that color had no influence on perception. Rather, it was the correlation between eye color and facial proportion which which was driving the initial association. Christie finishes:

Given the importance of trust in human interactions, from friendships to business partnerships or even romance, these findings pose some interesting evolutionary questions. Why would certain face shapes seem more dangerous? Why would blue-eyed face shapes persist, even when they are not deemed as trustworthy? Are our behaviors linked to our bodies in ways we have yet to understand? There are no easy answers. Face shape and other morphological traits are partially based in genetics, but also partially to environmental factors like hormone levels in the womb during development. In seeking to understand how we perceive trust, we can learn more about the interplay between physiology and behavior as well as our own evolutionary history.

These findings do pose evolutionary questions, and I am interested in the correlations of behavior and eye color, and I have been so in the past. But, I have many qualms about the reliability of this literature now. When I read the post initially my eyes immediately sought out the plot you see above. Observe the intervals. Such intervals would not concern me in a simpler design, or in a model where the hypothesis already had prior support, but this is a peculiar and potentially counter-intuitive result. Additionally, if you peruse the methods section of the paper notice the attempts to control for demographic confounds in the linear regression model. There's nothing wrong this, and due to the nature of the sample size (< 100) there was no chance that they'd get a perfectly ideal study population. But these sorts of statistical techniques are exactly the flavor of powerful tools which have been so abused in psychology and biomedical science, consciously and unconsciously. You can squeeze a correlation out of a rock. This is an area where Jim Manzi would say we're confronted with 'high causal density.' There is a literature which suggests that there are behavioral differences between blue eyed and brown eyed children. Unfortunately when Jason Malloy looked to see if there were differences in the huge NLSY data set he couldn't find it. This doesn't mean that there aren't differences between individuals that differ by this phenotype, but the difference might be subtle, and one needs to tease apart various confounds. It reminds me somewhat of the confused literature on sexual attraction and MHC. There may be something there, but the papers often present contradictory results, or add a complexifying layer (e.g., you are attracted to individuals who smell different from your opposite sex parent, but not too different). To cut to the chase on this specific paper and results, would I bet money that this will pan out? No. I think the results are probably not robust. Do I think that there are going to be biobehavioral differences between individuals with blue eyes vs. individuals with brown eyes? Here, much more cautiously, as my confidence is low, I think there actually will be found to be some phenomena of interest and difference. What one needs to do in this case I think is look at sibling pairs. Because as it happens due to the genetic architecture of eye color inheritance in Europeans you have a huge potential sample space of siblings with different eye colors, who share much genetically, and a common home environment. Which brings me to genetics and evolution. Though I might nitpick with the methods and results of the paper which Christie reviewed above, I think they're defensible, as far as it goes. But some of the discussion really leaves me scratching my head:

Therefore, we tentatively suggest that a combination of sex linkage and sexual selection is the most probable explanation for the reported covariance between brown eyes and trustworthy-looking faces. Also, the blue-eyed phenotype is

, most likely one favored by sexual selection...that compensates for the loss of perceived trustworthiness. The trade-off between a preference for colorful and visible physical features and the advantage of a trustworthy-looking face might have contributed to the high variability of European eye and hair color.

Consider this sentence: the dry earwax phenotype is now abundant in Eastern Asia and hence it should have some kind of adaptive advantage. Just because a trait is abundant does not mean that it is selectively advantageous. Rather, pleiotropy means that traits without advantage may spread, just as hitchhiking during a selective sweep can result in the spread of alleles which are not the direct targets of selection. Though the authors allude to the genetic literature (and it is cited), they do not explore it in much detail. This is a shame, because the genetics of blue eyes have been well explored in the past 5 years. I'd hazard to assert that we now understand it.

Heterozygote (my daughter) The inheritance pattern of blue and brown eyes was one of the classic illustrations of the recessive expression of phenotypes in Mendelian genetics. In other words, two blue eyed parents could only give rise to blue eyed children, while brown eyed parents could potentially give rise to both eye colors, because the brown eyed phenotype was inclusive of homozygotes and heterozygotes (brown being dominant to blue). This is informative, but it is too simple a description of the way inheritance works in the real world. About ~75% of the blue vs. non-blue eye color variation in Europeans seems to be due to a locus which spans the genes OCA2 and HERC2. There are assorted modifier genes, but to a first approximation it is this locus which classic Mendelian models were detecting in terms of segregation within the population. But ~75% is not 100%, and there are more eye colors than blue and brown.

In other words, eye color inheritance is complicated, but not too complicated.

Perhaps a more important point is that the OCA2-HERC2 region is not limited to iris pigmentation in its effect. This was originally a region where an albinism mutation was localized. There is evidence that it impacts skin color in Europeans and Asians. And, these variants in this region do seem to be targets of natural selection. One immediate thing that jumps out at you for the European variants is that they are characterized by a long block of the genome which is co-inherited together, a hallmark of recent natural selection. Second, it is important to note that the block is long for another reason. And that reason is why I'm skeptical that the reason that this region was selected initially for blue eye color. Though the original recessive expression single gene model is too simple, it is correct that most individuals with blue eyes tend to be homozygotes. This means that in the initial stage of the allele's increase in frequency trajectory it will rise in proportion very slowly, because most variants will be in heterozygotes, and so would not be favored by natural selection. Rather than a very long homogeneous block you'd expect a narrower region, because recombination will have mixed & matched the region during the early phase. This may all sound abstruse, but evolutionary hypotheses are most persuasive when they rest on a solid genetic basis. We have a good understanding of the genetics of eye color, and a more modest one of its evolutionary history. We should leverage that. It was my intent over the course of this post to back into a domain with lower 'causal density.' The genetics of eye color is not really simple, but it is intuitively tractable. In contrast the story outlined in the PLoS ONE strikes me as problematic because though the results are statistically significant in some specific conditions, the overall story is complicated, and requires some unpacking. A more general issue which goes at the heart of the problem of constructing plausible evolutionary stories for the origin of phenotypes is there are many, many, phenotypes. Probing for correlations across any pair of phenotypes, most of the time you won't find one (at least to statistical significance). But the process will eventually yield correlations. Some will be giving you much insight, but many will be spurious. So what is a future avenue of exploration of this topic? I'm interested in genetics, so you know where I would go. Look at the sibling pairs, and see if the correlation with face shape and eye color holds. But more importantly the genetics of facial morphology are finally starting to be elucidated. It turns out that the trait is highly polygenic, with each locus predicting only a small proportion of trait variance. To me this poses an immediate problem in attempting to posit a genetic correlation with eye color, since that trait has a genetic architecture where most of the variance is localized around one region of the genome. But the difference in face shape here may be much more subtle, and so not picked up in the GWAS analyses which have recently come out. What I'm hoping for in the future are simple explanations of very large data sets. Here we got a somewhat complex explanation for a not so large data set.