Should You Walk or Run for Exercise?

Walking is good for you, but running might be twice as beneficial. Here's why. 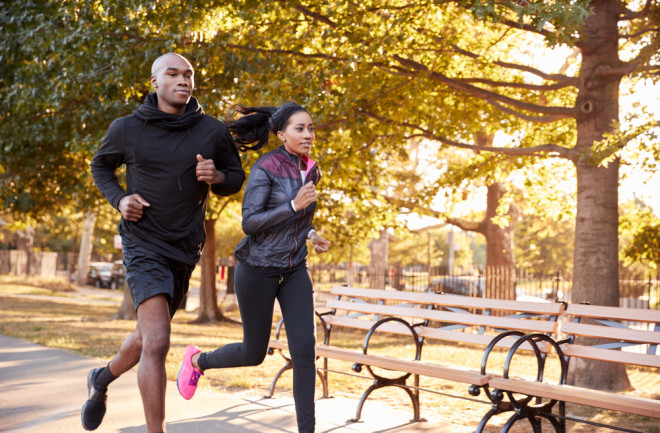 Spring is upon us in the Northern Hemisphere, and many people are looking for ways to stretch their legs, get out of the house, and maybe even burn some calories while they’re at it. We all know that regular exercise offers many physical and cognitive benefits, and more recently we’ve learned that walking might be one of the best exercises for health. But what about running? Is it like walking, only better?

Plenty of studies have delved into the benefits of walking. There’s sound evidence that walking is good for mental health, particularly for combating symptoms of depression. A 2019 study in Environment International found that living near water is supposedly good for your health — and it’s because people in coastal areas are more likely to be physically active, especially walking. Getting your steps in can increase life expectancy — especially from brisk walking. And studies have shown that physical activity is good for you even if you don’t lose weight.

Getting in Your Steps

There's no such thing as overdoing it when it comes to walking and your health. But about 7,000–8,000 steps per day are a good minimum target for most people, explains Duck-chul Lee, an associate professor of kinesiology at Iowa State University. But should you walk or run your steps?

Even a slow jog counts as vigorous, which means picking up your pace just a little bit could double your health benefits.

Researchers estimate that runners have a 30 to 45 percent lower risk of all-cause mortality and that they live, on average, three years longer than non-runners. Running seems to have a particularly pronounced health impact when it comes to cardiovascular disease and cancer: Runners are 45 to 70 percent less likely to die of cardiovascular disease, and 30 to 50 percent less likely to die of cancer. Although runners might also be less likely to smoke or be overweight, these estimates come from studies that have controlled for those types of confounding factors.

Any running is better than no running, but more running doesn’t necessarily lead to more health benefits. “It is still controversial if there is an upper limit of running beyond which more running may not provide further health benefits, particularly on the heart,” explains Lee.

Lack of physical activity is the fourth most-important global risk factor for death. Lee’s team has found that even five minutes of running a day was beneficial for health, reducing the risk of premature mortality by heart attack or stroke. This is especially noteworthy when you consider how accessible running can be in terms of things like cost and access to equipment when compared to other exercise regimes. “It’s one of the most convenient and popular types of physical activity that can be done anytime, anywhere, for most individuals,” Lee says.

Of course, running isn’t for everyone. Lee says that “although running can be good for weight loss, it is important for inactive people with obesity to start with walking.”